Did You know? - Trapping & Ambushing 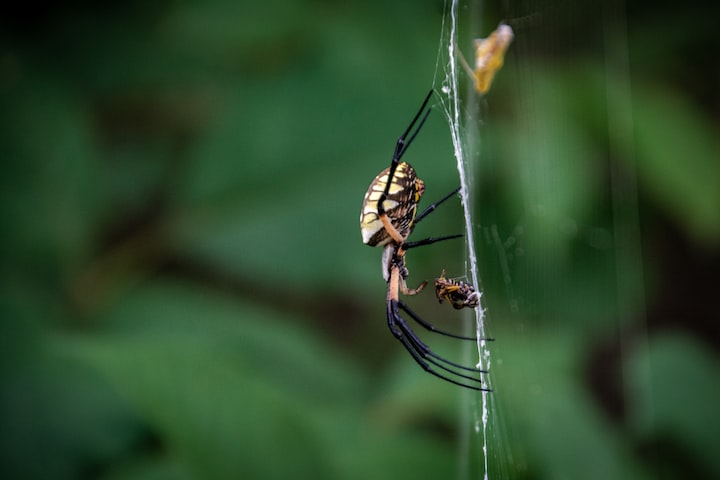 Photo by Yannick Menard on Unsplash

These predators – who are not just spiders – are carnivorous animals that capture their prey with surprise attacks. The ambush can be accomplished by hiding in a burrow, camouflage, aggressive mimicry, or by the use of a trap.

What are spider webs?

Spider webs are made from silk, which is a protein fiber. Spiral orb webs are the most common spider webs that we are all so familiar with. However, there are other types as well:

Sheet webs – These are horizontal sheet-like webs. They are constructed with individual thick strands with crisscrossed threads in between. Some species make two layers and hide between them for protection.

Funnel webs – These are non-sticky funnel-shaped webs that are used as burrows where the spiders stay and wait to pounce on their prey.

Tubular webs – These webs run along the base of trees and on the ground. They look similar to funnel webs and are used by the spider to hide until their prey triggers a line.

Tangle webs/Cobwebs – These webs lack symmetry and are non-sticky. These messy-looking threads are typically attached to a support system like the corner of a ceiling. The Black Widow and house spiders are tangle web weavers.

How strong is the spider web?

The spider thread is the strongest natural cord, stronger than the same thin steel wire! The web of a Pacific Ocean spider wall is so strong that it is used as a web by natives. Darwin's bark spider produces the biggest known web and has the toughest among spiders. Their webs are ten times tougher than Kevlar – a heat-resistant, strong synthetic fiber – and can range from 900 to 28,000 square cm (140 to 4,340 sq in).

Some spiders have almost endless quantities of spider webs. One group of spiders – Uloborids –, crushes their prey to death by cocooning it in silk which length can exceed 140 meters (460 feet)!

Do all spiders weave webs?

All spiders are predators; however, a lot of spiders don’t rely on webs.

Spitting spiders spit venomous and sticky mass on their victims which only lasts 1/700th of a second. Their spit contains both venoms and liquid silk that immobilizes and envenoms their prey. After successfully making the capture, the spider wraps its prey in the normal spider fashion.

Other spider species are agile hunters; jumping spiders have excellent vision – unlike other spiders – and are very agile jumpers. These spiders are easily recognized by their eye pattern: they have four pairs of eyes with the middle pair being large.

Crab spiders – or flower spiders – are ambush predators. These crab-looking spiders sit on flowers or fruits and wait until an insect comes close to inject them with a strong poisonous smoothie. Some species can even change color to match the flower which they are sitting on!

What’s on their menu?

Some spiders eat birds – like the Goliath Birdeater –; however, their diets consist primarily of larger invertebrates, amphibians, lizards, and smaller rodents. They do not consume their prey “in public” like many spiders; rather, they drag it in their burrows and begin feasting.

Just like some spiders, many arthropods prey on large animals as well. Giant water bugs eat tadpoles and smaller fishes. They are capable of reaching a length of over 12 cm (4.7 in). The quick and reckless Robber flies – also known as Assassin flies – attacks a very wide range of prey: beetles, butterflies, moths, bumblebees, ants, dragonflies, wasps, and grasshoppers. Praying mantes are passive hunters: They peacefully sit on leaves and branches with their greatly enlarged forearms waiting to grip their prey. Their diet mainly consists of grasshoppers, frogs, lizards, fishes, small birds, and sometimes smaller individuals of their own species.

Which insect prey on spiders?

The connection between a predator and prey in the animal kingdom is not always simple; spiders usually prey on insects, but some insects hunt these spiders. A good example of this is the spider-hunting wasps who typically have long, spiny legs. These fearless insects attack spiders twice their size and can fight them for up to an hour. How long would *you* fight for food?

Like many spider wasps, female Tarantula hawk spider wasps also drag their prey to their burrows where they lay an egg on the sleeping tarantula, then close the entrance of the nest, and start looking for another victim. When the larva hatches days later, a massive, fresh food is waiting for him. They first eat the non-essential organs to keep their host alive for as long as possible.

How dragonflies catch their prey?

If ‘Top Gun’ would do a recast with animals, probably most characters and planes would be dragonflies. These charismatic aerial acrobats are capable of all sorts of stunts while swooping on their prey; they can hover, glide, zigzag, fly backward, or change direction in mid-air. Believe it or not, they can outmaneuver most airplanes!

These beauties are predatory insects that feed mainly on mosquitoes, midges, moths, and smaller dragonflies. They are the world's most efficient hunters, catching up to 95% of the prey they chase. This might be due to their deadly accuracy as they can predict their prey’s motion before it happens. They catch their prey in mid-air by forming a basket with their legs, then carry it to a perch.

Their larvae – same as their parents – are vicious predators. These flightless nymphs live in water and they eat any living organisms that are smaller than they are; bloodworms, tadpoles, or smaller fishes.

What is a masked hunter?

This insect belongs to the assassin bug (Reduviidae) family. Masked hunters are predatory insects that feed on earwigs, woodlice, bed bugs, and termites.

They got their names because their larvae carry dust, dirt, and debris to camouflage themselves from predators. They may appear as walking dust piles, but don’t pick them up as their bite is painful that causes numbness and swelling.

Who’s lurking in its hiding place?

In sandy, drylands where the soil is loose, you can easily spot funnel-shaped holes. The predator lurking at the bottom of the funnel is the antlion larva - the larva of a dragonfly-like insect. These predators dig backward in the sand to create funnel-shaped burrows and wait for their prey to come around. Once the bug falls to the bottom, the antlion grabs its prey and injects it with poison and digestive enzymes. Once the liquified organs are sucked out of the prey, the antlion throws the empty bug shell far away.

Not all antlions dig such traps: some antlion species hide under stones and rocks for several years while awaiting their prey.

Receive stories by Daniel Toth in your feed
Daniel Toth
Read next: The Unknown Secrets of Isaac Newton