by Laura Sotillos Elliott 8 months ago in science

The importance of going beyond expert-to-expert communication

Science communication contains three types of knowledge transmission: communication between scientists of the same field, communication between scientists of different fields and communication to non-scientists. Many scientists consider the first one to be pretty much achieved through specialist papers and conferences, but I would argue that there is still room for improvement. For starters, papers are like reading through a fragmented story where you have to decipher the way the researcher got from the beginning to the end. Did they have to slay a dragon or break a spell to find the treasure? Good luck finding that out. But I digress; this is not the topic of this post. Today we are interested in the other two types of scientific communication.

Although many consider specialist-to-specialist communication to be the only important form of science communication, the other two types are key players to advancing and improving science and should not be dismissed. Communication towards the public is of extreme relevance to preserve science and scientific investment and to recruit future scientists. In principle, money goes to where the people that pay taxes want it to go; that’s how it should work in any case. When we are in a period of economic bonanza, this might not be too obvious, but it becomes very clear in the middle of a crisis. Then, when rights and money are eliminated or reduced from many places, only those things for which people fight will keep at least part of what was initially going to be cut. If there is no appropriate communication to the public, the only people fighting for science in this situation will be the scientists, if they can afford to spend a workday outside the lab. This became evident in Spain (my home country) during the demonstrations against the government’s cuts in public services. There were thousands on the street for the public health system and for education, but where was everyone when the demonstration was about science and research? Home.

Science is seen as something only nerds know about and of very little significance to everyday life. For non-scientists, there isn’t necessarily a connection between the new drugs and smartphones in the market and the people creating them behind the scenes. However, cutbacks in science will affect everyone, not only the citizens of the country where the restrictions are being set, but the whole world; remember that science is international. Therefore, it is of the utmost importance that scientists make an effort to bridge the gap between the lab and the streets and make their research available to everyone. As I said in my previous post, Soapbox Science did a great job of bridging the gap between the scientists and the non-scientists. We need more initiatives like this to get everyone involved in science. To make my own contribution, in future posts I will make my best effort to explain what science has taught us about our mind and how we think, starting with, but not limiting myself to mental disorders and mental health.

Expert to non-expert communication in science

However, science communication to non-scientists is not the only problem in science divulgation. Between-fields communication, i.e. having a physicists and a biologist talking about their science, is also complicated. It’s the step in between expert-to-expert and expert-to-layperson communication: we all work in science, but we still speak different languages. Or rather, different dialects: most of the time we can understand each other, but there are some words that knock us completely out of the conversation. This type of communication, though, can be very enriching, as it can accelerate research by solving the problems of one field in another. For example, let’s say that a neuroscientist needs a machine that detects brain waves at the very core of the brain, but there is no such machine available, as they all have a very limited distance that they can read from. If physicists and engineers don’t know about this problem, how fast or likely would it be for them to generate a machine that solves it? Additionally, it is increasingly frequent to find labs made up of scientists from very different fields that work together to solve the same questions. What is the use of a multidisciplinary lab if the people in it cannot understand each other? To advance knowledge and create a meaningful narrative for science, there needs to be communication between all of its branches, and scientists need to know how to “dumb down” their discourse so that non-experts in the field can also participate in the discussion.

The Munich Science Slam as an example of interdisciplinary scientific communication 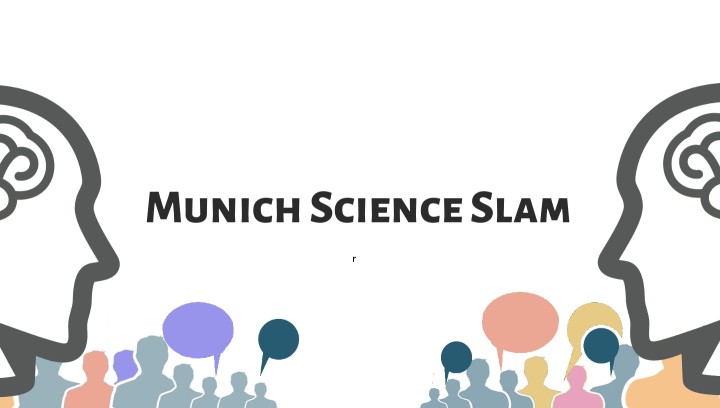 This was very well exemplified by the Munich Science Slam event last week (13th June, 2019). Scientists from all fields were (and will be) invited to come and explain their work to other scientists, and they are obligated to give a good enough talk that everyone can understand in five minutes. Seems like an impossible task, right? Well, it’s not. Everyone was able to communicate their work to the others so that we all understood. How do I know? Before each talk, a member of the public was picked to summarize the talk afterward and everyone did this without a problem. You might be thinking that these people are probably just very talented at public speeches. Not necessarily: there is a workshop a few days before the event where the speakers are taught how to deliver their key point and keep everyone engaged through the talk. They aren’t superheroes, they are just hard workers.

Let’s put me to the test a few days after the event. What did I learn? I learnt about how philosophy and science interact and can be useful to each other by building categories for analysis; I learnt about volcanoes and the why behind the unlikeliness of their eruption; I learnt about the use of principal component analysis (PCA) to find the main characteristics to classify data. But most of all, I learnt that I can understand anything, as long as whoever is on the other side is willing to do their part.

You can find more information about the Munich Science Slam here. They will be glad to answer your questions and help you begin your own Science Slam in your city to keep promoting interdisciplinary science communication.