The Winter That Never Ended

by Jillian Spiridon 6 months ago in fantasy

Welcome to a land of eternal snow. 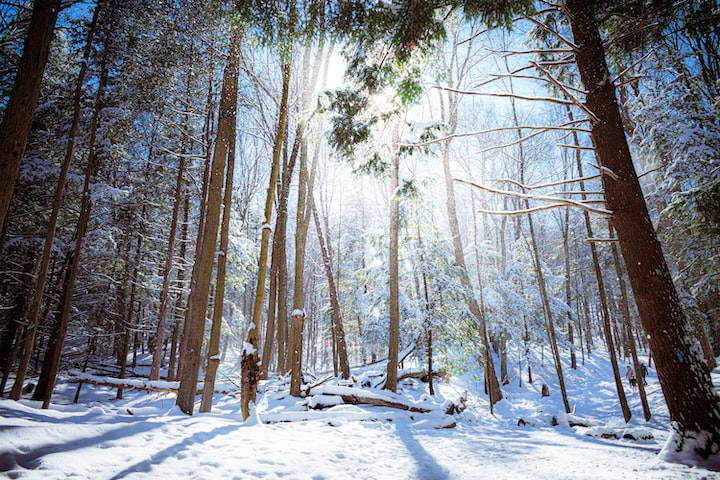 Photo by moe ajram on Unsplash

With every step Kailin took, she could feel the crush of snow beneath her boots. A fog of air puffed out of her mouth with each breath she took. Even the fur cloak she wore did little to keep the chill from trying to creep into her bones. But the sun still filtered through the gaps in the tree branches, laden heavy with the last snowfall.

It had been many moons since Kailin had even seen sprouts of life dot the forest floor. The debris of fallen branches from past storms made walking boldly through the forest the kind of challenge only a Champion from the kingdom might have been able to overcome. Even as lithe as Kailin was, she couldn't imagine traversing the entire forest in a single day.

But the forest was still home in many ways, an imprint from her childhood when she walked side by side with the King's Men, of which her father had once been a part. On such journeys, the men had regaled her with tales of underground courts run by spindly-fingered women whose hair ran as white as fallen snow. But those were just stories, weren't they? None of that could be real.

Or so all of them thought before magic had run rampant and made the passing of seasons obsolete. Spring, summer, autumn—all of them had vanished without a trace, as if some secret war had obliterated them from the face of human understanding.

Now there was only winter, the sovereign, the one who at times had ruled the earth for half a year when the season was especially strong and deadly. No good thing happened in winter. Mothers passed their last breaths, children died of empty bellies, and men had their hearts turn against them in the tumultuous treks through snow and ice. It was not a kind season, and Kailin had known that ever since her father ventured into the Great Forest and never came out again.

Sometimes she went into what was deemed "the winterlands" because she thought she could commune with whatever vestiges of her father's spirit still lingered. But the only sounds were from the trees tinkling with icicles hanging from their branches.

Only when Kailin stood within the Circle of Stones at the center of the forest did she feel a sense of peace to go along with her loss. Her mother had fled to the city, far from the reminders of this forest, but Kailin couldn't bring herself to leave. Not when there was a hope that her father still lived and breathed somewhere beyond her realm of knowledge.

She liked to think he was making merry with the Winterking's court, drinking vats of the would-be ambrosia that was said to be the nectar of the gods. Though she wished she could steal into that realm herself, she knew she was too much flesh and blood and fire to last in such a place. Either she would be doused out, a flame gone too soon, or she would be hardened to ice, her chest hollowed out but for the frozen fragments of her heart.

Kailin drew a satchel of herbs tied together with string and laid it at the base of one of the stones. It was offering and gift alike, the only help she could offer her father if he still did exist in that far-off place beyond the veil. The scents rising from the herbs would be the kind of lure for wayward fairy children who had lost their ways in the woods. They would be invisible to her eyes, as she did not have the Sight that others did, but their trickster selves would delight in the gift laid at the feet of their court.

She bowed her head, her tears nearly turning to ice on her cheeks, but what room was there for sorrow? It was a helpless situation. And she was no warrior to barge through magic and laws older than even her family's crest. She was just a girl who missed her father. She was just a daughter who wanted closure for the greatest loss thus far in her life.

But the only answer Kailin received was a chilly breeze that rose the hairs on the nape of her neck. It could have been a fairy's kiss—or it could have just been the wind playing its usual tricks. Either way, she needed to stop looking for signs in every little happening. That was the way of madness indeed.

When she did look up from her silent admonitions, something snagged at the edge of her vision. At first she thought it was just a stray buck, its antlers casting long shadows in the expanse of white, but a second glance hinted at a far more human form. And eyes, blue as a frozen lake, stared at her through the gaps in the trees.

But another blink made the vision disappear. She brushed her cold fingertips against her eyes and shook her head. It was no matter. Just a trick on her eyes. She had no Sight to enable her to glimpse one of the Winterking's own.

Still, Kailin glanced back more than once as she began to tread back the way she had come—the way back to sanity, to real life, to all the burdens that would come and go with time. There were only so many ways she could circle around this forest in search of her lost father. Whatever his fate, he now belonged to the forest.

And she had to make sure she wasn't another bounty left for the powers that were in the woods. Her mother had already lost a husband; she would probably not survive after losing a daughter as well.

That was how Kailin left the forest, her head held high and watchful, though she had no idea that eyes trailed her form as she went. The only hint would have been the clatter of icicles, their soft noise sounding like a chorus of quiet laughter, mocking in its lilt.

Not having the Sight or even a shred of magic in her bones, Kailin was none the wiser. And maybe she would stay safe because of those lacking qualities. But the forest was always hungry, lying in wait, wistful for the moment when another would wander deeper and deeper into its clutches again...