The Secret of the Supervolcanoes

by René Junge 11 months ago in science

The destructive power of supervolcanoes ist many times greater than that of ordinary volcanoes. They are sleeping monsters, whose existence few people know about. 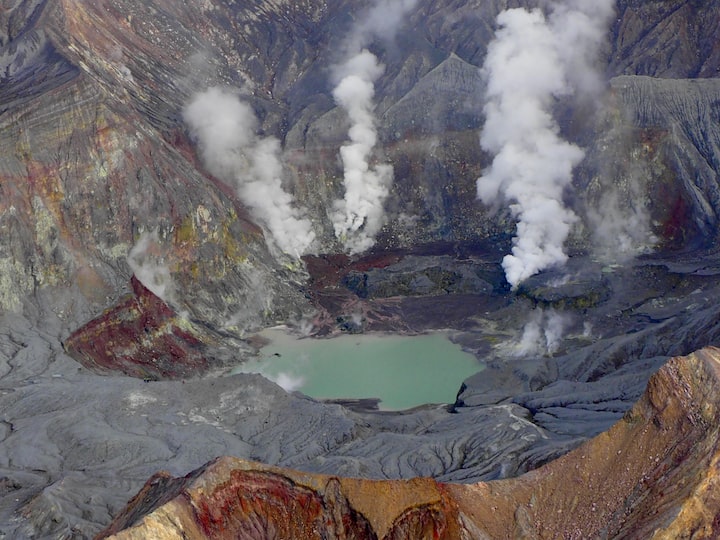 Photo by Farrah Fuerst on Unsplash

The outbreak of a supervolcano regularly has devastating consequences. A typical eruption, like that of Mount St. Helens in 1980, hurls lava and ash into the atmosphere up to a cubic kilometer.

Supervolcanoes, on the other hand, have already reached 5,000 cubic kilometers in the past. Considering that Mount St. Helens claimed 57 lives in 1980 and completely devastated the entire surrounding area of the volcano, one can roughly measure how destructive an event must be that is many thousands of times more powerful.

What are Supervolcanoes and how many are there?

Supervolcanoes are fundamentally different from the volcanoes we all know from school lessons and television. Characteristic is the absence of a visible eruption cone. Ordinary volcanoes are visible from afar and are usually easy to identify as volcanoes, whereas supervolcanoes are generally only visible on aerial photographs from great heights.

That's because of the way supervolcanoes erupt. The magma chambers of supervolcanoes spread underground over vast areas. For example, the Yellowstone volcano measures about 40x60 kilometers. Over the millennia, ever higher pressure builds up in these chambers until one day the soil above them usually ruptures and collapses in a ring shape.

Instead of a volcanic cone, a hollow is formed, which is also called caldera. Therefore, in Yellowstone, one searches in vain for a volcanic crater, as the whole park IS the crater.

Geologists worldwide now know about 20 of these sleeping monsters. For many, the average period between two eruptions is known. Usually, it is several hundred thousand years.

The effects of such super-eruptions can generally be measured globally. In the geological layers of the past millions of years, scientists have been able to detect the deposits of these eruptions, and some of these eruptions coincide quite precisely with major extinction events.

The global climate changes dramatically due to the eruption of a supervolcano because the masses of ash thrown into the stratosphere are distributed over the entire globe by the jet streams (winds circulating at high altitude and high speed) and darken the sun for years.

When 75,000 years ago the Toba volcano, another representative of the supervolcanoes, erupted, this decimated the population of humans at that time to a few thousand survivors. At any rate, this can be inferred from studies of the human gene pool.

Of course, it is difficult to make statements about how these volcanoes will behave in the future, as an average eruption frequency in the past does not necessarily have to say anything about their future behavior.

Moreover, we do not know how such an outbreak would be announced at all. Scientists are now observing increased activity in some supervolcanoes, suggesting that the pressure of the magma chamber is growing enormously. However, whether this is to be seen as a sign of an imminent outbreak cannot be said, because there are no possibilities for comparison from the past.

The Yellowstone National Park in the US state of Wyoming is one of the most impressive national parks in the world. Every year millions of visitors flock there and marvel at the partly bizarre, partly picturesque landscape.

Characteristic of Yellowstone National Park are the many hot springs and geysers that are a visible indication of the volcanic activity in the area. For years, however, it was impossible to explain where the volcano suitable for these activities should be. The whole country there was clearly of volcanic origin, but without having a volcano.

Only on aerial photographs the caldera was discovered by chance and identified as the volcanic crater.

The last major eruption of the Yellowstone volcano with devastating global consequences occurred about 600,000 years ago. On average, such significant eruptions occurred every 600,000-650,000 years over the past two million years. Based on this, statistically speaking a major outbreak would be long overdue again.

A supervolcano in Europe - The Phlegraean Fields in Southern Italy

The last major eruption of a supervolcano in Europe occurred 39,000 years ago in the area where the Gulf of Naples now lies. The golf itself is probably a part of the caldera that formed at that time.

Known as the "Phlegraean Fields," the supervolcano had a destructive force a hundred times stronger at its last major eruption than the Vesuvius eruption that buried the city of Pompeii beneath it.

The city of Naples lies directly on the edge of this sleeping giant and would be hopelessly lost in the event of an eruption. The supervolcano, which stretches over 150 square kilometers, would probably not only destroy Naples in case of emergency but would also cause devastation in half of Europe.

The last eruption caused global temperatures to drop by three degrees Celsius, in Europe by as much as six degrees. Since in today's climate debate we are concerned about the effects of a global temperature rise of one to two degrees over the next hundred years, it is possible to gauge what drastic effects such high and sudden climate fluctuations must have had.

The Phlegraean Fields, like the other supervolcanoes, will eventually erupt again with certainty. The only question is whether this will happen tomorrow or in tens of thousands of years.

Do we have to be afraid of an outbreak?

There are as many opinions in science about this as there are about climate change or other highly complex issues. The truth is, we don't know.

Those who like to deal with probabilities have an excellent field of activity here. Of course, one can calculate how likely an outbreak is in our lifetime by using the outbreaks of the past as a basis for these calculations. However, it is not at all sure whether it is important at all.

Nor do we know what signs should put us on alert. In the past, e.g., in the case of Yellowstone, sudden changes in the geological-tectonic activities have been observed, which then also decayed and did not have any effect. This does not mean, of course, that such observations will not be a sign of an imminent outbreak next time.

The question is also irrelevant for us ordinary citizens. Just as we know that huge meteorites hit the earth at regular intervals and destroy almost all life, we now also know about the additional danger from the supervolcanoes.

However, is that why you or I stop getting up in the morning, living our lives and making plans? Of course, it's not. Interest in such phenomena is a nice thing. However, fear of it is pointless.

More information about supervolcanoes can be found at Wikipedia.

Receive weekly updates, and don’t miss any of my articles.

I confirm that I am the author of the article and that I have the relevant rights to submit this story to Vocal.

Thriller-author from Hamburg, Germany. Sold over 200.000 E-Books. get informed about new articles: http://bit.ly/ReneJunge

See all posts by René Junge →