by Tom C 2 months ago in science fiction
Report Story 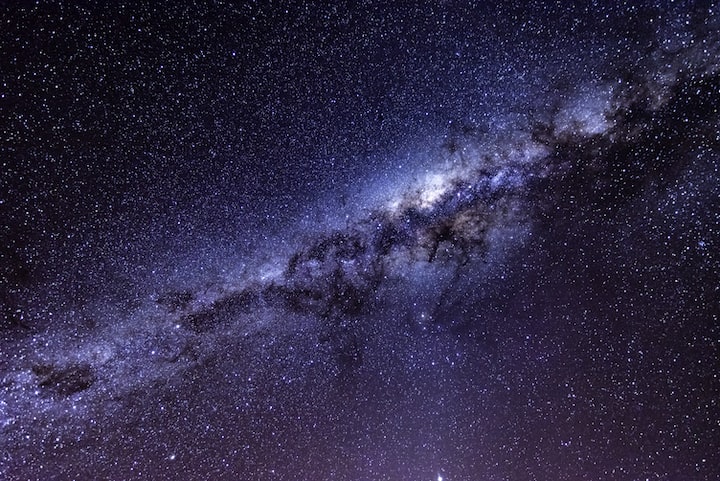 Nobody can hear a scream in the vacuum of space, or so they say. Ketan had always wondered why it had to be a scream, when the same was just as true of a laugh, say, or a sigh. When faced with the unknown, humans always imagined monsters, he reflected. As if space itself wasn’t dangerous enough.

Instinctively, he checked the oxygen and suit integrity readouts on the heads-up display projected inside his helmet. He played out a little more of the tether connecting him to the Nightingale and let himself drift a little further along the ship’s hull, deftly controlling the thrusters with the thumbstick, using short bursts to keep himself level. His shadow slid silently over the smooth, dull grey of the hull plates. The main bulk of the ship stretched away to his left and right. If he looked up or down he could see a sliver of the deeper black of space, marked with the bright pinpricks of a few stars. The view still left him breathless, but he didn’t have time to stop and admire it.

He checked the readouts again. All good, but you could never be too careful. He remembered the words of Tian, his spacewalk instructor: “Make no mistake, space is trying to kill you, all the time. The second you slip up, you’re dead.”

“Don’t get me wrong, it’s not like I give a shit about any of you personally.” She’d had a bracingly honest teaching style, compared with the bland motivational catchphrases the other instructors spouted. “But you’re an asset to humanity, as hard as that is to believe. We’ve put a lot of time and resources into training you. And in return you’ll work to make sure there’s a future for all of us. We almost killed ourselves once. The worlds you’ll be building are our second chance. Don’t screw it up.”

“Ketan. Focus.” There was a soft chime from his comms relay. Lin must have been watching the internal helmet feed and noticed his attention wandering.

"Aye, captain." He wondered whether she checked up on everyone during a spacewalk, or just him. Still, he was grateful that she'd chosen him for the task. As the youngest member of the crew, he was conscious of how much more experience the others had, and determined not to let them down.

"Don't get distracted." Lin's voice sounded in his ear again, like the voice of conscience. "And don't think of it as just routine maintenance. There's no such thing as routine out here. Space is-"

"Trying to kill me, all the time." He couldn't help finishing the line. "Sorry, ma'am. I'm focused," he added hastily. There was a pointed silence. He guessed the captain wasn't used to being interrupted. Then she said frostily: "Good. You're coming up on the array now."

The comms array loomed to his left, first as a strange, spiky pattern of shadows on the hull, then as a chaotic profusion of antennae that put him in mind of the spined undersea creatures he'd seen in old footage of pre-war Earth.

"I see it," he said, realising only afterwards that saying it was redundant, since the captain was seeing it too.

"Perfect. You're doing great, Ketan." came the warmer voice of Vargas over the relay. Although it was reassuring to hear her steady, unflappable tones, knowing that both the captain and the first officer were watching him raised his stress level even higher. He jetted in a little closer to the ship, unclipped another tether from his backpack and pressed the mag-clamp to the hull, feeling it lock solidly.

"The star-shaped one in the centre is the long-range antenna." Vargas spoke again.

"Got it." Anchored more securely in place by the new tether, he drifted a little to the left. The receiver looked OK at first. Then he saw that several of the vanes were pockmarked by small dents near their base. "It's damaged," he said. "Venger was right. Looks like micro-debris impacts."

“Is it repairable?” Lin’s voice cut in again. The damage was minor. There was no question that anyone else on the crew could repair it, but doing it in vacuum added an extra layer of complexity. She was really asking: could he repair it?

Slowly, carefully he played out a little more of the tether, inching closer to the array. He used the thrusters to bring himself closer to the ship and braced one foot against the hull, balancing the force of the jets to keep himself steady. He took the welding torch from his toolkit and began repairing the vanes, squeezing out a small blob of solder to fill each dent from the tube mounted to the side of the torch. It would've been a trivial job in normal gravity, but the weightlessness and the shape of the array made it more difficult. He had to reach awkwardly around the outer vanes to get to the long-range antenna. His grip slipped, and he almost knocked one of the vanes out of place. He hissed in frustration under his breath.

He stopped for a moment, feeling again the impatience that had dogged him during training, knowing he needed to centre himself or it would only get harder. He breathed deeply, rhythmically, as he'd been taught, and went back to work. At some point the stress fell away - the self-consciousness of being watched, the awareness of the vast emptiness of space stretching away to infinity all around him - everything fell away, and he was just absorbed in the work, his movements sure, his mind clear. In the back of his mind some part of him watched and marveled at the ease of it all. He let his thoughts stay light and free, knowing instinctively that if he tried to focus too hard he would lose this effortless grace. In what felt like no time at all the task was finished.

Back aboard the ship, after passing through the airlock and clambering out of his suit, he jogged hastily through the spartan corridors to join the rest of the crew at the table in the mess hall. Vargas looked up and smiled warmly as he sat down; Lin gave him a curt nod. He sat next to Venger, who looked lost in thought, no doubt working on some fiendishly difficult mathematical problem. As the ship's engineer, the older man was in a unique position: he carried the neural implants that augmented his consciousness and allowed him to interface directly with the Nightingale's systems. He often came across as cold and prickly, though he was also capable of surprising insight. Opposite Ketan, Xandra smiled too, an infectious grin, white teeth bright against her dark skin. She was the second youngest, after him. He smiled back, a little self-consciously.

There was already a plate laid out for him with a block of a dark green jelly-like substance. Like everything on the ship, their food was designed with function rather than comfort in mind, prioritising nutritional value alongside low use of space and energy. The rubbery, nutrient-rich cultured algae had a swampy, brackish taste that the few plants they grew for taste - tomatoes and chillies - couldn’t quite disguise. Against the far wall a holographic projection of their destination spun gently above a console, marked with the planned sites of the terraforming machines.

As they ate, they talked shop. “So the array’s fixed?” Xandra asked.

“Yep, thanks to Ketan.” Vargas replied. “Assuming we clear pre-flight checks, we can translate tomorrow. Kepler-62f here we come.”

“We will clear the checks.” Venger broke in abruptly, in his customary monotone. “The ship is functioning well within normal parameters.” Then his eyes glazed over again as he returned to whatever arcane problem he was grappling with.

“I can’t wait to see it,” Xandra said with a touch of wonder, her eyes lighting up as they always did when she was excited. “A whole world, untouched by humanity. We’ll be the first to set foot on her.” In stark contrast to humanity’s birthplace, was the unspoken implication. The Earth had already been dying long before nuclear war over its few remaining resources left it a blasted, ash-swept shell, barren of life, seething with poisonous radiation. It was only thanks to the orbital habitats that humans had survived at all. Even now, almost a century later, every child still learnt humanity’s' history of greed, selfishness and apocalyptic horror, along with the message: be better.

“Captain? One thing I’ve been wondering. Why is she called the Nightingale?” Ketan had wanted to ask for a while, and now seemed as good a time as any. “I know it was a bird, but what was so special about it?” He’d researched the nightingale after being assigned to the ship, but found only patchy academic records of its plumage, diet and mating habits that meant little to him.

“Vargas suggested the name.” Lin inclined her head towards the first officer, giving her the floor.

“It was a bird, like you said. The last recorded sighting was in 2042. It sang at night. It was supposed to have the most beautiful song. People wrote poems and songs about it. I thought it was appropriate for what we’re doing. Making something beautiful, out there in the dark.”

“Thou wast not born for death, immortal bird!” intoned Venger. “No hungry generations tread thee down. The voice I hear this passing night was heard in ancient days by emperor and clown.” They all looked at him. “Keats,” he said, as if it was obvious. “1820.”

Ketan looked at the hologram again. Kepler-62f was waiting for them, he thought. A second chance for humanity. The thought filled him with pride and determination. We won’t screw it up this time, he told himself.