'With the whole world crumbling, we pick this time to fall in love.' Ilsa in Casablanca 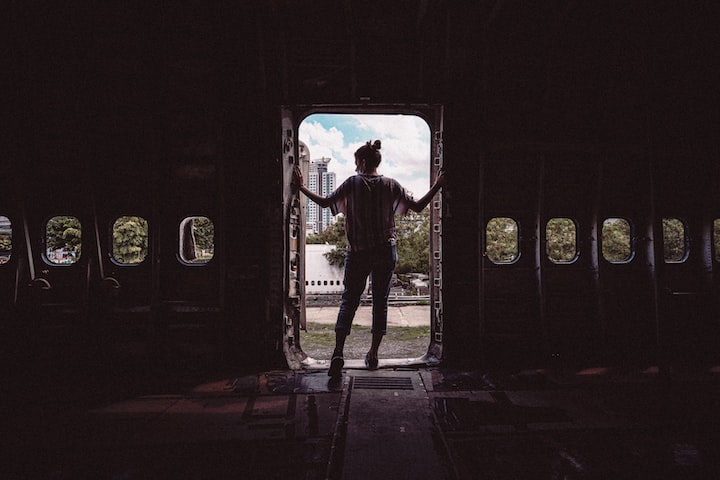 Photo by Artur Kornakov on Unsplash

Her hand went to the tarnished locket that rested against her skin. The gold plating long worn off-it wasn’t worth the chain that it rested on, but it was her treasure. With shaking fingers she carefully pried it open, unfolding the small piece of paper with his address on it. It was a match.

Last week the LED Matrix sign at the gates of the Epsilon had shown that it was the seventh month of the year 2037. There was no way he still lived here after ten years, was there?

The tall form of a man approached from the wood. She knew him by his athletic frame, his sandy blond hair. Knew that when he reached her on his overgrown back porch, he’d have hazel eyes.

She was twenty-nine, so that made him thirty-four. He was even more handsome if it were possible. He had the tan skin of hard work and wanted for a haircut, but he looked good.

"Who are you?" Laigh said without ceremony.

She wasn't surprised by his greeting. The last time she’d seen another human was four days ago, and before that-

He drew a very sharp blade from somewhere hidden. Numbers left her. She backed up a few steps.

Recognition eased ever so slowly into his eyes. He carefully re-sheathed the knife.

"That paper you wrote your address on, in calculus. It was still in my locket when the war started…” She didn’t need to add that they had left the city with the clothes on their back just as everyone else had.

"Are you an escapee of the Epsilon?" he asked suspiciously.

"How did you manage that?" He scanned the tree line and unlocked the cellar hatch quickly.

"I ran with the Scavengers, until they became violent..."

"Hurry then." he said indicating the opening.

He placed food before her. Her stomach ached and her mouth watered painfully. It had been two days. "I'm glad you're okay," he said seating himself.

"I'm surviving," she said. "You however are doing well." She was happy for him.

Flashbacks flickered through her mind’s eye with a painful brilliance now that she was once again with Laigh. With Laigh? The basketball star? She wished. She always had.

He looked to his food, but she’d seen the flash of pity in his eyes.

He’d only known her the last few months before The Ruin, but he remembered that he'd found her beautiful, interesting. Then she'd slept with a friend of his and they’d never spoken again. It was nice to remember another time, he supposed. Problems that belonged to it, luxuries no longer afforded.

"How is it a lone woman has navigated the wreckage and managed not to become property of the Epsilon?"

"I know my topology?"

"How did you get away from the scavengers unscathed?"

Her truths were manifold and that drew him in as a slowly winding lure. Her cheeks began to bloom. He realized he was staring.

"Unscathed as in hurt." He said firmly and decided he was finished eating. He didn't like to beat around the bush.

"I'm, sorry I stopped by unannounced,"

"It's okay," he said clearing their dishes. "You don't have to talk about it.” He wasn't interested in a conversation that circled like a torus.

She was beautiful and he was lonely (as any that dared the rough life of the survivalist outside the walls of the Epsilon were-better lonely than a prisoner) but it was his upbringing that called to duty his interest in her wellbeing. His had been a family of self-sufficient survivalists who believed in chivalry and family tradition was his way of not being so alone.

"Abandoned building. It works." She smiled.

"Yeah." He said with his best convincing smile.

Trouble found them forty-five minutes into their journey. There were four of them. Scavengers. Bespoke by their shredded worn clothing which was offset by the bright red ‘S’ they painted in OE on their arm bands. It was a bit comical, but their knives and intent were not. One of them was looking at Andy like he wanted to violate her real good. Well, that was not going to fucking happen.

Laigh closed the distance for the approaching man with one wide step and planted his fist in the guy’s face so hard he cut it on his teeth, hit him until he was out and moved on to the next. Another backed away in amazement and ran.

Laigh had the last Scavenger against a tree with his knife. The same one that had given Andy the look he hadn’t liked.

“What valor,” he said choking on a laugh as Laigh reminded him with pressure to his windpipe who was in control.

“I’m going to tie you to this tree, and you’re never going to come around this section of The Ruin again. Because next time I won’t let you live. Got it?”

Dillan smiled at Andy as Laigh secured him to the tree, “Have you been dreaming of our kisses sweet Andy?”

Laigh’s brows furrowed in confusion but he didn’t falter at his task. He gave the ropes a firm tug.

“Waiting for an ovation?” Laigh asked, a bored look masking his increasingly seething anger. Then he punched him in the temple, knocking him out instantly.

“Let’s go.” He said avoiding eye contact with her. “Before more come.”

“The Scavengers captured me at the insurrection. Dillan claimed me. I escaped.”

“How long were you captive?”

“Almost a year he kept you hostage.” The inflection in his voice was all knowing. "How did you escape?"

"I ran when they were forced to vacate the camp by Vicker's Mill. I didn’t think they’d still be in this area or I’d never have come back. I didn’t thing anyone was still here…"

Andy stood against the open door of her veranda cradling a jar of the wine he'd brought. Under the setting sun and from this high up, the magnitude of The Ruin was breathtaking.

He revered it silently, and her.

“This is the first time you’ve been back to New York?”

“I was just passing through when I recognized your address from the paper.”

“You must be tired. Not a sustainable way to live, Andy.”

As in their youth, he drawn by her wildness yet disrupted by the instability of it. She was everything fire, fight and defiance and he longed to take refuge in her, even as he bid her good night.

Barely a few weeks went by and he’d made a habit of checking on her regularly. Bringing her things, inquiring on her health. It occurred to him one long night alone after having taken care of a cut she’d sustained trying to open a can with a knife, that he couldn’t rest knowing she was out there alone. There was only one solution.

The voyage to Laigh’s was surreal. She studied his physique as she followed behind, everything she owned in the pack on his shoulder.

“It’s not paradise, but you’ll be safer than you were and you won’t be going hungry anymore.” Laigh had added the last part softly.

He’d asked her to move in with him.

Andy felt tension dissipate as the locks and bolts to the cellar door slid home. The danger of the city’s wilds and all that entailed was behind them.

They barely picked at their dinners, instead drinking most of a twelve pack. Laigh glanced at her sideways. For a moment she saw the basketball star, winking at her through the crowd at the party… ‘Later,’ it seemed to say.

She was different and yet, she was still Andy on fire. He began to lean in, stopped. A faint scar peeking out over her shoulder sobered him. She needed healing, not fucking.

“We should call it a night.” He said with finality. He couldn’t help chastise himself as well for going after a girl who’d cheated on him once. It wasn’t a possessive thing, but a moral one. It didn’t speak well for her, though she seemed like a good person. It was what it was, and yet something about it didn’t fit. He knew his mind wouldn’t rest until it did.

“Give it enough to dampen the earth, but don't hit the leaves."

Andy held the water pouch so it didn't impale the sprouts. She learned quickly, worked hard. It occurred to him that they really only knew a sliver of each other.

"Put your fingers here." He said one hand over hers, the other on her waist steadying her as he taught her to hold the bow. Her t-shirt slipped and he noticed the scar again. It bothered him, not knowing how it had gotten there.

"How'd you get that scar?" Laigh asked, his hand still on her waist.

Andy was only confused for a moment before she realized what he was referring to. He was a very painfully blunt man sometimes.

She didn't want to tell him really, and yet the answer came out all the same.

"I wasn't successful the first time I ran away. It was a warning." Her laugh faltered, "I guess I don't listen."

"Dillan?" He asked, anger welling immediately within. He hoped they crossed paths again.

"What avarice.” He said, doing his best to cover up his reaction.

Later that night he did again.

"Why don't you like it when the sun goes down?"

She was growing accustomed to his frank and intimate questions.

“I pay attention.” I’m trying to get to know you.

"Well I’m not afraid anymore, so it doesn’t matter." Because I’m with you.

She paid attention too, and there was more to Laigh than what he allowed to breach the surface. She saw the wheels turning in his dark gaze when he took in her answers.

That’s okay, he thought uncorking a bottle of his precious reserve. He had a hunch.

"Dillan's a little bastard." He said and handed her a glass of wine. She laughed, shocking him.

To make matters worse she couldn't stop. The way he’d worded it struck her as funny somehow.

"I'm quite serious." He said, handing her a glass of wine. “He’d deserve the reaction of someone to being picked on, by someone his size.”

Her laughter trailed off. She was confused.

Did he really care?

"Why did you mess around with Josh, when you were seeing me?"

She hadn't expected him to bring that up, and the way he’d said it, she knew, it had been bothering him.

He looked as if his own question made him uncomfortable.

“I didn’t mess around with Josh.”

His gaze shot to hers.

“The night you were supposed to meet me, he came instead. He said you were with a girl. I was upset, he comforted me. Then he tried to make a move and I left. I didn’t want him…”

“That bastard! I had a family emergency. He was supposed to tell you. He said you slept with him. We weren’t friends anymore.”

Silence prevailed for a hot minute. His gaze was heavy.

They had opened Pandora’s box and he did not want to close it. He opened his mouth to speak but she put her fingertips to his lips. It was the first intimate contact they’d had thus far in their reunion. It was a torch to a dry forest.

She let them slide down to rest on his chest.

He took her in a kiss.

They were skin, hands, taste; seeking and finding within each other, something that even The Ruin couldn’t tarnish.