The Ocean Is Important. How Important?

by Kader Folles 2 years ago in science

Here's how we rely on the ocean, how we're affecting it, and ways we can help.

Without the ocean, we simply wouldn't survive! We ALL rely on it, even those who live miles away from the shore.

The ocean covers nearly three-quarters of the earth's surface and holds 97% of the planet's water. Believe it or not, the ocean also generates more than half of the oxygen in the earth's atmosphere. Don't believe me? Let me explain. Phytoplankton are plants that live near the water’s surface and drift with the currents. These plants produce oxygen as a byproduct of photosynthesis, a process which converts carbon dioxide and sunlight into sugars the organism can use for energy. Put simply, they produce oxygen the same way that trees do. But on a much larger scale. Scientists believe that phytoplankton contribute to between 50 to 85 percent of the oxygen in Earth’s atmosphere. That's a lot.

Oxygen levels in worldwide oceans have dipped by more than 2% in the last half-century, caused by the amount of pollution that is now in the earth's atmosphere as well as pollution washed down by rivers, such as chemical fertilizer. While the change may seem small, scientists say even subtle shifts in gas levels can alter entire ecosystems. This drop is creating "Dead zones" where areas are so low in oxygen that they can no longer support life. In areas with lower oxygen levels, that could still support life, fish are found to have much smaller reproductive organs and lower egg counts, leading to massive decrease in numbers. This is a huge problem for the future of the ocean and the future of us.

This map shows known 'Dead zones' around the world. 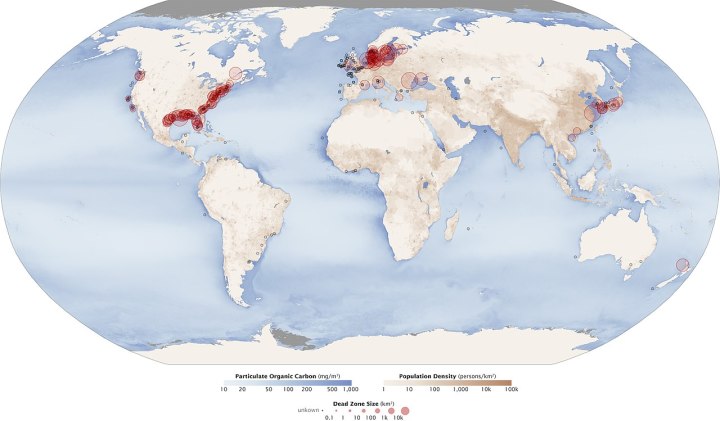 There is an estimated 5.25 trillion pieces of rubbish in the ocean. The rubbish just floating on the surface weighs in at around 269,000 tons, and it doesn't stop there. Eight million tons of rubbish are dumped directly into the ocean every year! That's not counting rubbish that gets washed into the ocean indirectly. The evidence can be seen scattered across the world's beaches and harbors.

This plastic pollution causes a number of problems for the ocean. There are so many cases of unnecessary deaths to marine life. Especially marine mammals, who get tangled up and can’t get to the surface for air. Abandoned fishing nets continue to "ghost fish," ensnaring and killing as they float with ocean currents. Plastic bags continue to be found in the stomachs of dead sea turtles, who mistake them for food. Sea birds are dying after mistaking floating plastic for fish, eating it and feeding it to their young. Even whales, the largest creatures on earth, are being affected!

Floating plastic in the ocean is washed up and litters our beaches. 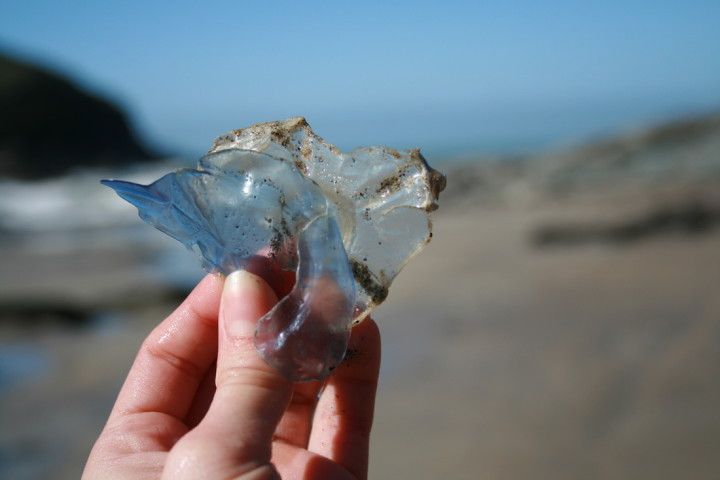 However, large pieces of plastic are not the only problem. Plastic never truly rots away, it simply breaks down into smaller and smaller pieces. These pieces can then be consumed by animals at the very bottom of the food chain, like plankton and shrimp. These micro plastic particles leach toxins into their bodies. When these tiny creatures are then eaten, the toxins given off by the plastic multiply. When that fish is eaten by an even bigger fish, the toxins multiply again and so on. In large fish, the toxins can reach dangerous levels, effectively poisoning the fish and anything that consumes it, including us!

Plastic collects on ocean currents, and creates vast patches of floating rubbish called gyres. The largest of which is called the Great Pacific garbage patch, and is over twice the size of Texas!

Map Showing Gyres in the Pacific 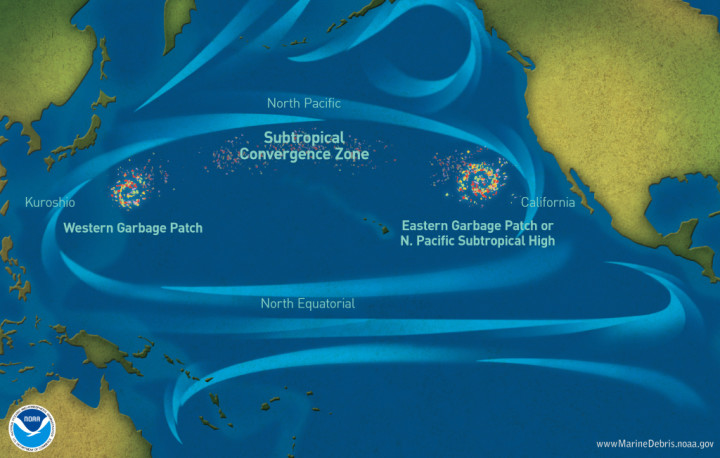 So what can we do about it?

Plastic has become a huge part of our every day lives. We eat out of plastic containers, we carry things in plastic bags, we drive around in plastic cars, we even wear plastic! So it's pretty unrealistic to cut out plastic from our lives completely. But what we can do is cut down, particularly on single use plastics!

Single use plastics are plastic products that are only used once and then thrown away. The most common being plastic bags and drinking bottles. These are most likely to end up damaging the ocean, and the easiest to give up. Do you really need another plastic bag or bottle? Probably not.

Cut Down Single Use Plastic

Think about the products you are buying. A lot of products have an unnecessary amount of packaging and often there are alternative options available. For example, fresh fruit and veg can be bought loose rather than packaged. Water bottles can be refilled instead of thrown away. Using tote bags or "bags for life" are good ways of reducing the use of single use plastics.

Did you know there are some shower gels and face scrubs that contain plastic? Micro-beads are used to help exfoliate your skin, but they can get past filtration systems and wash straight into the sea. Read the packaging before you buy products like these. Some are made from biodegradable material such as wax and are fine to use, but if the ingredients say Polyethylene, best avoid it!

Be careful when buying glittery bath bombs, soaps, and even makeup. A lot of companies still use plastic glitter in their products because it's cheaper and much more readily available. Much like the micro-beads, this glitter can be washed down the drain and straight into the sea.

This is rather self explanatory. Turn off electrical products and lights when they're not needed. I know, we hear it all the time...

The use of clean energy sources such as solar panels will reduce your carbon footprint as well as save you money. Win-win!

Nobody's perfect. We've all left that one bit of rubbish behind on the beach, or let something blow off in the wind. Sometimes it's just a matter of stopping and thinking. Have I left anything behind? A bucket and spade? A sweet wrapper? It's not just at the beach either, wherever you are. Rubbish can be blown about, find its way down a drain and make its way out to sea. It's surprising how far your rubbish can go.

The ocean is a beautiful, magical wonder. It brings life to us and to every creature on the planet. let's look after it, so that we can continue to thrive and so future generations can enjoy its beauty. 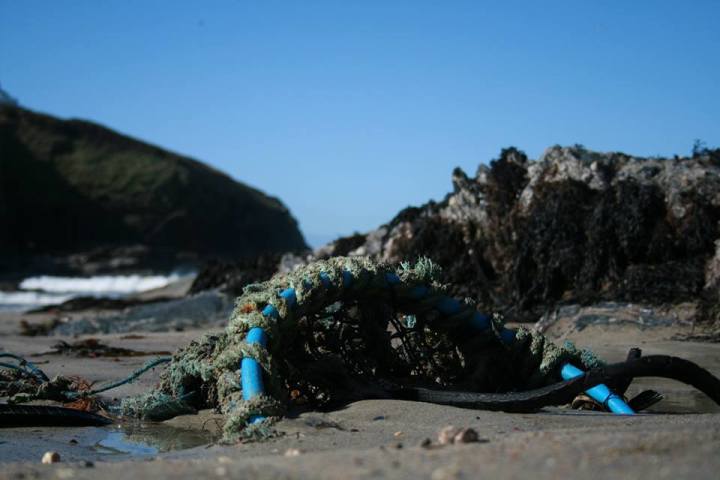 Two years ago, I swapped my normal, boring everyday life for something extraordinary. Four wheels and true freedom. Destination: Adventure!

See all posts by Kader Folles →