Unity under the All-Seeing Eye 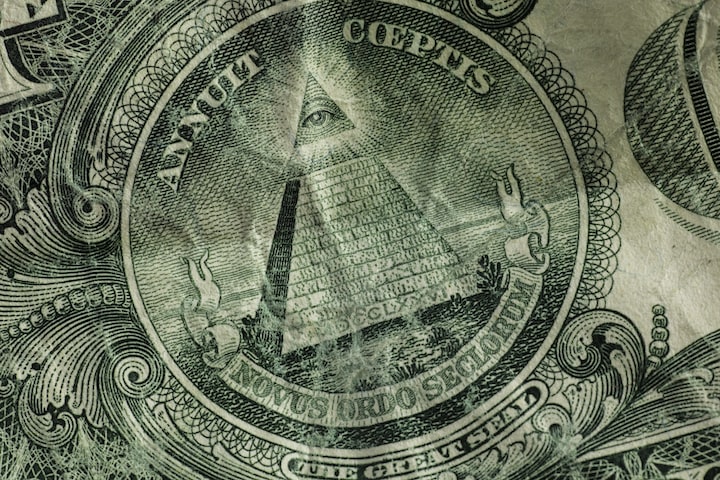 The time was five-thirty in the morning in Salamanca, Spain. The dark conference room was barely illuminated by the bright LED numbers flashed from March 21st, 2085, to telling the time. Maria de Santo Domingo sat in almost complete silence, albeit for the agitated rhythm of her fingers moving up and down in a wave on the wooden table. Maria was a woman of action that barely seemed to take time to breathe, let alone sit still by herself. Unfortunately, humanity had yet to learn how to control time, so she would have to endure waiting until it was noon.

A wicked little smile curled the corners of her pouty, red-stained lips. Her family and those that had served their cause had waited six-hundred years for this moment. A few measly hours was nothing compared to that wait. Her honey-brown eyes looked at the window over the city. A mix of historical and modern buildings made up the center of the town. It wasn't a large city by any means, which made the upcoming event even more delightful for Maria. Salamanca was such an unassuming town a lot of people had never even heard of it. To think the conquering of the world will have started from such a humble beginning.

How humbling perhaps only Maria, her mother, and all the great grandmothers dated back to 1485 knew. The first Maria de Santo Domingo was nothing more than the daughter of a humble laborer. Soon she would be known as La Beata de Piedrahita, the original Alumbrado who directly linked with God. She was a prophet and a mystic, and thanks to her, Maria was where she was today. All the precise and careful planning that had gone into making this day possible was beyond any one person's capability to recite. That was why journal after journal organized concisely in bookshelves lined the walls of the conference room. Those volumes were priceless. For every generation, after La Beata de Piedrahita, a girl born into the family was named Maria de Santo Domingo and was tasked with the care of these journals. Until the day their many time's great grandmothers had predicted that the ancient world would begin. In its place would be a new world order... their order.

The world had changed so much since then. The group known as the Alumbrados was eventually renamed. Its foundation restructured into what the world would come to know as the Illuminati. That word alone conjured up crazy conspiracy theories for most people that heard it, and with good reason. They did not want their secret to be discovered. One time their order had been threatened by internal dissension, which ultimately led to disbanding the order. That was the last time the world had heard from the real Illuminati. If it wasn't for her family, there would have been a good chance that they would have only been heard of in history books. Instead, they had been the ones to allow whispers of the secret order to be circulated. Granted, they hadn't explicitly began the crazy theories that had been circulating for years now. Still, they had absolutely used them to their benefit. The imagination was good at thinking of things that were far worse than the truth. However, in this case, the truth could prove those imaginative minds wrong.

Maria got up and stretched with a pleased hum. "Siri, low lights please, warm color," she ordered as she moved to one side of the room where the oldest journals were kept. Thick glass protected the hundreds of years old tomes from deteriorating further than they had. She walked down the shelves and soaked in the knowledge that she belonged to something so grand. It humbled her to think that all the Marias' there had been, she was the lucky one to see all of their work come to fruition. Her slender hand ran across the bindings of the more recent journals when she made her way to the other side of the room. All of the work that was described in these annuals was now coming to the crescendo. Randomly she picked out one of the journals and opened it somewhere in the middle to start reading.

9:00 a.m.: Today is an important day. If these plans fail, then the entire society could fail. I will not have that disgrace on my head if there is anything I can do about it. The ITs have told me to meet them in their office at noon for the launch of Bitcoin. I hate that name. I would have made them change it, but they'd already registered the domain name last year. It lacks in the grandeur for what it will provide for us in the future. I hate it even more than I had that ridiculous rumor that we're using clones to take over celebrities. Precisely what do they imagine we would ever need a clone of Al Roker for? Anyway, I better head down to the IT lab. If Bitcoin changes the idea of currency, I can die knowing I was the one who made it possible. If this works then, the Illuminati will become the only order to have any monetary worth.

12:30 p.m.: That was a bit anti-climatic. I suppose that I should have known it would be. I'm not a tech guru, but the team got really excited once Bitcoin was up and running. Here is how Bitcoin is going to make us the wealthiest society in the entire world. If all goes according to plan, Bitcoin will become popular, and people will begin to invest in it. Our network will make sure that Bitcoin will never fall entirely. We will also mine our own now and save it when the new world order comes for the time. By then, one Bitcoin should be worth thousands and thousands of dollars. To do that, we had to make a person that the Bitcoin's could go to. That person will be known as Satoshi Nakamoto. Tonight I will toast to this imaginary person and pray that our plan succeeds.

After sitting down again, Maria read down the timeline of all the events in that year and after. It was almost a century after this journal, and while things had changed, they weren't that different.

1:45 p.m.: After two long years of waiting to see if our project will take off, we have absolute assurance. Bitcoin has taken off beyond our wildest dreams. Satoshi Nakamoto isn't needed anymore. He has mined a little over one million in Bitcoin. The Society will hold onto that until such a time that we will use it. There is a weight off of my shoulders knowing that I have been successful in this one thing at least. Our work is never done, though.

A knock on the door interrupted her reading, "Come in."

"Ma'am, it's almost seven o'clock. I'm rounding up everyone in conference room C. They should be ready when you are," a young man informed her as he stuck his head in.

"Thank you, Miguel. I'll be along shortly," Maria assured him as she closed the book and stood up to place it back in its proper spot. She took one last look around the room. A feeling of pride began to fill in her chest. Then, she walked out of the conference room. It was time to make history. It was time to let the world know who the Illuminati were and exactly how powerful they really were. Today was the day the New World Order would take its control and unify the world.

I am a trans-man. Whatever I make here will go towards paying for things I need to transition. My goal is to look like the doctored photo of myself on my profile. I'm excited to get writing and to read y'alls amazing stories too.

More stories from Jack Oliver Plumer and writers in Futurism and other communities.