by Danielle Allen about a year ago in comedy
Report Story

and the Ramirez Family 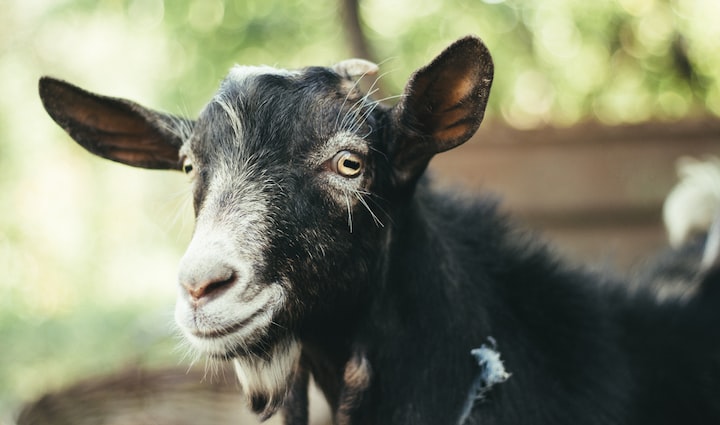 Photo by Anton Darius on Unsplash

“¿Esta muerto?” Abuelita poked the goat’s thigh with the tennis-ball end of her cane.

“Its neck looks weird,” Ana asked her dad. Humberto looked closer at the goat. Ana wasn’t wrong. The goat’s neck did look “weird.” It made an “S-curve” from its shoulders to its jaw.

A moment ago, the family watched as a blue lightning bolt shot out of a black storm cloud hitting the rusty windmill next to the old barn. The barn was fine. The windmill was okay. The problem was Kevin, the goat.

“Es weird. El cuello es raro, Mamá.” Humberto said, looking up to the roof of the barn. “How’d he even get up there?” The roof of the barn was about 30 feet up in the air. The north half of the roof was in shambles. They watched the lightning’s shockwave blast Kevin off the roof, landing 30 feet below in the wildflower patch.

The family jumped backward. Kevin bleated and scurried headfirst into the broad side of the barn door.

“¡Puta madre!” Abuelita clutched her chest. In the distance, Kevin’s head popped up out of the tall wildflowers and walked back into the barn.

“¡Mamá!” Humberto gestured to his kids as Rafael ran after the goat.

This was the fourth incident involving Kevin since the Ramirez family moved in last month. Humberto’s brother, Tito, mentioned the old barn, the pond’s algae problem, and the squabble between the neighbor to the south’s fence on the fifty-acre property. He had not mentioned Kevin. No one knew for sure who was the original owner of the family property, but animals hadn’t been on the farm since the early 80s.

Rafael found and named Kevin. The eight-year-old crashed his R.C. truck into a rusted hay rake when he was supposed to be helping Abuelita unpack her moving boxes. With his truck's wheel wedged in between the forks, Rafael climbed on top, gripping both sides of his toy, pulling with all fifty-four pounds of his frame. The wheel slid upward until it snapped out like a rubber band, throwing Rafael into a pile of sandbags. The top sandbag rolled down the backside of the pile, crashing into a wooden barrel. Two hoofs clunked out of the barrel, revealing a black and white goat with a fiber rope around its neck and a metal engraved plaque with the letters, “K.V.N”

Rafael screamed. Kevin blinked. It was only a goat. Rafael left his R.C. truck and controller in the barn and led Kevin by the rope to meet the family.

Humberto and Ana were balancing the stainless steel fridge on a dolly as Rafael waited quietly in the kitchen.

“You have to turn it, Ana,” Humberto said.

“I am turning it, dad. You’re not guiding me.” Ana shot back.

“We have to pivot more, or else it’s not going to fit through this archway.”

“Well, which way are we pivoting? You keep saying turn and pivot, but you’re not telling me which direction I should pivot.” Ana paused against the fridge. Humberto sighed and did the same. He realized that he bickered with his daughter as he did with his late wife. Ana turned sixteen this summer, and every year she looked more like her mom.

Rafael pointed to the goat with one hand, holding onto the rope with the other. “Ke-vin.” Humberto and Ana’s heads turned in the direction of the unfamiliar voice. Rafael gave a toothless smile.

“Did he just speak?” Ana asked.

Rafael pointed a second time at the goat. “Kevin.” Kevin stared in two directions. Humberto bent down in front of Rafael, putting his hands on his son’s shoulders, ignoring the goat in the room.

“Kevin!” Rafael pointed down to the engraved letters, K.V.N. on the goat’s plaque. Humberto’s eyes swelled with tears as he hugged his son.

“Of course we can call him Kevin. That was amazing!”

Abuelita tottered into the kitchen from upstairs. “¿De donde vino el cabro?” Abuelita asked walking by the goat into the pantry for canchitas. Ana and Humberto’s heads turned.

“Rafael, where did this goat come from?” Humberto asked, taking the rope from his son. Rafael climbed onto the counter of the kitchen window and pointed to the old barn.

Humberto examined the broken barrel. The charred branding on the side of the barrel read, Kelvin Farms est. 1929. He called his brother Tito. Was this a prank? Tito said no one had been on the property since 1983. Even if this was some sick joke from a month ago, without food, water, or air, Kevin should be dead, but that was Kevin’s theme.

His theme was on full display during his second incident with the family. Humberto was driving back from Ana’s rodeo competition, coming up over the last hill before they reached the driveway. Kevin was standing in the middle of the road. Before Humberto could brake, his pickup truck slammed into the goat’s ribcage launching Kevin over the windshield. Then, there was the time he fell off the dock into the pond. He sank like a rock. Humberto fished him out thirty minutes later. Rafael’s comforter still smelled like algae. Humberto didn’t drive Kevin over to the next town like he wanted to because Rafael defied his doctors and said his first words thanks to the miracle goat.

A second and third bolt of lightning struck the windmill.

Thunder crackled through the storm clouds. Humberto and Ana dropped to the ground. Abuelita didn’t budge. Her glasses and hearing aids weren’t unpacked yet. The old barn glowed in an orange-magenta light from the inside. Metallic clangs echoed from inside the barn door.

“Rafael?!” Remembering his son chased after the goat.

Kevin sprinted out of the barn. Rafael dragging behind clutching Kevin’s rope with both hands. Three blue laser blasts shot out from the barn. One of the lasers skimming the top of Kevin’s horns.

Eight soldiers in metal suits stomped out of the smokey barn. Two dropped to their knees and fired several more laser blasts at Kevin.

One of the metal suits held up her fist. The firing squad stopped. The suit twisted off its helmet revealing a short, muscular, red-headed woman with freckles. She took out a credit card-sized device from her hip pocket and waved it over Rafael. Abuelita took off her clancha slapping the device out of the woman’s hand. The other suits reached for their weapons, as the woman held up her hands.

“Wait!” The device beeped as the woman picked it up off the ground showing the other suits.

“Who are you?” Humberto asked.

The woman ignored Humberto and gathered her team whispering in a huddle. None of the others took off their helmets. Humberto noticed a black band with a bold letter “C” around her left bicep. “These aren’t NPCs. That boy is real!” The whispers of the woman’s voice carried through the air. The woman pointed to a suit with a green helmet. “Double check this timeline and make sure this wasn’t a screwup on our end. It’ll be my head.”

“Did you just say timeline? Dad, she just said check the timeline! Are you guys from the future?” Ana squealed revealing her Fortnite t-shirt. “And we’re not NPCs. Are you from a video game? Are we in a video game? What even is going on?” Ana laughed hysterically. Abuelita grasped her flipflop ready to smack one of the suits into la próxima semana. Rafael sat next to Kevin scratching in between his ears. Humberto’s hands were over his face.

“Can someone please explain who you people are, and why that guy tried to shoot my goat?” Humberto mumbled. The captain handed Humberto dark sunglasses. The other suits handed the rest of the family corresponding glasses.

“Put these on.” She touched a few keys on her device. A voice projected out from the sunglasses.

Abuelita interrupted, “¡Ay, Ay, no entiendo nada!” She slapped the suit next to her on the forearm. He took the glasses back, scrolled over to language settings, selected Spanish, and handed them back to Abuelita. “Gracías”

Humberto took off his glasses. “So, this goat is a bio-hologram?” The woman nodded. “And you guys are from the future?” She nodded again. “And you’ve cloned us into the Matrix?”

The woman shook her head. “No. KVN is a video game software company that created bio-holograms for gaming. Pretend you want to play laser tag, but you’re a lonely super-genius with no friends. Instead of imaginary friends, you invent a walking, talking, breathing hologram to play with you. As gamers grow up, we want bigger, better, realistic games, so KVN started buying abandoned properties and creating time looped maps for their users. The loops function like self-contained playgrounds for gamers.”

“What game are you playing now? Capture the flag?" Ana asked.

“Token Hunt. The goat is an NFT, part of a rare collection.” The captain replied. “However, this loop was coded incorrectly. The dates should be January 1st, 1984- January 2nd, 2011. This map should’ve been abandoned when we arrived. What’s today’s date?”

“Apart from the collection, the goat is worth…” The captain typed into her device. “3.7 million USD according to your timeline’s inflation rate. The complete collector's edition of these tokens is 30 million USD.”

“Ssstaaaay?” A small, steady voice asked behind the metal suits. “I made …this.” Rafael pulled a bolo neck-tie from his pocket. The centerpiece was fashioned out of circular stone, carved with a stick-figure boy and goat. Rafael’s left shoe was missing yellow laces. The stone was glued together to his missing shoelace. He fastened the tie around Kevin’s neck and pat in between his horns. Kevin gave him a playful head butt in return.

“I don’t know anything you said, or what a PNC is, but I know my son.” Humberto stepped behind his son, “If there’s anyway Kevin— I mean, the goat, can stay.”

The captain shook her head. “3.7 million dollars.” The suits grabbed the goat. The captain punched more buttons into her device and the barn started glowing. Rafael ran after Kevin.

“Money?” Rafael held out a handful of pennies and two crumbled dollars.

A massive suit with a purple helmet tapped the captain’s shoulder. A deep metallic followed. “Captain, read this.” The suit handed the captain his device. “It’s KVN’s timeline error insurance policy.” The captain scrolled through the device, nodded, then handed it back to purple helmet.

“We’re done here. Leave the goat. Let’s go.” The captain’s suits marched back into the fluorescent barn. “Sorry for the inconvenience. Tom Brady and the Tampa Bay Buccaneers win the Super Bowl against the Kansas City Chief next year 31 to 9.” The captain followed the rest of her crew into the barn and the magenta glow and metal clanging whirled to a stop.

“Kevin!” Rafael wrapped his arms around the goat.

Abuelita, still wearing the glasses, her back towards the commotion, “¿Quién es Kevin?”

More stories from Danielle Allen and writers in Futurism and other communities.