The Girl in the Unknown Room

by Jory Dunshea 11 months ago in science fiction

A piece of strange machinery and a slightly rusted lockbox 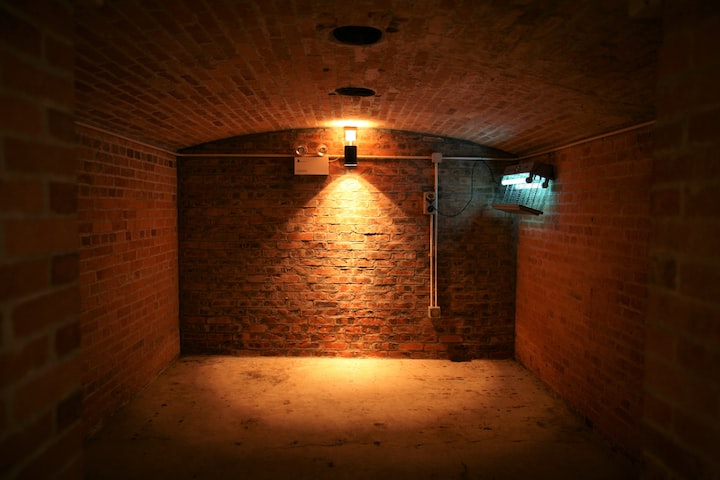 Photo by Kdwk Leung on Unsplash

Jane turned on her phone light and swept it over the room she didn’t know existed. The one she had fallen into as evidenced by the hole above her head. The beam illuminated the space, revealing a concrete floor and walls, a piece of strange machinery and a slightly rusted lockbox. Jane turned circles, but there was nothing save for the two items.

Jane approached the machine first. It sat in the middle of the room, her light bouncing across the reflective metal surface. The machine looked like a projector made by someone who had only seen a projector once. It had a round base which sat flat against the floor. From there, it extended up into a cylindrical case which was fitted with glass panels bordered by sleek, silver metal. Through the glass, a lens could be seen set into the bottom of the cylindrical compartment. A smaller glass cylinder circled the border of the lens and connected to the top. The glass seemed to shimmer, and a faint buzz could be heard.

Jane stepped back from the machine. This thing made her feel strange. Like she wasn’t supposed to see it. Unease filled her. So, she turned to the lockbox instead. The lock was degraded and wasn’t a match against the concrete floor.

She lifted the lid, shining her light inside. Inside sat two thick wads of cash beside a leather-bound black notebook. Jane reached forward slowly and picked up one of the stacks of bills. Using her thumbnail, she flicked through the notes, gauging how much was there. She looked at the money in her hand then back to its pair still sitting in the box.

She tossed the money back into the lockbox. Although she’d found it on her property, she still had trepidations in taking it. Jane instead reached for the black notebook. It was small enough to fit comfortably in a coat pocket. She turned it over in her hands before opening it and flipping to a random page. It seemed to belong to bookmaker, the pages filled with information on different events. But as she skimmed over a few pages, she noticed something.

The book wasn’t filled with odds or betting amounts. No, these were all outcomes. Information on which team won the Stanley Cup a few years prior or how many layups a team achieved in a particular game. Kind of weird to write all that stuff down, but she shrugged. Everyone has a hobby. The paper rustled under her thumb as she moved further to the end of the book. Suddenly, she stopped, her eyes catching the date at the top corner of the page. It read: ‘7th August 2088’.

Jane stared at the date, her mouth agape. She scanned the rest of the page, seeing details on events she had never heard of. As the pages flew beneath her fingers the dates progressed farther into the future until she reached the final page. She snapped the book closed.

Minutes ticked by before Jane began to laugh to herself. This was so stupid. This was obviously just an old room that wasn’t included in the information when she purchased the house. And now someone was using it to store their weird stuff.

Jane scoffed at the thought and turned to leave, but the air was suddenly filled with static electricity. Strands of hair began to float around Jane’s head and a strange buzzing sensation set into her teeth, causing her to clench her jaw. Crackling and popping sounds began to overwhelm the room and Jane pressed her palms against her ears. The sensations mounted until Jane felt she’d be vaporised, reduced to ash and a pile of aching teeth. Then, a flash of violet light filled the room, and she shielded her eyes. She turned, blinking as she tried to dispel the bright spots swimming across her vision.

A voice came from in front of Jane, its tone confused and hostile. The silhouette came into focus as Jane’s eyes readjusted, revealing a young woman standing before her. Her arms were stretched in front of her, a weapon clearly at the end of her extended hands.

“Answer me!” the young woman yelled, gesturing aggressively with her gun.

Jane tried to answer, but only babbling nonsense came out, her eyes transfixed on the weapon pointing in her direction. The barrel was short and wide. Thick, ridged piping wound its way down the grip, creating an appearance of biomechanical engineering. In contrast to the weapon, the young woman was dressed in flared corduroy pants and a tucked in yellow, button-up shirt. A patterned scarf was tied around her neck and a leather satchel hung across her chest.

Seeming to notice the terror on Jane’s face, the woman lowered her weapon and sighed heavily.

“Dammit, you’re a Linearite, aren’t you?” she asked, her eyes moving to the machine in the centre of the room. “Ugh! This stupid machine!” she cried, throwing up her hands in exasperation before moving towards it, completely ignoring Jane.

“Who are you?” Jane asked, her voice coated in fear and confusion. “Where’d you come from? What’s that machine? What is this place?”

“I’m Terraxia,” the young woman answered, her attention focused on the machine. “I came from 1974. That machine is a cloaking machine made to prevent people like you from finding things. But instead, it decided to malfunction and make my life hard!”

Terraxia spoke quickly and seemed to aim that last part at the machine itself, slapping her hand against the thick glass exterior.

Jane’s mouth stood agape as she watched her smack the machine in frustration, which then let out a low whirring sound before falling silent. Terraxia let out a frustrated yell and before Jane could process anything she’d been told, the bare bones room began to change.

Flickering florescent lights began to appear along the walls, illuminating the space. A dull, wooden wardrobe appeared against one of the walls. A Persian rug materialised and sat rolled up in one corner, while paintings covered in dusty sheets appeared next to the wardrobe. Jane’s eyes widened as they swept across the room, now able to see things that had been hidden from her previously.

A dusty hutch filled with exactly eight Fabergé eggs, an ancient looking Japanese sword and what seemed to be countless pieces of extravagant jewelry. Large shelves appeared above the lockbox, making it seem like the least valuable thing in the room, shoved away. Terraxia’s voice broke the stunned silence.

“Just so you know, I’m going to have to erase your memory of this.”

Jane turned toward her, tearing her eyes away from the treasures.

“Erase my memory?” she replied tensely. “What’re you talking about? What the hell is going on?!” Her voice cracked towards the end, her tone becoming shrill.

“Look, I know this must be confusing,” Terraxia sighed, “but I don’t have time to explain time travel.”

“Time travel?” Jane asked, her voice barely above a whisper.

“C’mon,” Terraxia groaned, rolling her eyes. “I know you’re a Linearite, but you don’t strike me as stupid.”

“It’s what time travelers call people who can’t or don’t know what it is.”

“So, what is all this stuff? Are you some kind of… time thief?”

“I guess,” she replied, shrugging. “Look, I don’t really have time for this, ironically enough. I just came here to get something. So, once I do that and erase your memory of this, I’ll be on my way.”

Terraxia moved away from the machine and towards the lockbox. She reached down, pulling it out. Jane heard her mutter under her breath in annoyance at the smashed lock. She turned back to Jane, the little black book in one hand, the cash in the other.

“Here, take this,” Terraxia said, tossing the cash to her. “Seeing as I’m going to erase your memory, I’ll make it so you think you found it hidden somewhere upstairs.”

Jane caught the money clumsily. “T-thanks…” she replied, unable to think of anything else to say.

She shrugged. “Also, don’t worry, it’s all legitimate. You won’t have any trouble spending it.” Terraxia slipped the black book into her satchel and replaced it with what looked like a futuristic PDA. “Okay, now I have to erase your memory of this.”

Jane took a small step backwards, away from Terraxia. “What if you erase more than just this?” she asked fearfully.

Jane’s protests were cut short as intense electrical buzzing filled the room, accompanied by the appearance of a red orb of light. The two women turned towards the orb which was floating in mid-air and seemed to be growing with each second that passed.

“Damn!” Terraxia yelled. “They found me!”

“Who found you?” Jane asked, her voice wavering as her heartrate increased.

She began fiddling with a device which was secured around her wrist while the orb dilated into something portal-like. Two figures could be seen in the centre, slowly coming into focus. They were dressed in militant style clothing with sleek black helmets covering their faces. Nasty looking weapons were clutched in each of their hands and crimson electricity sparked around the edge of the now portal.

“Time Wardens?” Jane asked, stumbling backwards from the pulsating rift. “What are-”

“There’s no time! You have to come with me. Now!” Terraxia finished whatever she was doing with her device and turned to Jane, hand extended.

“Go where?” Jane looked between Terraxia and the now fully opened portal.

“They will kill you, do you understand?!” she bellowed. “No memory alteration, no mercy. They will vaporize you to get to me. Now give me your damn hand!”

Feeling the pressure of her limited options, Jane squeezed her eyes shut and reached out her hand. Terraxia snatched it up and activated her wrist device. Jane heard a robotic voice yell for them to stop, but it was too late. The voice was heard, then gone, as Jane’s body was overwhelmed by the sensations she had felt earlier at Terraxia’s appearance, now amplified by a hundred.

Only seconds had passed before the two were once again in stable reality, but to Jane it had felt like hours. She collapsed to the ground as they popped into existence, her hand slipping from Terraxia’s. Her eyes opened slowly, adjusting to the harsh sunlight that beamed down.

Before her was a wasteland. Dried and cracked earth spread out in front of her, devoid of life. A crumbling city was visible on the horizon. The air was still and stiflingly hot. But it was the silence that enveloped this place that scared Jane the most.

“C’mon,” Terraxia said, helping Jane to her feet. “They won’t find us here. No one comes here, not even Time Wardens.”

Jane opened her mouth to ask why, but her question was answered as an inhuman roar filled the air. The sound caused her heart to pound frantically in her chest. Both women watched as one of the still standing buildings began to shake violently, before crashing downward. Another roar rang out, louder than the last and Jane caught a glimpse of something large and serpent-like dart among the remaining buildings.

“People playing God never leads anywhere good,” Terraxia muttered, shaking her head. Her eyes followed what looked to be a tail whipping around a building and out of sight before turning towards Jane. “Hey,” she said, “I just realised I never asked your name.”

“It’s Jane,” she replied, her eyes not leaving the wastes that lay in front of her.

Read next: Ophelia meets her doom