'Sense8' Just Got Uncanceled — At Least For Two More Hours

by Rachel Carrington 2 years ago in scifi tv

Well, Sense8 fans, it's time to rejoice. Even though Netflix couldn't provide an additional season, the streaming service has committed to a two-hour movie to finish the series.

After the abrupt cancellation of Sense8 on a cliffhanger in May, fans took to social media to demand a renewal. They gained more than 500,000 signatures on a petition, seemingly all to no avail. Netflix wouldn't renew the show, telling its 1.5 million fans on Facebook that they tried to make it work but just couldn't.

Well, Sense8 fans, it's time to rejoice. Even though Netflix couldn't provide an additional season, the streaming service has committed to a two-hour movie to finish the series. The news was announced on the Sense8 Twitter page along with a heartfelt letter from Lana Wachowski: 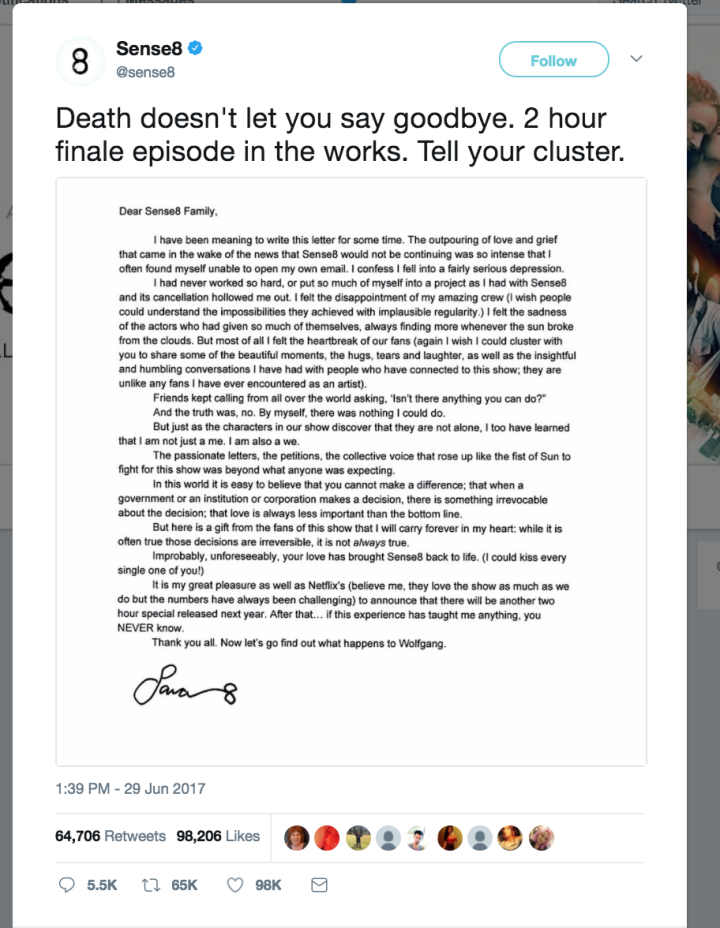 Lana Wachowski credits the show's fans with bringing the series back to life for the closure it deserves. Here's the full text:

I have been meaning to write this letter for some time. The outpouring of love and grief that came in the wake of the news that Sense8 would not be continuing was so intense that I often found myself unable to open my own email. I confess I fell into a fairly serious depression.

I had never worked so hard, or put so much of myself into a project as I had with Sense8 and its cancellation hollowed me out. I felt the disappointment of my amazing crew (I wish people could understand the impossibilities they achieved with implausible regularity.) I felt the sadness of the actors who had given so much of themselves, always finding more whenever the sun broke from the clouds. But most of all I felt the heartbreak of our fans (again I wish I could cluster with you to share some of the beautiful moments, the hugs, tears and laughter, as well as the insightful and humbling conversations I have had with people who have connected to this show; they are unlike any fans I have ever encountered as an artist.)

Friends kept calling from all over the world asking, ‘Isn’t there anything you can do?’

And the truth was, no. By myself, there was nothing I could do.

But just as the characters in our show discover that they are not alone, I too have learned that I am not just a me. I am also a we.

The passionate letters, the petitions, the collective voice that rose up like the fist of Sun to fight for this show was beyond what anyone was expecting.

In this world it is easy to believe that you cannot make a difference; that when a government or an institution or corporation makes a decision, there is something irrevocable about the decision; that love is always less important than the bottom line.

But here is a gift from the fans of this show that I will carry forever in my heart: while it is often true those decisions are irreversible, it is not always true.

Improbably, unforeseeably, your love has brought Sense8 back to life. (I could kiss every single one of you!)

It is my great pleasure as well as Netflix’s (believe me, they love the show as much as we do but the numbers have always been challenging) to announce there will be another two hour special released next year. After that. . . if this experience has taught me anything, you NEVER know.

Thank you all. Now let’s go find out what happens to Wolfgang.

According to The Hollywood Reporter, a Netflix spokesperson agreed that the fans deserved a better ending:

"After seeing that the cancellation was a total cluster, we decided to give Sense8 fans the ending they totally deserve."

The two-hour finale will air in 2018 on Netflix.

I'm an avid writer of fiction! I've had over 53 novels published and wrote over 350 articles for Moviepilot before it closed. I can be found on the web at www.rachelcarrington.com. #adiscoveryofwitches #wcth #sealteam #swat

See all posts by Rachel Carrington →