by Pranjul Tyagi 8 months ago in future

What are the chances that we can predict it right? 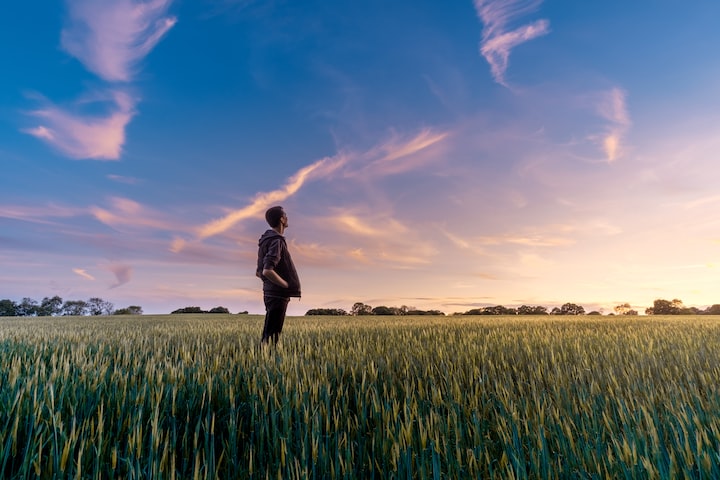 Photo by Benjamin Davies on Unsplash

Yes, I know you’re quite familiar with this term but just to be sure you understand this stuff (I call it Immediate future theory or IFT) completely, let me start with the basics. According to oxford dictionary future is defined as, “the time still to come”. Since we are in the present ‘the time still to come’ aka the future appears uncertain; unpredictable. The future holds infinite possibilities for any event waiting to happen out of which only one possibility will determine how the event will actually unfold.

Now, the question is can we see it? Can we sort out the correct possibility out of infinite number of possibilities waiting to happen with each one of them being equally likely? The answer is no, obviously. Or is it? Yes? Maybe. Lets give time a chance to decide with this thought experiment.

Imagine a bowler at bowling end about to bowl to a batsman. Can you predict where the batsman is going to hit? No? Well hold on, you can't because you’ve got infinite possibilities to consider. At this moment, a bowler has many choices to bowl and the batsman too has uncountable choices. Now the bowler starts running and bowls towards the offside. Can you now predict where the batsman going to hit? Still no? But maybe this time you’ve got better chances because half of the possibilities of batsman hitting to the leg side are gone (assuming batsman to be an ideal one, not Ab De villers!).

Now you notice that ball is over pitched again leading to the cancellation of half of the possibilities. This time you’ve got much better chance at predicting the ball. Now the batsman instinctively took the forward stance, that means now he can drive the ball in a very limited number of ways only. Now, can you predict? Well if you said “yes, maybe”, then congrats! you’ve come a long way from saying “no, obviously”.

Now, in the beginning you had no idea what is about to happen, where the ball might go? Why? Because of uncertainty: I mean there were too many unknowns at that time. But as the event(batsman striking the ball) drew near, the possibilities reduced drastically to a specific number. What if batsman leaves the ball? That too is one of the possibilities which would have become clearer just moments before the event. Lets look from batsman perspective he too like you have no idea where the ball might come. So he just waits. He need to see the position of the ball(cause) to drive it away in the specific direction(effect).Now there is an old saying that cause is always followed by effect but in this case, the batsman doesn’t wait cause to happen, had he done so he would never have hit the ball. So he takes a leap of faith and predicts the ball’s position. He might not see the distant future in this case, but moments (microseconds, infact) before the event he can see/predict it. Ok, enough cricket for now, lets take a more common example.

This time consider yourself observing a biker on a single road about to reach an intersection. He might take left, right, go straight or maybe his bike fails and he doesn’t even reach there. Again infinite possibilities and we don’t have a single idea when he’s say 1km away from intersection. But as the approaches the intersection the possibilities again reduce exponentially and are down to maybe four or five possibilities. Still you might not be able to predict or see it until the very moment of happening the event. Agreed?

In both examples, we were able to predict(you can never see!) the future just some moments before. But why only some microseconds before? Why can't we see it some seconds or minutes before? Actually, you know the answer yourself. Because there were infinite number of factors(possibilities) to be considered. The greater the time interval between your prediction and the event, greater will be the number of factors to be considered or the possibilities to rule out making it more difficult to predict the future. Now, you might be asking yourself what you can possibly do to see the future for further time intervals? In the above example, if you were to determine where will the biker go in the above example you might find where each route leads to, his mood, his past history of travelling along the same route, the time at which he’s driving, his recent phone calls and many more inputs(lakhs of, maybe).Imagine if you own a supercomputer that consider all these factors(which are nearly infinite) and solves them, the you might predict the future.

Another thing I would like to put to light is: math. Our mind is like a computer processing millions of instructions every seconds. Constantly but unconsciously making calculations before picking that coffee cup or jumping across two buildings or running. We can either calculate mathematically, the time required by a free falling body to reach ground or we might just predict it. Here again, the longer the time interval of free fall, the lesser will be the accuracy of prediction. So, we don’t need mathematical formulas for prediction. We are so used to some phenomena that we don’t even have to think about them. All the calculations pertaining to those phenomena are done unconsciously to arrive at optimum result.

So, the final question is why we aren’t able to predict long term future events? You can! but for that you have to take lots of factors into consideration, which we aren’t quite used to. You can take the economist Nouriel Roubini for example who predicted the great recession of 2008 and earned the title of “Dr. Doom”. I think predicting the future is like solving a very large set of equation with many unknowns which is quite herculean for a simple human mind. But as the time of the event approaches these unknown variables vanishes gradually, making the solving of equations easier.

For the closing part, I would say we do see future in everyday life although it’s for a very short interval. And why we shouldn’t? Because if we have even a short vision of what will happen in the future, we will be less worried and feel a little bit confident and calm because we can manage our life in the world that is changing every second. In nutshell, we just explored the possibility of seeing long term future which we may hopefully see in the future itself.

Feel free to suggest any improvements and let me know what you think about it.

You can connect to me via mail [email protected]

Hey there! Nice to meet you.

I am an mechanical engineer by passion and love to write about things, experience from unique perspectives & insight.

I love to watch The Office on repeat and a fan of Sherlock Holmes Tv series too.

Read next: The islands where flies walk and moths crawl, prove Darwin right