On Your Marks, Get Rex, Go: Science Finally Answers If You Could Outrun A T-Rex

by Tom Chapman 2 years ago in science

Over the past four films, there is one question that has always puzzled us: Can you really outrun a T-Rex?

We all know that Jurassic Park could never happen (more's the pity), and unless you are Dr. Ross Geller from Friends, the fact that the dinosaurs don't look enough like birds and the Velociraptors are too large probably won't keep you up at night. Most people enjoy the films for the sci-fi horrors they are and forget the science behind the scenes. However, over the past four films, there is one question that has always puzzled us: Can you really outrun a T-Rex?

To mixed success and for 24 years, we have seen various cast members of the Jurassic series try and outrun a toothy T-Rex. If 2015's Jurassic World is anything to go by, all you need is a sturdy pair of heels to escape a galloping carnivore who is hungry for flesh. However, answering the age-old question far better than Steven Spielberg or Universal can, scientists have finally put the issue to bed — well, sort of.

Put on your running shoes.

Fan-favorite Rexy is tipped to have a starring role in J.A. Bayona's upcoming #JurassicWorld2, and as the undisputed mommy of the franchise, it just wouldn't be a Jurassic film without a T-Rex. While we have seen the Rexes as speedy killing machines on our screens, academic journal PeerJ has actually done some archeological digging on the subject.

It is suggested that the size and weight of a T-Rex would stop it being able to run, but the dinosaurs could instead do a brisk power walk of no more than 12 mph. Considering that a human can run at around 15 mph (20 for an athlete), we would probably be safe, but it is still cutting it a little close for my liking. Other research has put a Rex's speed at anywhere between 11 mph and a staggering 45 mph. A new study by Manchester University (thankfully) confirms the lower end of the spectrum. 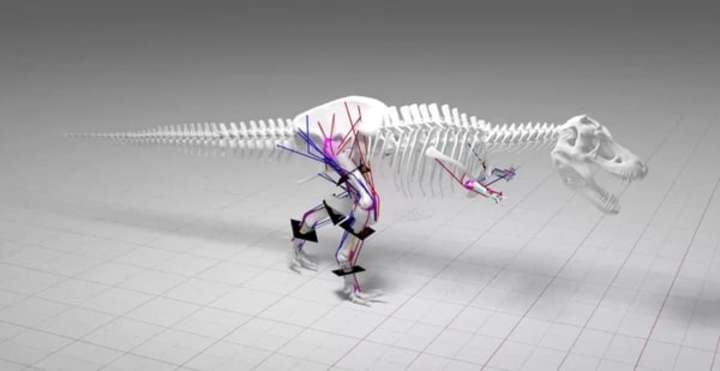 The latest study by William Sellers from Manchester University’s School of Earth used simulations to predict that a T-Rex would fit with their evolutionary chain and run in a bird-like manner. However, as a relative Goliath of the dinosaur kingdom, a T-Rex wouldn't be able to run because the force would snap its dainty legs. However, the likes of Sellers and other scientist agree that they would need to run similar studies on T-Rex's prey like Edmontosaurus and Triceratops.

The T-Rex was still undoubtedly a feared predator, and all it had to do was be quicker than its prey, not run a marathon. As Thomas Carr, a paleontologist at Carthage College in Kenosha tells Gizmodo:

“It doesn’t matter if adult T. rex couldn’t run: all it had to do was move more quickly than its prey. The available herbivorous dinosaurs in its environment—Edmontosaurus, Triceratops, Ankylosaurus—were all much slower than an adult T. rex— it was just slaughter in the slow lane.”

All this together, I still would take my chances against the formidable ferocity of a Rex, and as a slightly more mature Jeff Goldblum than when he entered the franchise, I wouldn't place bets on his dodging a Rex run in Jurassic World 2. With rumors of weaponized dinosaurs in next year's sequel, who knows, perhaps those crafty InGen scientists will have invented a pair of T-Rex-friendly running shoes?