by Erin O'Neil about a year ago in fantasy
Report Story 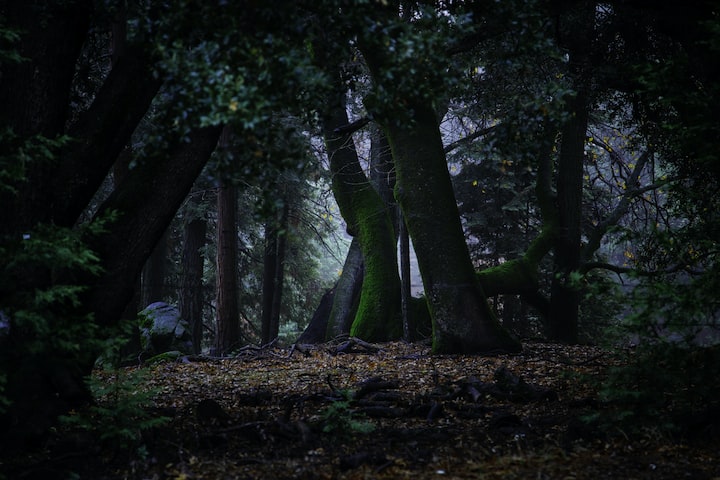 Rueth heard her heart beat in her ears as she ran through Niadale Forest. The sound of shouting echoed in the distance, but she didn’t dare look back. Her legs burned as she pushed herself to run faster. Why did I have to inherit dad’s short legs?

She looked up to the sky. The moon and stars were out now. She wasn’t sure how much longer she would be able to keep this up, she’d been running since midday.

She scanned the forest ahead with her keen elf eyes. Off to her right, she spotted an outcropping of rock with what appeared to be a cave entrance. That’s my best shot. Hopefully I can hide there until morning. She turned sharply to the right, and headed straight for it.

Alistair’s ears perked up at the sound of footfalls steadily growing louder. He stood, readying himself for a fight.

Rueth collapsed just inside the cave’s entrance. She closed her eyes for a moment, catching her breath. Her eyes snapped open at the sound of whining. She sat up slowly and took in her surroundings. She wasn’t alone, nor was she in a simple cave. She was in a wolf den.

Alistair turned to his mate, Raine. “The girl has The Gift.”

Raine nodded, “She smells of fear.”

“Please, they want to kill me.” Tears rolled down Rueth’s face as she watched the two wolves consider her.

“Who wants to kill you?” Raine asked.

Alistair stiffened and snarled, “Were they following you?”

“Yes. I could hear their shouts behind me, I don’t know how close they were.” Rueth glanced towards the den’s entrance as if she expected these soldiers to suddenly appear.

“Star, you watch the pups. The rest of you come with me.” Alistair said, leading the pack out into the forest.

Rueth turned to the one who had stayed behind. Star. “Where are they going?”

“Checking the pack’s territory. Making sure those that followed you aren’t too close to the den.” She tilted her head towards the pile of pups sleeping in a corner. “Need to be sure the little ones won’t be in any danger.”

Rueth sighed, and curled in on herself, wrapping her arms around her legs. “I’m sorry if I’ve caused the pack any trouble.”

Star nuzzled Rueth’s hand with her snout. “You didn’t know we were here. Nothing to be sorry for. You look exhausted, come lie down with the pups.”

After a moment’s hesitation, Rueth took her bedroll from her pack and laid it down near the pile of pups. “Thank you.”

“It’s no trouble dear,” she paused, thinking for a moment. “What’s your name?”

“Sleep now Rueth. I’ll wake you when the pack returns.”

“Rueth. Rueth, wake up. The pack is back.” Star nudged her shoulder.

Rueth opened her eyes to find the whole pack sitting around her. “Did you see them? Are they close?”

“No. We caught their scent at the edge of our territory. It would seem they are headed north towards the valley.” Raine said.

“Now that we have determined there is no imminent danger, why do these soldiers want to kill you?”

“They want to kill me because I’m a hybrid.” At the wolves’ confused looks, she sighed. “My mother is an elf and my father is a dwarf. That’s why I have pointed ears, but will never be taller than I currently am.” She looked down at herself. “I’m a whole head taller than my father, but only come up to my mother’s shoulder.”

“I don’t understand. Why is that a reason to want you dead?” Raine asked.

“I’m not really sure myself.” Rueth said. “All I know is that early this morning -” She scrunched up her face. How much time has passed since I left home? “Or yesterday morning, a boy came racing into the village. He said that the warlock Vorhan had seized control of the Capital. That he was killing all hybrids. That his soldiers were headed for the village.” She swallowed past the lump in her throat, holding back tears. “My mother grabbed my travelling pack, and shoved it into my arms. She told me to run. So I did.”

There was a moment of silence. Raine and Star sat on either side of Rueth, placing their heads in her lap.

She ran her fingers through their fur, the act calming her.

“Dawn isn’t too far off. We should all get some sleep.” Alistair turned, laying down midway between the den’s entrance and the pack.

The rest of the wolves followed suit, quickly falling asleep.

Rueth turned to Star. “I never asked, what are their names?” She pointed to the two wolves who had done all the talking.

Rueth smiled as she laid back down. Alistair and Raine, thank you. She closed her eyes, falling into a restless sleep.

The following morning, Rueth stood at the den’s entrance, saying goodbye to her new friends.

“Where will you go?” Star asked.

“West, to the Scarree Mountains. There are a few villages out there. I’m hoping I can warn them of what’s coming.” And hopefully, I can get some answers. Like why Vorhan wants all hybrids dead.

If you enjoyed this story, please like and/or leave a tip!

More stories from Erin O'Neil and writers in Futurism and other communities.