Spoiler-Free Yet Full of Flavor

Of all the things Turkey is known for, early theatrical releases of international blockbusters isn't one. And yet--Turkey debuted Rogue One on December 14th, 2016...two days ahead of the U.S. release date. Which means, if you live in Turkey (and I do) then you're ahead of the pack!

Oddly enough, though, "packed" is not how I could describe the theater I attended. Perhaps because the version I was watching was "original," meaning not overdubbed. Or perhaps the town I live in just isn't full of Star Wars maniacs like myself (I was, admittedly, "this close" to attending the show in full regalia, i.e. my Rubies Supreme Edition Darth Vader costume...looking back, I guess I'm glad I opted out in the last moment).

But enough with the small talk; I know your patience grows thin! So let's get on with the review...I will not give any spoilers, however some of the review will mention tidbits which are commonly-known to anyone following the news leading up to the release.

What I Liked About Rogue One

It's a very good film. Dark, gritty--you can tell that from the trailers. But there is a lot to like besides just the sleek look of the film, and maybe (sorta) even a few things to love, if you're a die hard fan. There are certainly a lot of minor character cameos, including a recurring one by a beloved prequels star Jimmy Smits as Bail Organa. No, that's not a spoiler; that news has been out since at least August. I always liked that character in the prequels, and was very glad to see him put to good use here, thus bridging the gap between the prequels and Episode IV...and thus hopefully putting to rest the notion of "rebooting" the prequels.

Of course non-fans will have no idea who this character is, if they hadn't seen the main Star Wars movies. Same goes for the younger Mon Mothma, who was notable in the trailer for Rogue One (even though her part in Return of the Jedi was not particularly vital apart from her eerie glazed expression and the line, "Many Bothans died to bring us this information.").

Rogue One is no stroll down memory lane, as was The Force Awakens, though. As the name suggests, it breaks from the pack. But as much as it does differ from the rest, it's all Star Wars...but stripped of nearly every ounce of the magic and sense of wonder kids love about the main series. In other words, this ain't a kids flick, folks. Unless you'd take your kids to Saving Private Ryan...

There are plenty of scenes full of vintage Stormtroopers mixed in with those 8" tall Death Troopers you've seen stalking the beachhead. The dudes in white serve as a reminder--they keep the fact you're watching a Star Wars movie in the forefront of your mind. They are the continuity, let's say. Not to mention, of course, the looming Death Star, which does seem to be lurking around every corner... You never see that thing flying through hyperspace, though. It just sort of appears!

The absolute best cameo by far is that of that of Darth Vader. He gets a brief scene with main antagonist Director Krennic (Ben Mendelsohn...more on him in a sec), and at first I thought that was going to be it...a brief little blip of the big guy in black.

I was wrong. Thank the Maker; I was wrong! This is not a spoiler but if you don't want to know about Vader's cameo, skip the next paragraph!

Director Garth Edwards does right by the Sith Lord, finally delivering to the fans what they've wanted lo these many years...a new lightsaber-wielding action scene with Vader finally cutting loose against those Rebel scum. It was short, unexpected, and totally kickass!!

More Things I Liked About Rogue One 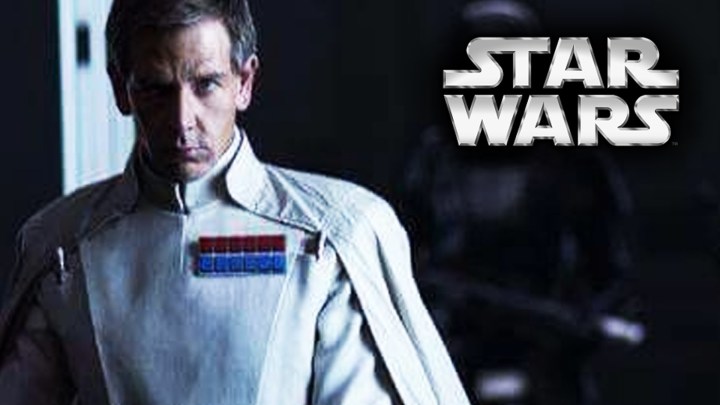 Orson Krennic is a decent enough villain. Liked, didn't love. The costume, let's be honest, is pretty killer, though. And Ben Mendelsohn? Forget about it; he slays in all his movies...but. I don't know; the script gave him some goods scenes, but he could have done so much more. I guess I wanted to see a sort of Hans Landa (the Nazi colonel from Quentin Tarantino's Inglourious Basterds). The opening sequence certainly suggested that's what was coming.

And I feel Mendelsohn is capable of delivering that sort of unhinged bad guy that Christoph Waltz got the play. Nonetheless, it didn't pan out. Krennic gets overshadowed by his boss aboard the Death Star...and I'm not talkin' Vader, by the way. 'Nuff said there.

I liked the cast of misfits and rebels led by Jyn Erso (Felicity Jones) and Captain Cassian Andor (Diego Luna). There was some decent tension between the two, though it didn't spark into any romantic chemistry a la Han and Leia. My only issue was, apart from those two it seemed there wasn't enough character development because there were so many others to introduce. Not counting the half-crazed "extreme" Rebel Saw Gerrera (a mildly overacting but always entertaining Forest Whitaker), we also had a blind Force-sensitive named Chirrut (the excellent Donnie Yen who, based on his introductory fight scene could possibly give Darth Maul a run for his money!), the stoic, heavily armed Baze (Jiang Wen), the nervous wreck of a pilot Bodhi (Riz Ahmed), and the wise-cracking, oddly-shaped K-2SO (Alan Tudyk).

Of the above group, Chirrut was the emotional core of the movie, the man who believed in the Force and trusted his life to it, stepping out in front of blaster fire with nothing but his faith to carry him. Luckily Stormtroopers are still piss-poor shots, as always! 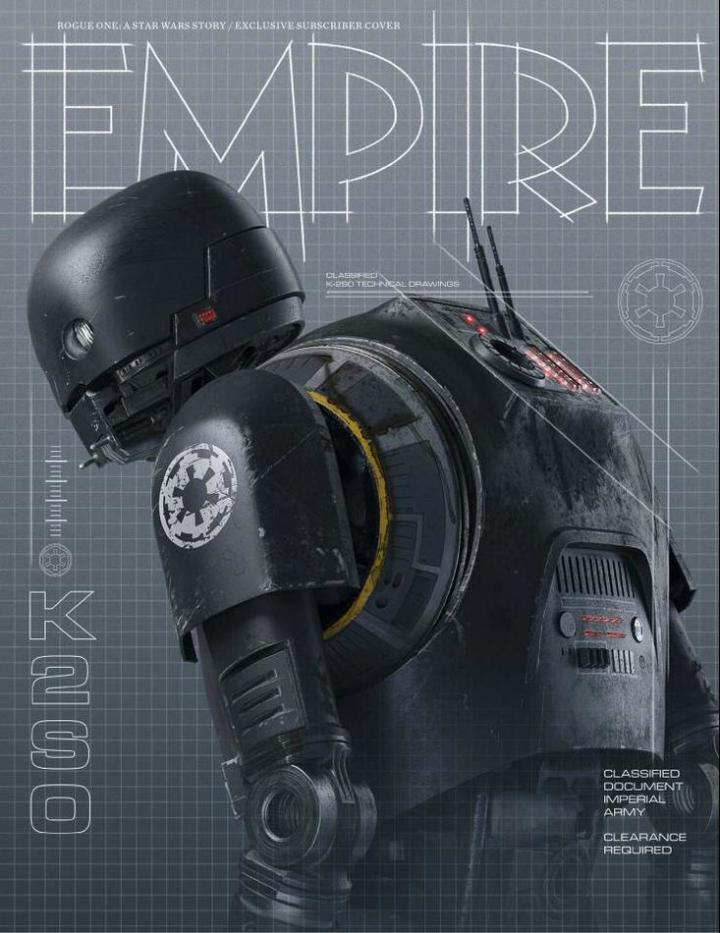 Give him a chance!

K-2SO, though, was the surprising breakout character for me. From the pictures of him/it, I didn't expect to be a fan. Again, I was wrong. K-2 was the best part of the movie (aside from that Vader fight scene!). Indeed, to be honest I saw the film twice because I wanted my Turkish friend to watch it, too...and he agreed, K-2 takes the cake.

He is drool, witty, and does not give a damn. Unlike the protocol-obsession C-3PO, K-2 began life working for the Empire and is an admitted strategic analyst. He's also a highly capable fighting unit with a penchant for intelligence and recon-gathering. He doesn't flail around in a panic when something goes awry. Oh, sure, he'll spout some derision at you if you're clearly making a bonehead mistake, offering to tell you your calculated odds for survival and all that...but in the end, K-2 shuts up and plays ball. And he's a very heavy hitter!

Because I saw this movie in Turkey, the handful of other audience members were mainly Turks and my guess is they missed some of the subtleties of K-2's sarcasm. A couple of times I recall laughing out loud; I was the only one. The dialogue was subtitled (not overdubbed) in Turkish, so there is no telling what was lost in translation.

Like C-3PO, K-2SO does lean hard on that upper crust British accent, though...funny, since Tudyk is from Texas, but you'd never know with that voice! To me he's got a sort of Marvin the Paranoid Android (Hitchhiker's Guide to the Galaxy, the film version) going on, and I like it. I like it a lot. 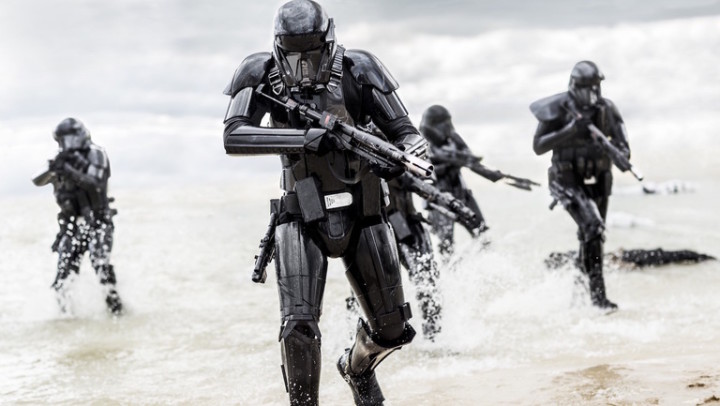 Not your parents' Stormtroopers

Well frankly the movie tends to be a bit of a Debbie Downer. As mentioned, there is not much of that trademarked "fun" element normally sprinkled like pixie dust over most George Lucas fare. Even J.J. Abrams managed to liberally infuse Force Awakens with humor and good ol' fashioned storytelling. Some might argue he took it a bit too far...

But Gareth Edwards and humor? Not bloody likely! Not his style. At all. As you will see when you watch it.

This was not entirely unexpected, mind you. I've seen some of his prior works. But I suppose I was a little surprised that Disney let his bleak vision of the Star Wars universe find its way to the big screen. Some fans will appreciate what he has done.

I appreciated the thoroughness and attention to detail, and I loved the special effects. I am not sure how I feel otherwise...

This is arguably the best looking of all Star Wars films, thanks not only to the effects but the sheer beauty of so many of the shots. He's got a wonderful eye for composure. But getting back to the feel of the movie...when the reprogrammed Imperial droid is the only thing to make you crack a smile in the entire two-plus hours, it does make you wonder--what does the future hold for the franchise? Will Disney take it darker...or was Rogue One truly a one-off rogue?

In the end, I hope that it was.

See all posts by Matt Cates →