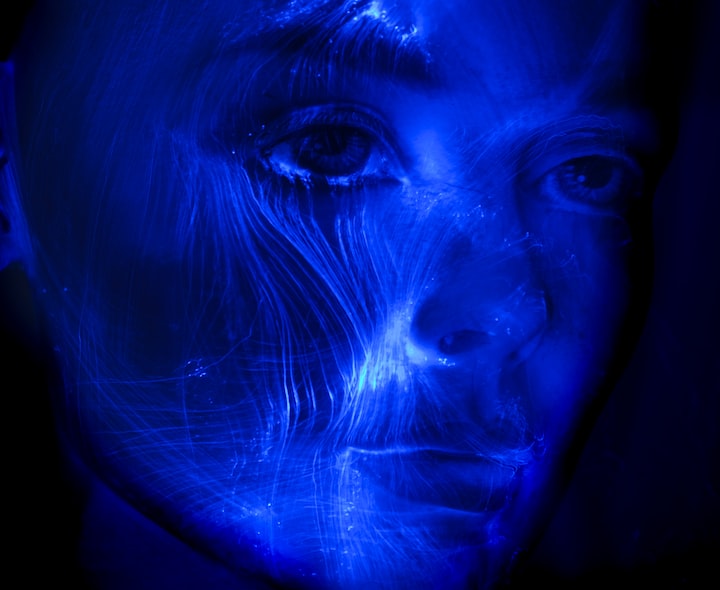 Screaming is strictly forbidden on Interstellar Island 7743 (II-7743 for short), a huge chunk of rock at the edge of the Andromeda Galaxy, marginally hospitable to human life as long as the requisite Life Modulation Attire is worn or you remain inside the domed areas.

And thought is strictly monitored and regulated through the Interstellar Division of Cohesiveness and Advancement (IDCA) by means of a Thought Assistive Device, TAD, implanted into every citizen.

At first, it started as a strange intermittent buzzing that slightly garbled and muffled assigned thoughts coming in. It wasn't terribly bothersome, aside from the discomfort just above her right ear, where the device was implanted. Not pain, just discomfort, which she found was relieved by pressing on the affected area with her finger.

But as the week wore on, it became progressively worse. By Day 4, she was getting buzzed out of the blue. Small electric shocks interrupted her throughout the day as she went about her usual activities.

She hadn't had any thought detrimental to the collective or to the II-7743 leader, MSD-UK, known affectionately as Mikey U.

She was just getting punitive shocks as if she were.

Then, from Day 6 on, nothing. No assigned thoughts. No work directives. No electromagnetic admonishment for momentary notions of dissatisfaction. Just nothing.

She contacted IDCA, panicked. She knew she was in trouble when she stared blankly at her assigned feeding packet and couldn't figure out what to do with it.

But IDCA was backed up. TADs had apparently malfunctioned all over the island. The silicon to make and repair them was in short supply. She was number 3711 in line for service. She'd have to wait.

As a Trustee of the Collective, Cath had not been administered a punitive shock for 17 years running. Her clean record of faithful obedience and loyalty had earned her a privileged status. But it also placed her near the bottom of the list in terms of priority. As such a trusted citizen, her thoughts, ungoverned, at least in the short term, were deemed not to be of concern.

The lack of direction, however, troubled her. She requested a department employee be dispatched to examine her.

They went through the standard checks to see if anything was working with the TAD. They sent thoughts and punitive shocks. Nothing. They ran a range of tests to determine the exact cause. Nothing.

Even Mikey U came out of his usual seclusion to visit her at her assigned unit. He was smaller than Cath had imagined. All the posters depicted him as larger than life itself.

He was a bird-like man with a disarming smile and a quick wit. Highly intelligent. His presence in her home was a great honour. It was more than that, it was exciting.

There was something about him, an aura, a presence that both instilled confidence and aroused terror. It was evident even through the Life Modulation Attire, which he didn't require, but always wore as a symbol of urgency and importance.

Cath felt a tingling, an almost giddiness. Not thoughts exactly. Nothing that could be registered in her mind, even if her TAD was working. It was more visceral, more from her core.

Mikey U was very sympathetic. He wrote out step-by-step instructions for her 3 daily feedings, her transport to and from her job as an Education Specialist for the Collective, and left her with a handheld device, something akin to the beeper of 400 years before.

Small and rectangular, it emitted a constant red light. Mikey U called it a "First Generation Thought Device," old technology from humanity's first days on II-7743. It wasn't elegant. It was hardly convenient. But, if she followed his directives to the letter, it would work.

Cath felt so much better with the old backup device. She wanted to please Mikey U. He was their fearless leader. He'd led them through so much, famine, poverty, fear and uncertainty. She owed him her life and her life, she was willing to give.

Cath found herself increasing unsettled as days turned to weeks and weeks turned to months. Her TAD had still not been replaced or fixed. She'd been following the written directions from the leader. But lately, a deep dissatisfaction had befallen her. A cynicism, a scepticism she didn't recognize and certainly didn't welcome.

At first, she reported all her intrusive thoughts. Every single one. Thoughts that what she might be teaching wasn't quite true. Thoughts that maybe Mikey U and his cabinet were living lavishly while others lived at the margins, barely subsiting. Thoughts that she should look into things if there was a way to do so.

Without modulation and moderation, her mind began to explode. Creativity and curiosity filled her soul. At first, it was terrifying. Random, rapid, chaotic waves of everything and nothing all jumbled together. It kept her awake. It disrupted her work and her life like a series of unwelcome visitors.

But eventually, she learned to live with them. And after 6 months of nothing from IDCA, the thoughts became welcome, almost friendly. They became natural as if they'd always been there.

Cath realized she no longer wanted the TAD replacement or repair. She no longer wanted her mind governed. She'd figured out how to feed herself, how to get to work on her own. She was seeing things clearly for the first time ever.

She was happier than she'd ever been. Yet, she was also more troubled.

She adored their leader, Mikey U. She adored the Collective which helped him govern 11-7743. She was grateful for their guidance and care and also fearful of stern reprisal should she suggest any wrongdoing on their part.

But she couldn't help feeling that something was wrong, very, very wrong. And she wondered, with so many TADs still out of commission, how many others were feeling it too.

Retired legal eagle, nature love, wife, mother of boys and cats, chef, and trying to learn to play the guitar. I play with paint and words. Living my "middle years" like a teenager and loving every second of it!

More stories from Misty Rae and writers in Futurism and other communities.