How Frank Herbert's 'Dune' Warned Of The Rise of Artificial Intelligence

“Fear is the mind killer. Fear is the little death that brings total obliteration. I will face my fear. I will permit it to pass over and through me. And when it has gone past, I will turn the inner eye to see its path. Where the fear has gone, there will be nothing.”Only I will remain. - Dune by Frank Herbert - 1965

American author Frank Herbert’s science fiction epic usually just doesn’t get enough respect nor credit, despite its massive financial success. His six official books (plus additional ones authored by his own son, Brian Herbert) have been best sellers and are enjoyed by generations of devoted readers. Officially, Dune is the number one best selling sci-fi novel of all time - with 12 million books so far sold.

The first in Herbert's series was adapted into an enigmatic feature film by director David Lynch (Blue Velvet) - plus several TV versions from cable outlet SyFy. Dune certainly has a loyal fan following, however, compared with Star Wars or Star Trek or even StarGate or Doctor Who, it’s sometimes lost in the shuffle when naming great, influential and substantive sci-fi.

One sweeping cultural difference between the far future majesty and other galactic reality of Dune compared to other more mainstream sci-fi is its conspicuous lack of intelligent tech or artificial intelligence. Herbert’s characters utilize marvelous technology, but none of it ‘thinks’ or has any hint of intelligent planning. No robots, androids nor droids here, thank you very much. While other sci-fi epics deal in fantastic androids and cool robots or super intelligent star ships, the world of Dune gets by with organic smarts - human or, sometimes, superhuman abilities.

This doing away with using A.I. is a basic foundation of Frank Herbert’s fantastic sci-fi world. Was this merely a restrictive plot device or theme? Or, was the author warning us of the rise and negative consequences of a society run by intelligent computers?

The crusade against computers, thinking machines, and conscious robots begun in 201 B.G. and concluded in 108 B.G. Its chief commandment remains in the O.C. Bible as "Thou shalt not make a machine in the likeness of a human mind."

So, how does one manage to deal with the dire warnings over the rise of artificial intelligence? How does turning people into computers sound?

Who needs advanced electronic computers when you have access to highly trained, monk like folk who live and breath calculating data? This posits the notion that we all possess phenomenal capabilities, we only need only to free them through dedication and training. As an Olympian diligently trains for the physical demands of the athletic games, the Mentat trains and hones their mental abilities. They are living, walking computers, and their vast computing power approximates that of supercomputers.

Religious groups, spiritual organizations or churches such as the Catholics, Mormons or China’s legendary Shaolin Monks are historically famous for the rigorous discipline. They gather up devoted individuals to train them hard in the rigors of their belief system. With groups such as the Shaolin monks, they also train their bodies to the very limits of human physical ability. Think of Frank Herbert’s Bene Gesserit a little like obsessive Catholic nuns who’ve been trained in the martial arts of the Shaolin or the Ninja of ancient Japan.

This ultimate control of the physical body allows the most efficient unarmed combat. They don’t rely on guns, knives or sticks. They have no need to conceal a weapon, since their bodies are honed into the most lethal kind of weapon imaginable.

A Bene Gesserit With The Emperor

Our modern jet aircraft fly all over the world in a very different way than when the Wright Brothers first took primitive flight. Jet planes contain technology which make them less and less dependent on human pilots. They fly by wire and utilize full autopilot to ferry passengers without much need for humans. These are complex systems, which although not true artificial intelligence, certainly are looming close - at least in this limited transportation capacity.

Dune’s universe does away with artificial intelligent navigational machines. Guild Navigators must use the spice. They become addicted to the drug. Ultimately, they then bend their mind and senses to plot and steer the great spaceships of the powerful forces who employ them.

When Obi-Wan Kenobi pulls his nifty Jedi mind trick on the stormtroopers in A New Hope, it was one of those memorable movie moments. Way before the Jedi masters wielded their vocal tricks, the Bene Gesserit adepts in Frank Herbert’s Dune demonstrated their own vocally projected mind twist - over a decade earlier.

Have you ever felt compelled to do something because someone spoke to you in a certain tone of voice? We all know what it’s like to be verbally disciplined by a parent or teacher while we’re children. What if a mere word or sentence could urge or even control your actions?

The practitioners of Voice can use subtleties of tone and volume to subconsciously influence ones who listen to the vocal projection. If trained in the use of the vocal hypnotism, one can repel and resist the influence and control. In today’s military, psychological combat tactics using music and sound are used against enemy forces. Life imitating sci-fi art?

Mind altering drugs are nothing new - certainly not in our present time and open society. However, in the mid 1960’s, the notion of ingesting chemicals which expanded the human consciousness was just taking hold of the medical field and in our society's mindset in general. "Turn on, tune in, drop out", urged the psychedelic drug guru and advocate Timothy Leary in 1966.

Melange or spice enables the user to extend their lifespan and invests them with more energy and vitality. For some, it also provides psychic or super mental abilities. Without spice, the Guild Navigators wouldn’t be able to plot courses for the huge space vehicles. Heavy exposure to spice colors the user’s eyes a deep blue. If one is constantly exposed to spice, as with Guild Navigators, their bodies mutate into a kind of fish like form. Maybe that autopilot isn't so bad after all.

The Chosen One Will Come

Besides the resisting or outright ban on any artificial intelligent tech in Dune, the other powerful theme is the coming of the one who will change things - who will buck the system and to shake up the status quo.

They will be written or sung about in prophecy. Folk songs will be performed and poems recited. They will be special. The Chosen One.

From Neo (Keanu Reeves) in The Matrix to the diminutive and unassuming Frodo in Lord Of The Rings to the father complex of Luke Skywalker (Mark Hamill) in Star Wars, we celebrate the coming of the one who’s chosen to complete the arduous task and to even save the world. It’s a compelling literary, mythological concept, which helps to bolster the notion of the hero coming to right the wrong and save the day.

In the Bene Gesserit belief system, this chosen one is prophesied to be a male. But according to ancient prophecy, he won’t be an ordinary man, he’ll be a super powered one - a superhero of sorts. He’ll have awesome psychic powers - able to see the future and with access to genetic memories of thousands of his ancestors.

Herbert used the familiar and awe inspiring mythos of the chosen one to further anchor his decision to do away with artificial intelligence in his epic work. If there’s a person who will come along to show us a better way - to free us of any limiting social or restrictive cultural restraints, he or she would be far more beloved and accepted than a blinking, beeping construct mimicking humanity. The chosen one would be a super being a wondrous and inspirational example of our species to aspire to becoming. 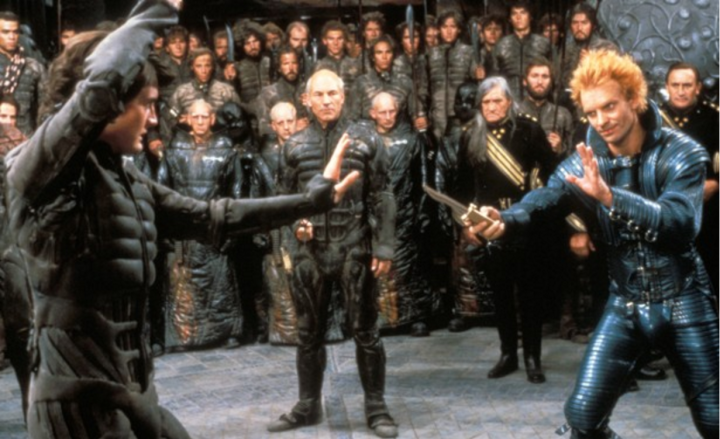 Sting, I Hated Your Last Album!