by Tom Chapman 2 years ago in star wars

Those pesky #StarWars anthology films sure have a tough time of it, don't they? From Josh Trank's Boba Fett movie being cancelled just moments before it was to be announced, to the major reshoots on Gareth Edwards's Rogue One, and now the departure of directors Chris Miller and Phil Lord just three weeks before #HanSolo wraps filming, it seems like they're are all getting off to rough starts.

#Disney has put up a pretty good facade and claims that the duo left due to the tried and tested excuse of "creative differences." However, it sounds like a lot more was going on behind the scenes. In a burn that is likely to hurt more than being frozen in carbonite, it's rumored that the pair were effectively kicked out of their own film. So, while Kathleen Kennedy and co. still say that everything is hunky-dory, we ain't buying it, and apparently we shouldn't!

Speaking to Variety, an (obviously) anonymous source close to the set claims that the directors had always struggled to free themselves from the Force choke of the Lucasfilm execs, and Kennedy in particular:

“It was a culture clash from day one. She didn’t even like the way they folded their socks. They weren’t given the leeway to do what they had to do.”

With Kennedy's extensive knowledge of the Star Wars universe since taking over as its president, and her viewing it as her baby, you can't blame her for taking it all very seriously. Miller and Lord were brought on board to bring a tongue-in-cheek element to the franchise — in fitting with Captain Solo's boisterous demeanor — but something clearly didn't work.

“Kathy, her team and Larry Kasdan have been doing it their way for a very long time. They know how the cheese is made and that’s how they want it made. It became a very polarizing set.”

With Kasdan writing the Solo script with his son Joe, it is also reported it that the father-son duo didn't approve of the directors taking a loose, more comedic approach to their work. ScreenCrush reporter Mike Sampson claims that things finally came to a head when Kennedy demanded that Miller and Lord work with new teams and do reshoots. It sounds like déjà vu from Rogue One — but where Gareth Edwards played ball, Miller and Lord refused: 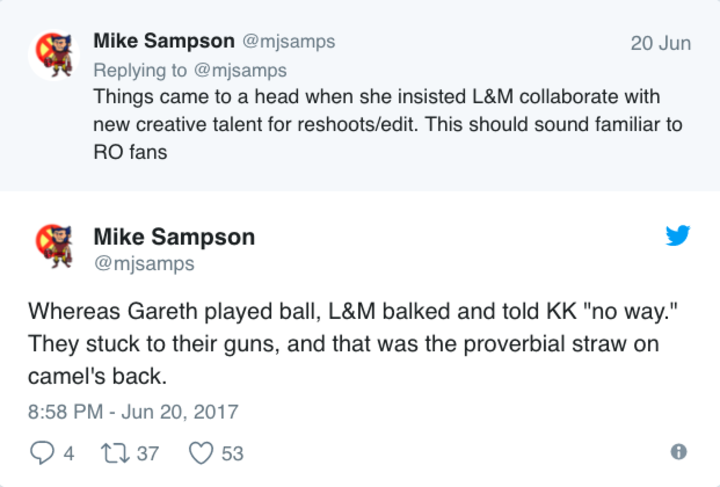 These comments don't really match the statements of anyone from behind the scenes; they seem to just be chalking it up to a minor misstep. Miller and Lord cited "creative differences," while Kennedy praised them as "talented filmmakers" when their shocking departure was announced. With the fear of meeting the hot end of a lightsaber, it is unlikely that stars like #AldenEhrenreich, #DonaldGlover, and #EmiliaClarke will be able to offer much insight. However, if the reports are true, it sounds like a pretty nasty set to be on.

With this being an almost unheard of situation in Hollywood, and at the reasonably late stage of Han Solo, it's still unsure whether Miller and Lord will get any credit for the film at all. Technically, any director who comes onto the project could start again to align the film with their own ideas, or use a more Lucasfilm friendly approach; but with that costing some serious kyber crystals, whoever it is will probably salvage what they can.

With their previous films including 21 Jump Street and The Lego Movie, Miller and Lord seemed like the perfect visionaries to craft a fun and faithful origin story for one of cinema's best-known #scifi characters. However, it clearly wasn't meant to be, and now Lucasfilm will have to search the Outer Rim for a suitable replacement. With frontrunners, including Lawrence Kasdan himself or Apollo 13's Ron Howard, expect the Falcon to be ready to fly ASAP.