by Aldo Palaoro about a year ago in humanity
Report Story

A story on the value of giving love unto others. 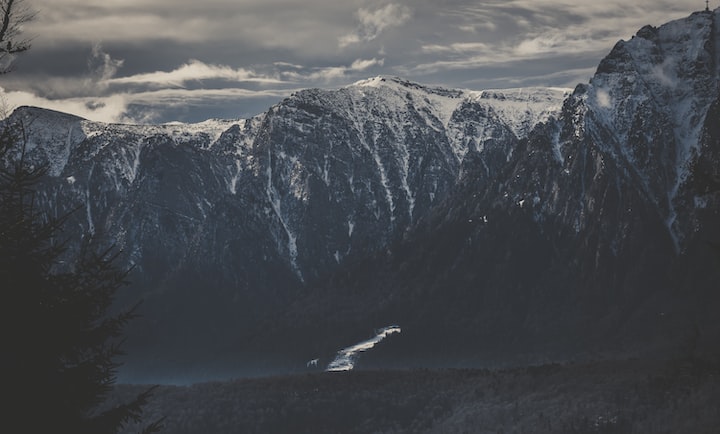 Photo by Alex Blăjan on Unsplash

Decimus’ chest heaved, his breath recouping from chase given to a hulking boar in hopes of preserving his wife and young boy in this, yet another dire Northumbrian winter. His step slowed further, the fallen snow tacitly giving way to his overly taxed boots as he squinted against the frigid wind, looking for a sign that his arrow had met its mark. It was then, upon a hearty maple trunk that Decimus caught the glint of the moon, glowing crimson in a spatter of the boar’s life-wine. Decimus turned his head high to the luminous celestial body, bold and bright among the bounty of sky-stretched stars, grateful for that which he could see but not understand.

Decimus thought back to when he was a child, when he had known the moon as his father called it, Máni, brother to the sun. Yet, as Decimus grew tall into a mighty drengr, excelling in battle so he and his Nordic kin could stake a plot of this fertile land among these Christian peoples he couldn’t help but begin to question the existence of the Gods, of the father of all men, his one eye afire. In his travels, infested by bloodied fields, he had learned of the Christian God and the fools jubilant to martyr themselves upon his sword for him, and he had seen those old Gods beloved by the ancients in towering marble displays, now crumbling into the muck at their feet where they were once worshipped.

It was from this trunk and by the moon’s glow that Decimus stalked the path of his wounded prey, its life-wine erupting onto blankets of white every fifteen or so strides, desperately winding amidst the thickening trees and bush. Decimus soon came upon heavier patches of the creature’s blood, leading into a valley dense of trees, lessening of the moon's light at Decimus' aid. As he navigated further and further into this valley, it’s nature began to form in his mind, sinister and archaic beyond his understanding. It felt of a fire moments after being smothered and rang with echoes of corpses trapped somewhere between Valhalla and Hel, if such places are true. “A dark seidr veils this valley,” Decimus said aloud as if doing so meant he would have allies at his back in this strange place.

He pushed thoughts of such things to the back of his mind, bringing forth the reason for which he had come upon such a place to begin with. At this very moment, his wife Elizabeth was likely to be finding warmth with the boy at their wooden home, surrounded by sturdy walls and a bed of tepid blankets born of animal furs. He did this for these nights, where huddled against one another he would see her retrieve the one true luxury they had been afforded in this life in the form a small, black book. In it were the stories told of a great king long ago who wielded a sword which held great powers, one he alone could pull from an anvil resting atop a stone one bleak night akin to the one Decimus finds himself in now, and of great battles fought by the King and his loyal knights. The boy's face would be filled with a bright warmth as Elizabeth spoke the words into life with her often melodramatic performance. The happiness with which these nights brought Decimus was unlike any he’d experienced elsewhere, happiness that no God of which anyone followed could bring to one man.

Soon Decimus came into a clearing, in which passing into gave sight to one of those structures, supposedly built by ancient giants, it’s entrance constructed directly into the earth at the foot of a cliff honoring some long departed Goddess, whose face remained veiled behind silk carved with unerring precision. The beasts trail led up to the stone step where it now lay, in a pool of its own gore, at the bare feet of the mysterious Goddess. Decimus closed in on the beast, swinging his bow to his back as he procured his dagger and field bag, ready to filet his kill and be off from this place which had felt of death, its air thin and light scarce. At the moment he fixed his blade to the animal's stomach, a woman’s voice, both real and inside his head suddenly spoke out to him…

“O my child, gaze upon me with reverence, behold the opulence I hold for you and your homestead. What I hold for little Acton, your boy…” Decimus froze at these words, not understanding where they came from or how this mysterious voice knew of his boy. “Come now, enter the temple of Vesta and be rewarded for your worship, for your bravery.” Decimus turned his gaze upwards to this ‘Vesta’, and to his immense shock her face no longer remained behind a veil carved of stone but was rather looking down her strong nose, her still alabaster eyes gazing in his direction. “Within my walls I hold 10 tons of silver, worship me and strike your inner demons within my walls and poor little Acton will never go hungry in any of his days in this world,” her voice spoke unfeigned.

Decimus did as this so-called Vesta said, leaving his kill behind as he traversed the large marble steps, towards a horrid darkness which enveloped her long-forgotten temple. He continued in this darkness, which seemed to be never-ending, and continued deep into the earth until, after what felt like nearly an entire hour he came to a cavernous room and within it a marble brazier adorned with silver inlets that, void of nature’s laws held a great green fire that roared with life. Decimus came to this brazier, both in disbelief and child-like wonder as to how it could be in this place.

“Gaze into my flames, O child, and see that which you have left behind and that which is ahead of you, if you give me your worship that is.” Decimus did as she said, and looked deep into this seemingly irrational flame until the flicker and dancing of green licks of fire began to put him in a calming trance. It was then, suddenly and without warning that Decimus began to fall back, deep into his mind and the tides of memory. He fell and fell until he abruptly struck the grounds of an open field, the sky dark with clouds and his father at his side. It was moments before his first battle, his father grinning at him with both immense love and pride at the strong drengr, procured of his seed, ready to wet his blade in the blood of their enemies for the first time.

“Father? You’re not real, I saw you fall in battle,” Demicus said as he began looking around at the battle to take place. Now, in a panic, he screamed “What dark seidr is this?” Vesta appeared in front of him, this time seemingly of the flesh, right as the men around him formed a shield wall to protect one another from soon-to-come volleys of arrows. “You do not wish this sort of life for little Acton, do you, my sweet Decimus?” She said through the snide smile one would think a God to give. “No, there is no honor in this taking of sons and fathers. Only horrors that leave one up into the night, bandaging scars that no other can bear witness to.” Decimus replied, anxious to leave this battlefield where it belonged, buried in despondent memories.

Just as a volley of arrows were about to find their way to the men surrounding them, Vesta shoved Decimus backward, and he was once again falling into blackness. “Good,” her words echoed as he fell. Once again, Decimus landed. This time in the market of a town, the sun belting down him. A man was on his knees pleading with the town’s Reeve, explaining through honest tears that he only meant to give his children the food for which he was caught stealing. These pleas for understanding fell on deaf ears, and once again Vesta appeared at his side. “If you were lord of this town, what would you have the Reeve do to this man? His family?” She asked.

“Why, I would fill their bellies, for no family should go with hunger. Dark times are only made worse by men divorced of their subjects' bearings in life, cold and cruel to the suffering of those who look upon them for guidance and protection,” replied Decimus fairly. “You’re wise to my principles, child.” Vesta spoke back, “you have seen the horror peasants suffer by dint of cold leaders, as you have suffered yourself perhaps.” With those words spoken, Vesta once again shoved Decimus backward into nothing.

This last time Decimus landed deep within a castle's walls, in front of a man dressed in charming robes yet void of fine jewelry pacing the front of his modest throne. “Here is your boy, not long after your passing, if you follow the principles I invoke, O child.” Vesta whispered, “a fair ruler of his subjects, both pleasant and giving. Place into him the altruistic love my name gives, give yourself to my name and his future abounds in the comfort of great riches.”

“But be warned, for if you take my silver and lead in the ways in which you were led I will send Orcus to claim that which no riches or God can replace, where Acton will only know pain and misery as you’ve known, a never-ending existence of torment. My price for failure is as steep as my rewards for love,” she finished, smiling at the Nordic man in confidence. “What is your choice, child?”

Decimus looked down, below him a mirage of his wife and boy curled up among the bed of fur, his plump cheeks red with warmth and ahead of him two paths. Both lives of servitude, one for the sheer benefit of those above him, while the other a life in which he could do good to others who, a noble may see as lesser than, he can see as being on equal footing in this life.

“I agree, loving Vesta. I will lead my son to a life of charity and care, one in which he loves others as he loves himself.” Decimus asserted after some thought, for which she waited patiently. Vesta’s lips pursed, then cracking a smile she whispered “good, now rest your eyes.”

He once again found himself in darkness, but upon opening his eyes Decimus found he was in the bed of furs, surrounded by his wife and child who had yet to wake up. Whether a vivid dream or truly an appearance by the Gods he did not know, yet in this moment he did not care. He leaned to his right, pressing his lips to the warm forehead of his young boy, and felt at peace, unknowing of the 10 tonnes of silver filling the cold cellar below their floor, and his son’s future to be full of loving devotion to others.

More stories from Aldo Palaoro and writers in Futurism and other communities.