by AlexisB about a year ago in science fiction
Report Story

It Never Came Back To Normal 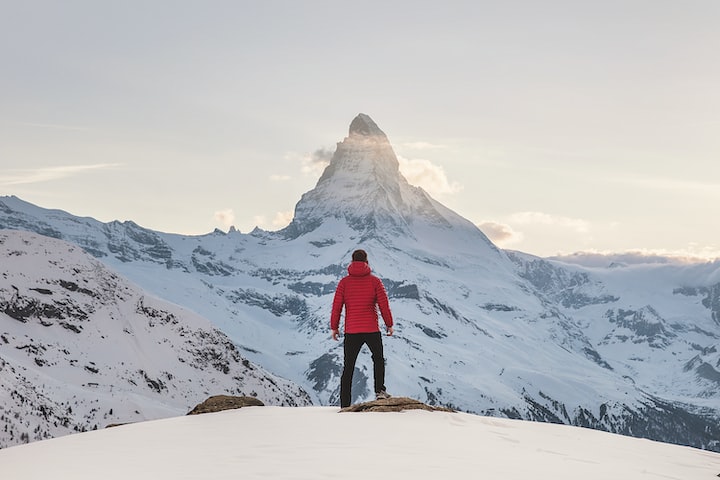 Dougal cursed. The grey thick fog enveloped him causing him to cough and use up one of his precious tissues wiping his nose.

It had seemed such a bright idea, dropping out of university to pursue his dream of ski instruction and becoming good enough to be one of those sponsored skiers who spent their life travelling the world, filmed while coasting down through endless snowfields, two plumes of bright twinkling pristine powder hanging in the sunlit air against a cloudless blue sky.

The winters failed, then the pandemic didn’t go away.

Nobody went on winter sports holidays anymore. The snow was usually soggy, heavy, unreliable and dirty, with occasional days when it turned into murky grey ice.

The ski lifts were rusting and abandoned, some through a combination of freeze and thaw had staggered drunkenly into what snowdrifts there were, the pylon bases uprooted and muddy, looking more like an abandoned industrial estate awaiting demolition.

Dougal was damp and cold, his ski jacket had split in places with his inept needlework only serving to make things worse. He’d stuffed some sheep’s wool, he’d found caught on a fence, under his jacket in a vain attempt to stay warm. He felt depressed, miserable and ill.

It had all gone downhill, but not in a way that he’d hoped for, in less than ten years. Some of the older ski professionals had shaken their heads saying that the seasons were getting shorter and the snow unreliable, but Dougal had been deaf to it all; so what if the Scottish ski season wasn’t worth bothering with? He’d got his first offer of sponsorship and that meant a trip to be filmed in Alaska.

It had been a disappointment, he thought, for all the right reasons, there was too much snow. Every road was blocked, avalanches were growling down, several other professionals had been caught out and lost, then the helicopters couldn’t take off. After six weeks stormbound, the sponsors called it off and suggested reassembling at Whistler in British Columbia. It had stopped snowing there.

A week later they were chasing the snow. An unseasonal heatwave had struck and the temperature at the base station had jumped from -3C to +15C within three days. They managed to get some shots in with one glorious run being filmed from a helicopter before the rain struck. By the beginning of April, there was no skiable snow.

His sponsors cancelled all filming for the season, the Alps were sweltering under a heatwave and conditions were dangerous as wet snow avalanches seem to dog every resort. By May a couple of alpine villages had been wiped out with almost total loss of life, as hanging glaciers gave way and chalets were either swept down into flooded valleys or buried under tons of snow that had set rock hard, defeating the best efforts of overstressed rescue teams.

That was years ago. Desperate communities trying to rescue some sort of economic future for tourism found that even summer trips had been curtailed.

Several countries had loosened travel restrictions in the hope that enough of their population had been vaccinated to make lockdowns a thing of the past, but were overwhelmed as immigration soared. Millions had faced famine as crops failed and local wars sprang up. It was no good Europe protesting that unregistered immigrants would be turned back. These refugees had nothing to lose and would try anything to leave the Hell of starving children and livestock dying in parched fields, while others had lost farmland, towns and industrial areas to an endless parade of floods.

Dougal really wasn’t interested. He was only concerned with snow. He bitched about travel restrictions, couldn’t see the point, had every dose and booster going, before staying in a bubble and getting to New Zealand before they too closed their borders.

He’d had all of two weeks skiing when a procession of storms overwhelmed the South Island and the ski areas shut down. Every non-resident was given three days to pack up and go. New versions of the virus had turned up in Asia, and New Zealand was cutting itself off. Sustainability was now the watchword. If you weren’t a farmer or someone who had a trade that could help feed the nation you had to go home. All work permits were cancelled. There was nothing they could do about it.

He had woken up with a bump when he was not allowed back into the UK. New rules had been brought in and every quarantine facility was overwhelmed. New isolation camps had sprung up like gulags around every international airport. Aircrew were refusing to man airliners as they too became vulnerable to an endless cough, temperature and lassitude. Vaccinations had mitigated the worst symptoms but in place of critical illness resulting in death within a few days, most people were now chronically ill, barely able to function, almost old before their time.

Local lockdowns had failed and by the time Europe and the United States had agreed criteria for national lockdowns and a freeze on all travel, it was too late. Five years ago it was estimated that 40% of the working population of the UK was only capable of about three days’ work at the most. Since then infrastructure was failing as critical workers tried to soldier on but with painfully slow and inadequate results.

The entertainment and tourism industries had all but disappeared as the effects began to bite. It was no longer a question of staying home and sitting it out, it was limping along in the hopes of surviving.

Initially the wealthy felt they could insulate themselves, but as basics became more and more difficult to find, it made no difference how wealthy you were, rationing was back and those who wanted to profiteer in a new Black Market soon found that they were getting too ill to care and critical supplies were too well guarded.

Dougal was out on a limb. He had no skills to offer and as one border guard told him from behind his respirator, he was useless and not worth saving.

Finally, through a combination of being flown back to mainland Europe, escaping one of their own Gulags, pinching a boat then walking, begging and foraging along the way, he’d wound up in Lapland. He still had his skis for all the good they would do him.

The ski resort had been largely abandoned. Nearby gold mines had kept going for a while and he’d managed to do some basic labouring in return for canned food but that had dried up as the demand for gold waned. Safe drinking water, fuel and food were the only priorities now for most of the world’s population. The apocalypse had happened slowly and miserably. Millions had died, not quickly and spectacularly but through malnutrition, exposure and misery as symptoms dragged on and on.

Nobody talked anymore about things going back to normal. Even the weather had it in for them. Any thoughts of reduced consumption and saving the planet were a forlorn hope. The damage had been done and now the consequences had to play out regardless of what mankind thought it could do.

Dougal hadn’t even thought about what was happening for years now. His only distraction was climbing up what had been the nursery slope, when conditions allowed and skiing down. It was his only joy in life.

There were fewer than thirty people living in the area. A couple of the wind generators worked and solar kicked in whenever the sun shone, which wasn’t often. Esko, a former soldier had worked out how to charge batteries from what was available as light in the dark winter nights was a priority. Heating was usually a question of wrapping up warm.

Fishing had become a necessity. He no longer tried ice fishing as two of his mates had gone under when the ice had given way.

Instead, he fished the river that hadn’t frozen for years now. The number of grayling and arctic char had boomed as conditions favoured them and Dougal husbanded his resources. He still had plenty of line and three serviceable reels along with five rods left by his mates who’d drowned.

Lures were a problem until he’d found an empty souvenir shop with a display of blue enamelled heart-shaped lockets in various sizes. With a bit of experimentation, he’d turned them into quite effective spinners. They looked small and twinkling being fished in the back eddies and pools where he hoped they wouldn’t encounter a pike. They were usually found in the lakes and would make short work of biting through his line.

So far he’d been lucky, trading char with an old Sami herdsman who smoked them for three days over slowly burning birch and juniper while he foraged for mushrooms and berries which had become the local currency of note. It was a good arrangement.

Yesterday the old man had introduced his granddaughter who’d arrived from somewhere pulling a sledge laden with soap, cough medicine, nasal spray and joy of joys, tissues. She had been generous but firm. She didn’t seek to trade but gave priority to the four women who had children and said she’d give to the others as and when they needed. Stockpiling was forbidden. Surprisingly, nobody objected.

The girl’s name was Ella. She was, unlike her grandfather, fair-haired with green eyes. She accompanied Dougal on a couple of his fishing trips and was very amused by his heart-shaped locket lures.

“Let me wear one, it’ll bring you luck!”

Her English was good, if slightly accented. Dougal appraised her. She was pretty, good-humoured with a ready smile.

He looked at his spare lures, he had only six left. For the first time in a long time, he took a risk and made a gesture born of goodwill rater than self-indulgence or survival.

He groped around in his pocket and took out one of the silver chains that lurked there. To his surprise, one of the smallest sized blue hearts was still attached. He couldn’t think why he hadn’t already cannibalised it for fishing.

“Here take it and don’t worry about bringing me luck.”

She took her furry hat off and bowed her head forward for Dougal to fasten the clasp around the back of her neck. She looked up then kissed him on the cheek.

Dougal just grinned, then to cover his feeling of embarrassment, he picked up his rod and continued to reel in. To his relief, the lure hadn’t snagged. Suddenly there was an almighty pull that nearly had him in the rushing river. He felt arms around him as he fought to bring the fish under control then with a big jump a large salmon leapt out of the water and lay stranded behind some rocks a few yards down with a blue pendant firmly attached in the scissors of its jaw It must have weighed at least ten kilos.

He looked back at Ella and kissed her on the forehead just as the sun came out for the first time in weeks.

Dougal’s nose had stopped running and he felt better, maybe there was a future of some sort out there after all.

More stories from AlexisB and writers in Futurism and other communities.