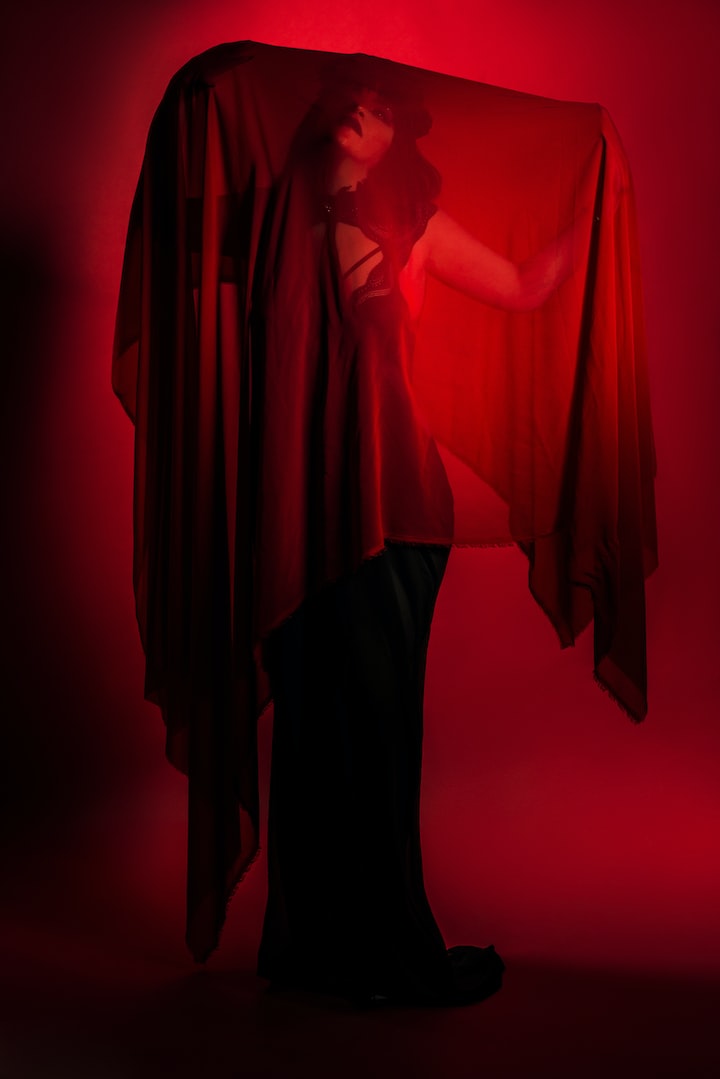 Photo by Lua Valentia on Unsplash

His eyes scanned over her with an intensity that Natalya had never before seen, a rising need with a flicker of carnality that radiated from his eyes like a brightly lit flame. It licked and arced from his pupil, with an arrow’s piercing aim directed at her.

“Your eyes give away many secrets,” Natalya’s lips flickered, her voice enticing and sultry as she regarded him closely.

“There’s much to weigh on, Mistress,” he confessed, slowly walking closer, a sway to his hips that Natalya perceived as an invitation to measure his sculpted body as he drew nearer. Only inches away now, Natalya tilted her head, slipping her tongue free of her lips as her nimble fingers slid the hood from her face. He grinned, his eyes still emanating the uncanny desire that he had to capture the prey before him. Indeed, Natalya embodied the beautiful power so many lusted after but she knew upon looking at Maric that something else resided just beneath the surface. He slipped his hand up beneath her chin, tender strokes bringing her lips just an inch from his own, “I dare not touch what is not invited, volva, but in you I do not see any need to deny my request.” Hesitating, Maric’s lips twisted as he too slid his tongue from it’s containing, dragging it slowly across his lower lip in an anguished expression, as if he had been denied too long what he knew only Natalya could provide him. And still, never having touched male flesh, the volva was uncertain. Her movements dictated only by instincts long written into her core that she could neither deny nor fully comprehend.

“You pledged your loyalty and your blade, Maric. Would you also pledge your heart? Knowing I could soften it with a molding of my hand?” Natalya asked, as a shiver of nervousness ran down her spine. She dare not show it, knowing full well Maric couldn’t harm her by any means save to break her gullible young heart.

“Mistress, love comes when yet we least expect. Your heart be cherished for the time endured, I will be here for you until Ragnarok’s dawning; if only to serve your cause but if the organ beating in my chest is optioned, the humble thing I have to offer you, then indeed I would hold it for its worth,”

His words came out in a whisper as his eyes bore into hers and Natalya felt the softening of her soul a need for consummation arising higher with each moment as he drew nearer to her. Her fingers slid from the hood, and instantly met with Maric’s, slipping through his hair as she pulled his lips closer to hers. He found her with a hurriedness he hadn’t expected, his hands slipping to grasp her hips as he lifted her from the ground. Hungry kisses fell to hers and his tongue seemed to develop a mind of its own, snaking between her lips to toy with hers as he explored the roof of her mouth. Natalya could feel her heart beat faster, pounding into her chest intensely as Maric’s lips pushed the air from her lungs. Breathless, and light-headed, Natalya fell into his chest, her hands slipping down his shoulders to fan out across his chest. Finally, unable to contain it any longer, she broke free of the kiss, gasping for air as she looked over him. Maric’s eyes radiated intensely, “Grant me my wish, volva and I will show you pleasure unlike any before known.” An animalistic hunger still emanated from him and Natalya knew this was the man she wanted to belong to, now more than ever before. Stepping back, her fingers lifted from him, each pulling at the knots on her cloak as she allowed it to drift away from her body. Hands slid further still to her bodice and corset, untying them slowly as she stared back at Maric. Now, fully naked, Natalya allowed her hands to fall to her sides and grinned as Maric bowed before her.

“Worship your mistress then, warrior,” parting her silken thighs slightly Natalya slid her finger down to the folds of her cunny, index finger slaying her lips apart in invitation. Strawberry blonde locks cascading down over her alabaster flesh seemed to frame her brilliant eyes in a way that drew the very breath from Maric’s lips and he gasped in awe of the beautiful goddess baring herself to him. Crawling upon his knees, Maric lifted Natalya’s leg and gently draped it over his shoulder, his breath fanning out over her cunt as he gazed up at her, “You’re beautiful, mistress. Shall I eat of the fruit of your loins?” He asked in a cocky and amused tone, his tongue dashing out to flick over the nub of her body in a teasing manner. A soft moan slid from Natalya’s lips, her body shivering in slight as she stood in place. Maric grinned and slipping his index finger upward he dipped it gently into the virginal hole of his mistress’ tight and untouched body, “Relax, my mistress, I will ensure you are well slickened before I plunge you from within,” he chuckled...