by Dreadful.herbalist 2 months ago in taboo
Report Story

Short Tales from a Kink Closet 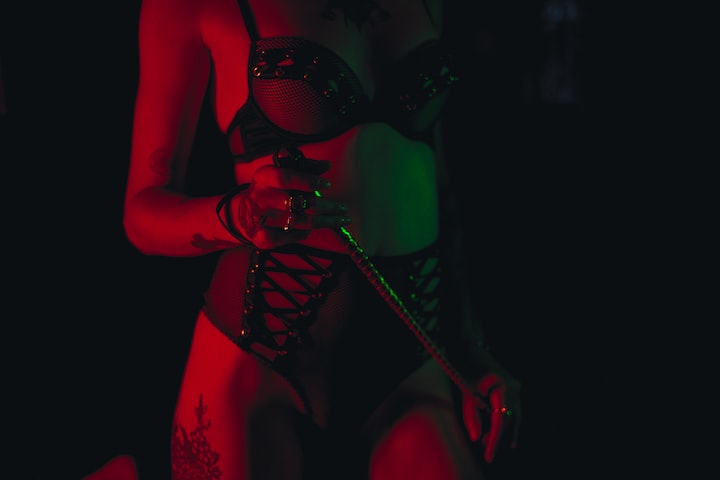 Photo by Maria Vlasova on Unsplash

The day was ordinary in the most mind numbing way. I had completed my chores and was working on dinner when I heard the door open. I was in my full uniform; form fitting, assless yoga pants, thong underwear, collar and exposed chest. My heart raced at the thought of being with my Mistress again when I heard the other voice. A deep voice. A man. My heart caught in my throat at the unknown intrusion. Who was he? Where did he come from? Why Was He Here? How dare he invade our sanctuary? My anger rose dramatically until I heard laughing. A shared laugh at a shared joke. I knew Mistress had a life outside of the house that I wasn't fully privy to but this!? I slowly crept to the corner, desperately trying to see without being seen. I wasn't exactly sure how I felt about him either. He was sort of handsome in a boyish way; blonde hair cut long on top but matched his shirt cropped beard on the sides and back. His business shirt suggested that he and Mistress worked together. His dress pants and his shoes shined mirror only black confirmed it. Mistress was talking with him and caught me looking at them out of the corner of her eye and gently touched him on the chest. A familiar gesture, done many times before. My heart thundered in my chest but I slunk back to the stove, mind reeling from the revelations and possibilities.

I set the table for two, my defiance of the situation without stepping out enough to warrant punishment. I served dinner and called Mistress to eat. They both came to the table and after Mistress surveyed the layout, I knew my mistake. The fury in her eyes could kill and the anger was palpable in the air. Mistress took her place at the head of the table and the man was told to sit at my seat. I started to protest but I was cut off, commanded to serve the food. I did so then stood back, waiting for my next orders. I was told to get under the table and serve Mistress. I kneeled before her and leaned in but hesitated. When asked why I spread her open and started licking. I left no crevice dry but focused on the clit and opening. Mistress and the stranger continued talking the entire meal while I served my Mistress without stopping.

When they were full I was told to clean up the meal. Downtrodden, I started to when Mistress told me to eat quickly as well. I ate the scraps of the meal and cleaned the dining room as they retired to the living room. When I finished I joined them but as I entered the room my heart dropped. They were kissing. No not kissing; more than that, deeper than that. Stunned, I stood there numb until Mistress noticed and bade me join them. I sat at her feet but it was difficult, listening to them enjoy making out. Then, I heard the sound I was dreading. First a belt coming undone followed by a zipper. Mistress wasn't wearing either. Then his pants were at his ankles followed quickly by his boxer briefs. I snuck a peek at him and it was big. I think. But Mistress was sucking it. Why? What hold did this stranger have over her that she serviced him?

I was called up and told to continue licking Mistress. I did so but my mind couldn't stop spiraling. Then she climbed on facing him, his hardness sliding easily inside my Mistress. He moaned and she bounced enthusiastically, head thrown back in ecstatic abandon. And I could just watch, my own sex aching at the lack of use.

Then it happened. I knew it would. I can read all the signs by now but I hoped and prayed he would fall short. Mistress bounced with a purpose now. Her breath quickened. Her thighs began shaking. Her eyes locked with his. Then she released. Moaning like I had never heard from her before, she came all over his tool. I saw her shake again and again as orgasms rippled through her entire body before she collapsed onto him in orgasmic exhaustion. And I whimpered pathetically knowing that I could never do that to my Mistress on my own.

Hearing me, Mistress looked up in shock, surprised I was still there. Mistress climbed off the stranger and ordered me to clean him. I looked at her eyes, searching for the hint of humor telling me this was a joke. A bad joke but a joke nonetheless. There was none. This was an order. I knelt before the stranger and traced my tongue slowly over him before engulfing it. I bobbed up and down, his tool going deeper in my mouth each time. When I was most of the way down, Mistress pushed the back of my head forcing the stranger all of the way in my mouth. She held me there, my head trying desperately to force her off and give me air. After what seemed like an eternity she let me up and I gasped, cool air flooding my aching lungs. She laughed at my reaction then straddled the stranger facing me. She lowered herself onto him and now there was no doubt in my mind; I saw in her eyes she loved it up there.

She bounced enthusiastically again and I sat there, watching my Mistress enjoy herself without me. She pulled my head to her clit and I licked as well as I could but it was difficult. Mistress orgasmed more times than I could count. Then I noticed something else happening. I think? Maybe? Did his breathing quicken? Was the skin on his ball that tight before? No. Definitely not. He's preparing to orgasm. In her. My Mistress. HOW DARE HE!? She's mine. He can't pollute her like this. My thoughts raced again. How can I prevent this? I have to stop him.

But as usual Mistress knew my thoughts. She slipped off of him but continued rubbing his hardness. I panicked, thinking she would force me onto him again as he released his seed. But I wasn't. Just as I looked at Mistress, pleading with my eyes to not be forced into it, the stranger released, his hot sticky seed pulsing onto my face. Then without waiting for him to stop, Mistress cleaned him herself. Why? Who was this stranger in my house? I would never find out.

I asked Mistress for my own release, my sex throbbing from lack of attention and dripping in anticipation. I was told to clean myself up and wait for Mistress in the bedroom; she would use me herself. I ran to the bathroom to clean his seed off of me and prepared myself for my Mistress. But that's a story for another time.

Wisdom is only found by those that learn.