The Juice Runs Sweet Down Your Chin

by Raistlin Allen 5 months ago in literature

"Danger hides in beauty and beauty in danger." - Belva Plain 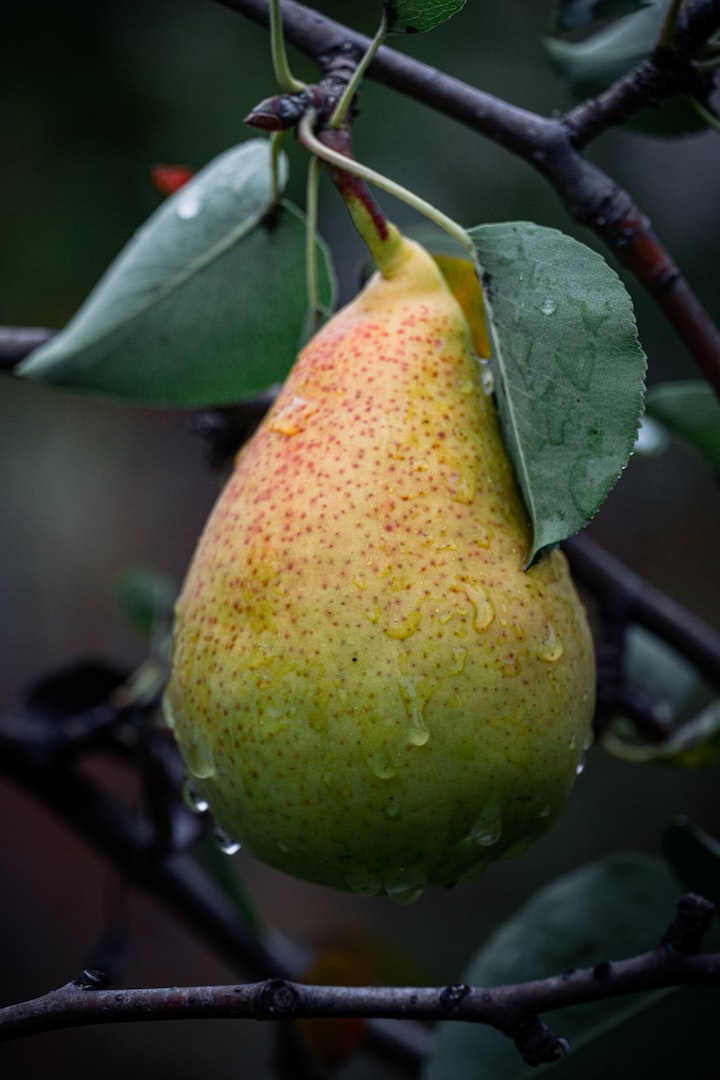 Photo by Vitya Lapatey on Unsplash

Desiree met Patrick in the usual place: the club on the corner of First and Main was always bursting with patrons. He was knocking back a fireball shot and laughing loud and raucous at something the man next to him said. Desiree, wearing a short red skirt that complimented her dusky brown skin, licked the sugar on the rim of her cup and eyed him.

In answer, Desiree parted with the wall they were leaning on, hooking her bag over her shoulder, and approached him.

She knew Patrick’s eyes were on her before she’d finished closing the distance between them. She could feel them, like a heat trap, beckoning her onward like twin dark flames. He was not conventionally attractive: he was short, about her own height when she wore heels, and stocky, muscular tending to fat. His wiry black beard was pointed like that of a devil in a cartoon. But there was definitely something about him, that certain magnetism she couldn’t describe but could only feel. An aura of sheer sex, riding the blade of danger.

“Hi,” she said when she reached him, making her voice small and breathy. His dark eyes twitched over her body, and she waited, hip cocked, for him to make his assessment.

“Hey, baby,” Patrick responded. He wasn’t shy at all, didn’t even appear surprised by her presence. His lips quirked upwards in a cocky smile and the guy next to him ribbed him playfully. “What say you and me get to know one another?”

Desiree stole a half-glance back at Jennica, who only shook her head. She was probably thinking they were going to be stuck here, Jennica with her safe life and her fussy two-year-old and compliant boyfriend. They’d discussed this: it was a girl’s night. They weren’t here for men.

“One sec,” she said, going to her phone. As she was looking down, she thought she saw a flash of anger run across his face. He didn’t like to be ignored, not for one second. This Desi would soon learn.

She smiled a little at what she imagined to be her friend’s prudish outrage, her concern. The answering buzz of Jennica’s text came back almost immediately, but she was already sliding her phone back into her little black clutch.

She looked straight into the dark eyes of the man before her, and felt a pleasant chill seep through her body.

When Desiree turned sixteen, her grandmother gifted her with an orchard. As Desiree’s mother put it, it was more a glorified mass of brambles than a legitimate orchard, but Desi was enchanted all the same.

Her grandmother led her across the overgrown lawn behind her trailer into a gathering of bushes and weeds. They hacked through for a solid minute before Gramma straightened up and turned to look at her. “See?” she asked.

Desi did see. Her mother was right in that it wasn’t really an orchard so much as a few pear trees standing yards apart in a clearing.

“Cool,” she said, more just for something to say than because it was.

“I want you to watch over it when I’m gone,” Gramma said, then, as if she hadn’t just casually mentioned her own death, “Here, this tree is my favorite. The fruit is always the sweetest. I think the sun hits it just right. Try.”

She offered the pear to Desi, who took it but didn’t take a bite.

“Gramma? What’s this about you not being around?”

Gramma waved a hand. “Oh, you know, Desi girl. Things happen. I don’t know if you noticed, but I’m old.”

Desi felt a lump in her throat. Of course she knew but she didn’t want to think about a life without her grandmother, had avoided thinking about it ever since she was nine and Gramma had her first cancer scare. Her father had up and left a long time ago: all Desiree had to remember him by was the sound of shouting and of doors slamming, her mother trying to cry quiet.

Her relationship with her mother was a little strained; since her father left, it seemed like she was always working. It was Desi’s grandmother who’d come over to watch her, her Gramma who would tell her stories and entertain her. Not only that, but her grandmother seemed to understand her like her mother never did. When Desi got in trouble at school for fighting it was Gramma who’d come and bail her out. Her mother seemed almost frightened by this behavior in her, but Gramma would tip her a wink in the back of the car.

“We’re the same,” she told Desiree once. “We’ve got hot blood. We’re restless. You just need to channel it is all.”

Desi looked down at the pear in her hand; there was a slight give in the skin coating its ripe flesh.

“Did the doctors say something to you?” she asked, but her Gramma moved on as if she hadn’t spoken, talking about another of her trees like it was human. She’d always been a bit of a nut about nature.

“No.” Her grandmother took her hands, suddenly very serious. “Desi, trees are more like people than you think. Not all trees are the same. Just stop your worrying and let me show you.”

Desiree bit the pear in her hand, and despite her sudden worry, she had to admit it was good, better than any fruit she’d had before. Her teeth tore through its subtly grainy meat, releasing almost more juice than her mouth could contain. She had to wipe some of it away as it overflowed her mouth and ran sweetly down her chin.

Patrick fucked her hard and fast and often, like she was a series of small jobs he just needed to get done. He was as strong as he looked, and sometimes, when she was face down on the pillows he’d grab her hair and yank it back, whisper things in her ear like aren’t you a dirty little slut and that’s a good little whore. He was strong despite his disappointing stature; his hands would leave bruising on her hips the next morning. His favorite thing was to hold her down and choke her until she begged, at which point he’d become more heated, thrusting into her evermore furiously.

Desiree knew if Jennica could see her now, she’d have some choice words to say. She’d always disapproved of the men Desi brought home, didn’t understand why she wouldn’t just hook a nice guy like Jason, her pliable and extremely boring boyfriend. There were some things Desiree just couldn’t make her friend understand, and the very least of these was the electric surge that went through her body when a man’s eyes flashed, when he went to pin her to the wall. The excitement that filled her when his fist connected with her jaw.

Now she was lying on her side in bed, waiting for Patrick to come back from the bathroom. Her throat felt swollen and burnt when she swallowed. Desiree reached for a glass of water, but it had been knocked from the bedside table where she put it. Instead, her fingers brushed the cracked leather of Patrick’s wallet.

Her eyes went to the door, where she could hear the sound of him pissing. His dick was on the small end of average, and a little bent. When she was assured he wasn’t coming out for a bit longer, she opened the wallet and thumbed idly through it. Nothing too surprising. $20 cash, a condom that looked like it had been along for the ride for years without being bothered with. A couple of scratched-up credit cards, a picture. She worked this out of the bottommost slot and stared at it. A young girl, maybe 13. A daughter? No, someone else. Desiree herself was only 19 but she looked younger, though Patrick hadn’t bothered to ask for ID. His license revealed that he was 39. Not the oldest guy she’d had, but approaching it.

When Patrick came back to the bedroom, Desiree had rolled onto her side. She dropped her eyelids to half-mast, sexily.

“There’s somewhere we should go,” she said.

“Maybe later,” he said, grabbing her impatiently and squeezing one of her breasts. His stomach rumbled.

He let go. “Shit, me too actually. You got anything here?”

Dawn stained the sky like the pink traces of blood on a white smock as she led him across the grass to the thicket.

“Where the hell are we going?” he asked, shivering a bit in his wifebeater top.

“You’ll see.” She took the last couple pins from her hair and dropped them to the earth as she went, shaking it out.

A second later they stood in the small circle of trees, the aroma of ripe fruit surrounding them.

Desi crossed to the smallest of the trees, plucking the juiciest of its members from its boughs. She held it out to him, biting her bottom lip just so.

“Oh you little minx, you really know how to get me hard,” Patrick growled, face changing from irritation to arousal in two seconds flat. His smile was like a wolf’s, and Desiree felt the now tender space between her legs grow hot.

He pushed her up against the tree behind them; the rough bark cut into her back as he bit into the fruit, still held aloft in her hand.

It happened almost instantly. Patrick’s body stiffened, seizing up. His mouth, descending to bite her neck, opened like a faulty gate, one sticky-sweet strand of saliva crawling out. He looked on the edge of a furious speech he’d forgotten the words to.

Desiree extricated herself from underneath Patrick, dropping the fruit as he began to shake. He fell like a stone, lustful little bull eyes rolling back in his head. She waited one, two, three seconds, then three more. His chest jerked and then he went still.

This was the thing Jennica wouldn’t understand most of all, the thing she couldn’t say. How the excitement and arousal all built up to one fine point, how it was easy to finish herself off almost lazily, standing there and shivering in pleasure in the early morning light.

Her mother wouldn’t get it either. The only one who would have understood died three years ago, shortly after gifting her this place.

We have hot blood. You just need to channel it is all.

After, Desi stood a full moment looking at Patrick’s prone form in the dewy grass. She thought of the underage girl in his wallet. She imagined her safe at home even though she knew right now her small body was probably out in the woods somewhere decomposing. All the other men- her mother’s ex-boyfriend Sam, her cousin’s gym teacher, a number of violent dates- men who spread poison wherever they went- they stared up from under the ground with blank eyes at this latest addition to their company.

Trees are more like people than you think. Not all trees are the same.

That day that had changed her life, her grandmother had showed her exactly what she meant. She went to the smallest of the trees, a pretty young thing, and pressed her hand against its bark, where Desiree could see the smallest of black stains.

Some of them bite back, she told her.

The pear had fallen a short distance from his sightless eyes, and as she watched, a fly alighted on it, drawn to its sweetness. It walked around in the indent left by Patrick’s mouth until its body and wings stilled for good.

Read next: My Initiation into The Lifestyle