by Jupiter Grant 2 months ago in fiction

It keeps me awake at night, and distracts me from my work during the day 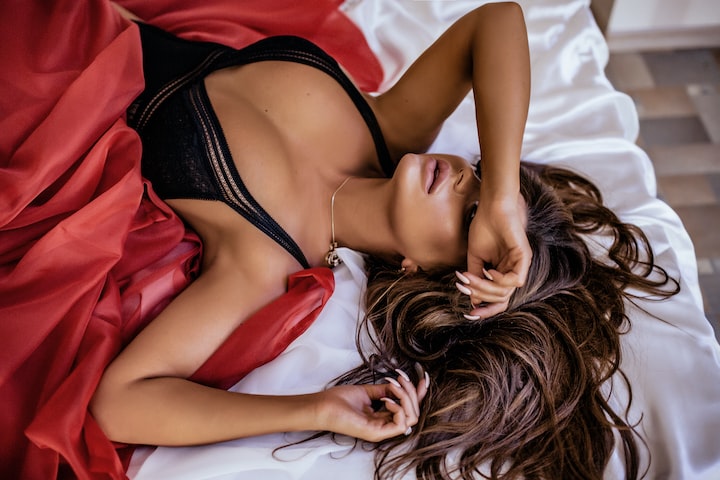 Photo by Vitaly Nikolenko on Unsplash

I want him. I want him so much. He’s absolutely gorgeous. From the second I first laid eyes on him, I have fantasized about him. Imagined what his kiss would feel like, the sensation of his hand cupping my chin as he lowers his face to mine and presses his lips to my mouth. Imagined how his tongue would feel as he uses it to gently part my lips, coaxing mine with languorous swirling and sliding movements. I’ve dreamed about his hands pressing me against him, at the waist at first, then down to my hips, before cupping my bottom as he nudges his growing erection against my groin. The sweet, delicious pleasure of his fingers unzipping my skirt and easing it down my legs, before returning to my panties and creeping their way under my waistband.

I’ve sat in countless Tube carriages, a damp drizzling wetness seeping into my knickers as I’ve thought about him licking and sucking on my nipples, nipping and biting and flicking them into hard, rosy peaks while his fingers slip down, down, down inside my underwear and find the quivering nub of my clit. In the fantasy, he winds slow, torturous circles around it before he ventures further, a digit slipping over my folds before teasing it in between the damp, pink lips of my pussy. By the time he’s finally removed my panties and laid me back onto the bed, my cunt has become such a bubbling volcano of hot, wet need that his thick cock slides into me with a gloriously obscene slurp.

Oh, the heaven! The sheer, pulsating pleasure I get from picturing him above me, his beautiful face flushed and contorted with desire, his eyes heavy-lidded with lust. It’s like a hunger, an all-consuming need to devour him, and to be devoured by him. It keeps me awake at night, and distracts me from my work during the day. The deep longing in the pit of my belly is like the pangs of hunger you get in the first few weeks of starting a new diet; a groaning, empty sense of starvation that makes you salivate. Unfortunate for me, then, that it’s a hunger that I can never hope to properly satisfy.

It’s awkward, you see, and I don’t like having to admit it in case I come across as some crazed erotomaniac, or a foolish teenage girl. I would hate anyone to mistake me for a stalker, or a deluded fantasist (though I guess I have to willingly concede that I’m certainly the latter). I don’t know what precisely it is that inspired such a ravenous yearning in me, or why him in particular. I just know that it consumes my every waking moment and colors the entire fevered expanse of my dream landscape.

I first saw him in a movie, about seven years ago. I’m not going to tell you which movie it was, because then you’ll know exactly who I’m talking about and I can do without the further embarrassment, thanks very much. He was, at the time, the hot new star of the silver screen, with chiseled good looks, dreamy blue eyes and the coolest hair this side of Hugh Grant in peak Bridget Jones’ Diary mode, or Harry Styles with his curly One Direction-era tresses. There was a scene in the film where he took off his shirt and revealed a toned, tanned torso; I swear that I wore out the pause button on my remote when the DVD came out.

I can really make a night of a masturbation session. I know just how to seduce myself, believe me. A glass of wine, a bit of Chris Issac on the stereo, maybe even a long soak in a bubble bath if I’m planning a “special event” kind of she-bop, and I am raring to go. I take my time to build the pleasure, caressing my skin lightly, making goosebumps arise all over my flesh and my areolas start to tingle. In my mind, my fingers become his, and I hear him murmuring in my ear, “Hmmm, perfect. You’re so beautiful, baby.”

My/his fingers dance over my belly, circling my navel, stroking my hip until I giggle; I’m a little ticklish there, you see. He knows it, too, and takes a moment to torture me with teasingly feather-light touches. ‘Our’ hands then move up to cup my breasts, kneading them gently, thumbs glancing over the taut and tingling nipples, making lazy circles around their peaks before drawing them upward between thumb and forefinger with a firm pinch that makes my eyes flutter closed and my mouth start to water.

While one nipple then gets rubbed and pinched with one hand, the other slides down my body, towards my mound. Delicate strokes of my pubic hair, with an occasional tug follow, making the ache in my lower abdomen thrum and throb and a slow stream of liquid arousal trickle from between my labia. A finger, slow and sinuous, parts my folds and brushes against my clitoris; up and down, up and down, in a hypnotic rhythm. Not too heavy, not yet, just stoking my hunger with his gossamer touch. I feel my clit swelling with each sweep of his digit, each blissful brush of his hand over my nipple.

Once my hips start to rock back and forth, his hand moves lower and he teases my opening with languid dexterity, slicking his finger with the fluid that is now seeping like a torrent from between the humid lips.

Feeling how wet and ready I am, he slips his finger inside me and makes steady circles with it. With each rotation, he brushes my inner walls, spreading my own glossy fluid all around the depths of my desperate and famished cunt. A second finger joins the first, and scissors within me, the palm of his hand now pressed lightly against my engorged button. With every movement of his fingers in my pussy, his palm grinds over my clit and my juices coat his hand.

I might allow myself an orgasm at this point, depending on how the mood takes me, but more often than not, I reach for my dildo. I’m so wet that I don’t even need any lube. I just run the toy up and down my slit, dousing it with my own moisture before sliding it between my sopping lips and up inside my cunt. And then, it’s him again, his thick, hard cock probing me with deep strokes. In and out he moves, his tip rubbing the front wall of my pussy with each heavy thrust. He’ll usually grunt around now, as my inner muscles clench and close around his prick; I only have to imagine the gruff sound of it and my nipples automatically pucker into hard little pebbles.

My cunt tightens, and pulsates with an unrelenting hammer thud of ecstasy. I arch my back, my breasts reaching toward the ceiling as the sweet fizz of my orgasm washes over me, starting deep in my cervix and radiating outward across my entire body, like arcs of electricity or frothy spumes of effervescent bubbles. Sometimes I get so carried away, I even shout his name out loud as I climax over and over, his voice in my head and his face in vivid technicolor behind my closed eyes.

When my multiple climaxes start to subside, but I know I’ve still got one more in me, I imagine him coming with me, the two of us finishing together as our bodies meld into one sweaty, sobbing mass of flesh. I imagine him moaning my name and giving a final throaty cry before impaling me with his cock and grunting out a rich, deep orgasm that makes him fall against me, panting. When it’s over, I imagine him looking deep into my eyes, his lashes dewy with perspiration, the tendrils of hair around his face and neckline wet from his exertions, and telling me that he’s never experienced anything so addictive or so paradisiacal as my beautiful pussy. And, all alone on my bed, with my body shaking and my eyes squeezed shut in my fantasy state, I smile and drift off into a contented sleep. For a little while at least. Maybe a couple of hours. Until the hunger starts building again and my insatiable want for him returns.

The cycle is relentless, and repeats over and over, just like the menu screen on the DVD I watch every night just to be able to look at him again and replay the scenes of our torrid pretend-love-making. I don’t even take in the film anymore. I don’t need to; I know it off by heart. I’ve memorized every gesture he makes, every expression on his perfect face, every fluid movement of his mouth-wateringly beautiful body. I know every line of dialogue; in fact I use it to construct all the sounds and sentences I imagine him using while he fucks me. I simply stare at the flickering screen in a catatonic daze, feeling the needful throbbing deep in my sex as my cunt oozes its slick juices and the ravenous hunger overtakes me yet again.

Enjoyed the erotica? Please send me a tip below so I can keep writing.

Receive stories by Jupiter Grant in your feed
Jupiter Grant
Read next: A Night at the Theatre