The Cuckqueen and the Friend

by Zeddicus Zane 3 months ago in fiction
Report Story 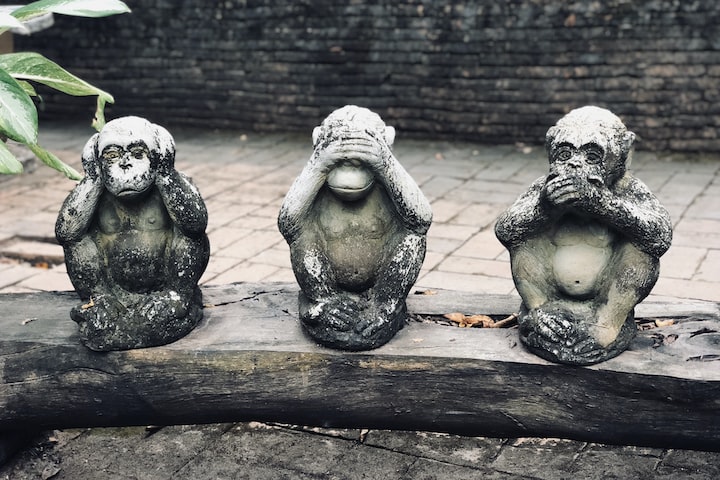 Photo by Joao Tzanno on Unsplash

There was a trickster of a woman

Who decided to test her man

One day she slipped him a hint

Open relations and get bent

But quite skeptical was her man

The battle of the wits had begun

The man decided to have some fun

He slipped on a really nice shirt

And pretended to request a skirt

By fake calling a female someone

"Really? Its only been a day" she said

He replied "Yes, but shes a hot pre-med"

Just as she thought, he wasn't true

But she decided to see the test through

Feeling all alone, she went to bed

Was he loyal or a heartless cheat

Would he rather beat his meat

Or fuck her roughly from behind

Morning came and things got heated

The man said that he had not cheated

But the other woman wanted to meet

The story changed and must be discreet

That night the couple was thus greeted

When she opened the front door

She loudly screamed "You whore!".

Staring back at her was her bestie

This story just got hella messy

Devastated, she need to know more.

"He really doesn’t want to cause pain

But he saw through your little test

And through me, his plan was expressed

"you cant blame him for your feign"

After a quite a few hours they mad up

Then the woman asked for another cup

While her man was walking away

She leaned to her friend to say

"Actually, I kinda want to you two to fuck"

Smiling at her, she said "At last!"

I thought that you would never ask!"

"But I want to watch you pleasure him"

She said with cackle and very evil grin

"I think this is going to be a blast"

With her hands tied to the headboard

Her friends shirt and skirt were floored

She could only watch them softly touch

His neck kisses she liked very very much

She watched him lick her body downward

Her friend's panties were slowly removed

Her bald pussy he very much approved

It became quite clear that he was excused

Her friend moaned as he ate her cunt

The pussy was as wet as an oceanfront

The feels made both of her legs tremor

So she reached down for his big member

But, instead, he picker her up with a grunt

Next to his bound girlfriend he laid her

So girlfriend could feel her friend purr

But he had an devilish little side plan

Girlfriend was feathered by her man

After teasing his girlfriend, he returned

For the friend's orgasm to be earned

Her friend climbed on top of his dick

As friend finishes, she slowly slides off

And motions to the ropes as to doff

He unties and the ropes begin to remiss

And her friend leans to give her a kiss

And proceeds to take her lingerie off

As the two women enjoy the kissing

Girlfriend feels what she was missing

Then slaps it with his long, fat, man pole

As he slides in, girlfriend starts blissing

The other one kisses and squeezes her tits

While her asshole his dick slowly splits

But multiple orgasms were delivered

An orgasm every time his dick deeply hits