Before guests arrive the fun begins 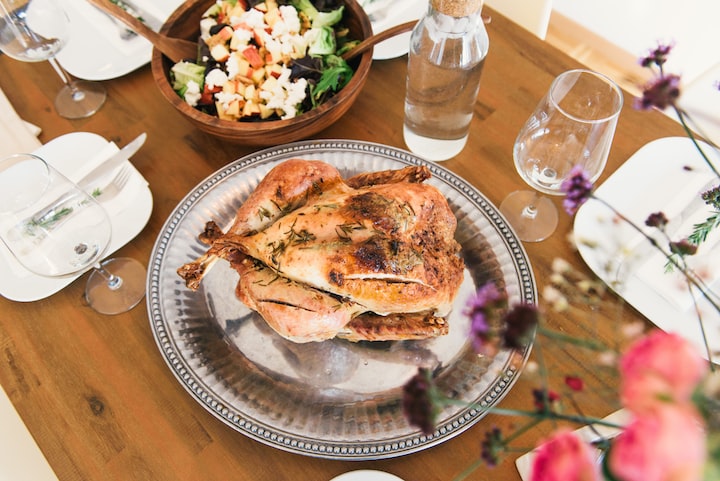 It was Thanksgiving afternoon and Ron was watching the football game and his wife Liz came back with a few things from the store. "Is the turkey almost done?" she asked him. "Almost. I set the timer a while ago. Ron replied. The timer went off and Ron quickly ran into the kitchen to take the turkey out of the oven. He put the turkey in the center of the dining room table with the other food. Ron then felt a little shaky and he went to get some water before going back to the living room to watch the game. Once he had sat down in his chair he felt his body still shaking and he did not know why. maybe because he is inviting several relatives over and facing the holiday blues. Usually in between the game he would be jerking off but he felt like he did not have the time to do so. He saw the half time show on and he was about to sleep off the shaking in his body. "Ron come in here", Liz shouted from the dining room. Ron quickly went into the kitchen to see what she had called him in for. When he enters the dining room he sees Liz standing in front of the already set table while in a long black dress. the guesses won't be here for another hour she said to him. He looked confused at first then he realized what she meant. oh you mean now he asked. yup. she replied. They kissed each other while leaning close to the table but Liz looked over twice so she did not get any food on her dress. She slowly lifts her dress up and slips her red panties off and lets them fall on the floor. Ron then unbuckled his black dress pants and pulled his large veiny erection from the front hole of his gray boxers. He then held onto Liz's left long muscular leg and inserted inside her hairy pussy. He started thrusted inside her back and forth while banging against the table. They were looking at the table and making sure the food was not messed up. so they moved a few inches from the table and he continued thrusting. Liz then turns around and lifts her dress up again showing her curvy ass and then Ron inserts his erection inside. He starts thrusting while close to the table this time. He was feeling his stiff cock getting hard and he was looking at the food. Liz felt her thick thighs shaking and felt that he was going to cum inside right in the corner of the dining room. They figured since the food was going to get cold and the guests were arriving sooner than they thought Ron realized that he had to cum quickly. and he did come inside her with both of them panting. "That was great. Let's clean up." Liz said as she was smiling at ron. Nothing better than stuffing a big fat turkey like hers on Thanksgiving. Her smile made him feel so good dealing with the stress and holiday blues. they had cleaned themselves up, liz had put her panties back on and Ron was fixing his pants. Liz quickly grabbed a spoonful of stuffing and ate it as the rush made her hungry. the doorbell rang. They knew the guests who had arrived early like they thought they would. While going to open the door for the family members, Ron sees that his team is winning. Ron, Liz and the dinner guests all sat at the table and said what they were grateful for. Ron needed more of this grace as always.