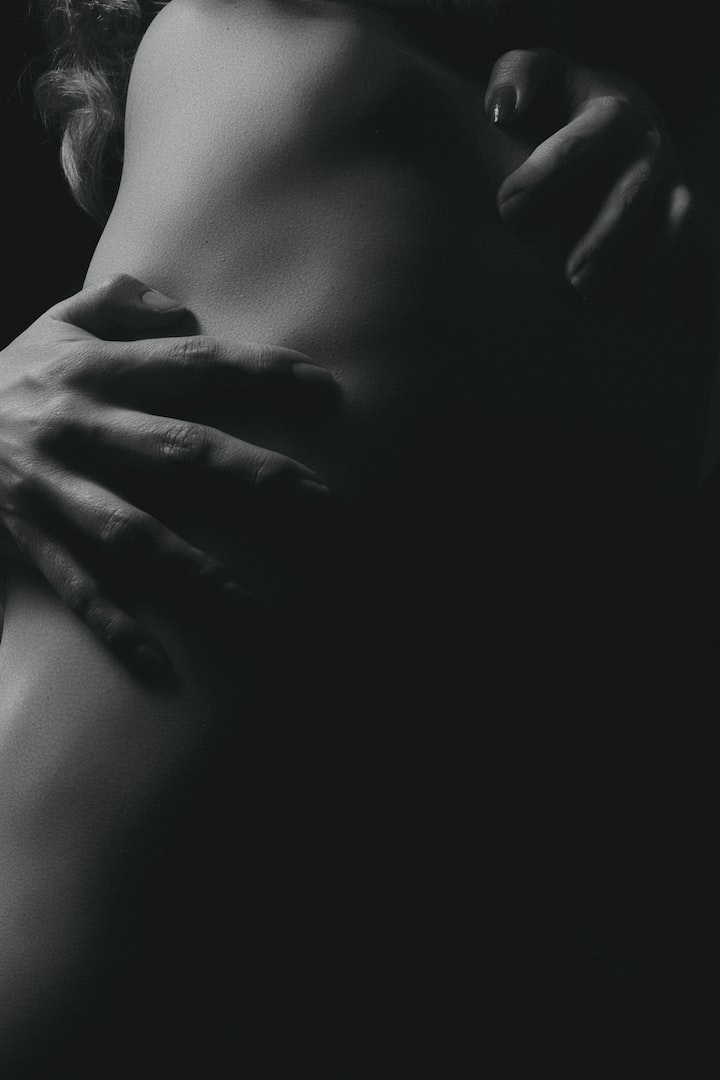 Without warning her focus was drawn to the dramatic change in the energy surrounding her, the noise from the busy bar she sat in suddenly became that of a distant mummer, the darkness becoming darker. Her pale soft skin twitching as she sensed someone drawing closer to her. She didn’t turn to witness the owner of the energy she already knew it was him.

He moved in closer, from behind her he stroked the hair covering her eye and leaned into her. Her body nerve ridden from the slight touch unintentionally released the slightest moan from between her plump blood red lips. He parted his lips in the cruck of her neck, whispering “get off that pretty little ass and let’s go”.

With no thought, no hesitation her body jerked to the demand, his arm immediately grasping around her waist escorting her towards the exit, eyes of strangers starring at the energy waltzing through them as like branches of trees in his way. Before their bodies reached the entrance canopy the door of his car swung open, signalling her next move.

The silence was deafening, his hand sat upon her thigh with a firm grip. Her heart racing, her head spinning and the ache between her thighs causing her to dig her nails into the cold leather of the seat beneath her. The energy between them fuelled by passionate tension, she parts her lips to speak, when he rapidly leans towards her “don’t speak, I only want to hear your unsteady breath”.

The car pulls to a stop, entering into what she could only presume was his home. He closes the door locking it behind them, her heart rate rises, her body trembling in anticipation. Standing behind her, the hardness of his cock beneath his jeans pressed against her, he slowly strokes the slim silk straps of her dress down her satin arms causing it to crease around her feet.

He stood back taking in each and every curve and dimple of her body, moving slowly round so they are face to face, she flinches to cover her delicate breasts, he catches her arms bringing them back down to her sides. He moves in closer, no space for air between them he takes her chin between his thumb and finger, raising her eyes to meet his he growls “your body, soul and mind are mine; you do not hide it from me” he takes her mouth with his in deep passion.

Her knees buckle at the intense pressure building between her legs, her wetness slowly starting to roll down her shaking legs. He pulls his mouth away, letting her catch her breath her mouth moaning, her body aching and begging. Placing his hand and the small of her back, perfectly between he dimples he guides her through to the lounge standing her in front of the couch he places him down between two large plush pillows, grabbing one and placing it between his feet on the floor.

Slowly lowering her body between his knees, the air filled with the smell of his arousal, he guides his cock into her mouth, her tongue dancing around his tip, he pushes himself further into her mouth. Moaning as she takes in every inch his head falls back embracing the sensations of pleasure writhing through his body. He glances down to the beautiful woman sat beneath him, her need for him increasing with her arousal, his cock getting deeper into her throat, he senses her body tensing and feels her breathy moans around him “don’t cum baby, not yet” he reaches down to her chin, releasing his cock from her mouth, her eyes begging for more.

Starting at her ankles he begins to lick the wetness that had slowly seeped from her throbbing pussy, she begins to wriggle as the sensations build inside, her mouth releasing moan after moan. His tongue slowly stroked her clit, her body jumping to the intensity of the sensitivity. His hands holding her down at her thighs, he slides his tongue inside her wet entrance tasting her sweetness, sending himself to the brink of his own euphoria, yet with the strength.

Her body begging for its release, her mind screaming for euphoria. He slides his fingers inside her, her body responding to the intensity, trying to hold back her cries, the euphoria takes over, with no going back she releases herself, her pussy throbbing, the juices of her orgasm spilling from her entrance. His tongue takes the place of her fingers, taking her orgasm into his mouth and sending him to his.

His throbbing cock releasing its milky fluids into the crotch of his jeans, he stands abruptly bringing her head to his cock and pushing back into her mouth. “I didn’t say you could cum” sitting down he brings her across his knee, her sensitive nipples smashing into the roughness of his denim jeans. He holds the back of her neck with one hand and the other he slowly starts to stroke her perfect ass prominent in the air “do not make a sound” with a flick of his wrist he spanks her ass, stroking it again he reaches round and inserts his finger into her entrance.

Holding back her moans she bites her lip, her body begging for more, his cock throbbing against her ribs, his fingers teasing her entrance again building her intensity. With swift movement he stands, gently throwing her over his shoulder and moving toward the stairway, throwing her down on to the soft grey sheets of his bed he binds her wrists with rope and covers her eyes with a satin band.

Flipping her onto her stomach he lays himself on top of her, his cock resting on her ass. “I want to hear you, I want to hear your pleasure, I want to hear you beg” as he finishes his demand, he shoves his pulsating cock inside her teased and begging entrance, her cries of pleasure bouncing of the walls her pussy tightening around his every inch. With each thrust inside her they both create a chorus of moans within the room their bodies intense sensitivity in sync.

More stories from Luna Arcana and writers in Filthy and other communities.