by Rose 2 years ago in lgbtq
Report Story 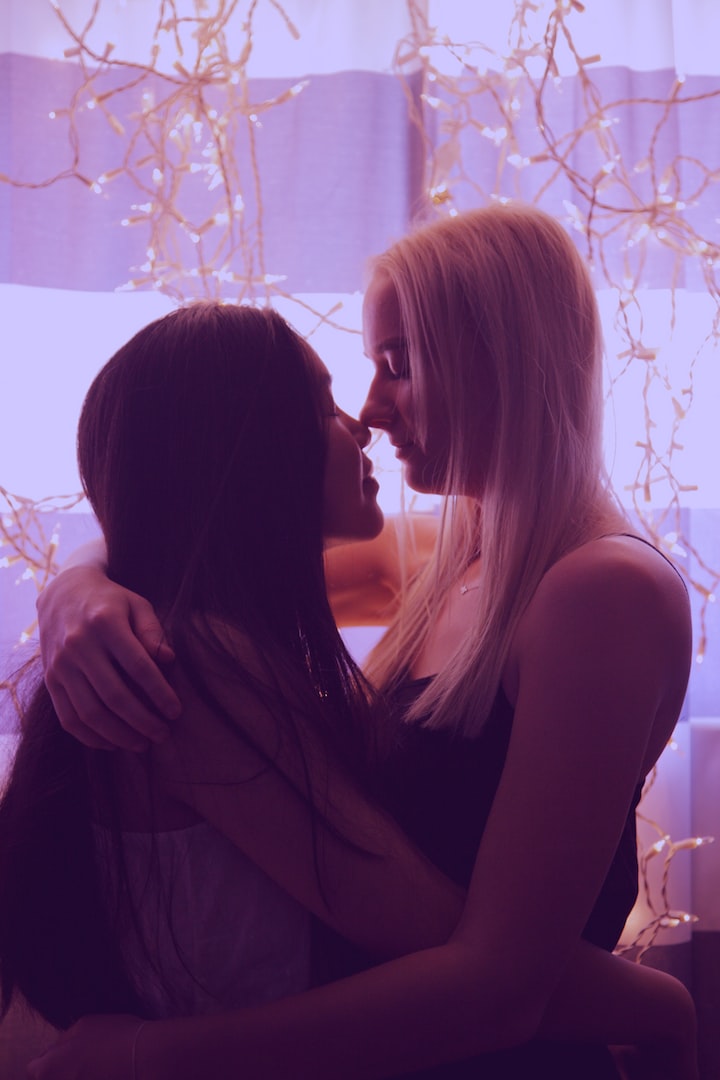 I noticed her smile first it was bright and seemed so sweet, there was no denying her beauty, and my eyes were drinking it in. She wars about my height and her dirty blonde hair only Increased my longing. She was a friend of a friend So were acquainted well enough for me to strike up a conversation. She was wearing black skinny jeans and a corseted top. I liked her style, it was sexy because it strayed from the norm, she wasn't trying hard to look gorgeous because she didn't need to. I'm not sure that she knew it though. Which only made me like her more.

I was wearing a low-cut t-shirt trying a little harder to accentuate my cleavage something the lacy red push up bra definitely helped.

The conversation went well every time she laughed, she learned forward and touched my hand and soon we were leaning in to each other My lips meeting hers ready to surrender to her touch. We were both a little shy but more than eager enough to head back to my place and let the fun continue.

When we had gotten back to my place, I wanted it to last so I get the mood with some slow music and poured us both a glass of wine. The lust was high and our hands never left each other as we ground rhythmically in and out of each other until I felt bold enough to turn the heat up a notch and begin to unfasten the ribbon holding her top on, I move slowly hesitating only fora moment to wait for her nod of approval.

When her corset falls off and reveals her easily D cups suddenly, I lose all of my nerves and put my mouth to good use sucking on her tit flicking it gently with my tongue. She moaned gently and rewarded my touch with her hand down my pants.

We headed to the bedroom and I showed her my collection of toys. Nothing fancy but enough to ignite enough lust in her eyes to keep me hooked for weeks. Her confidence was growing, I could see it in her eyes.

Her lips were on mine again and I was left gasping for air, I’d never felt this needed before her hands were pulling down my pants effortlessly and I decided to speed things up by pulling off my own top before moving down to her pants and returning the favour kissing her hip and crotch as I did.

She reached over and grabbed the cuffs; I wasn’t expecting her to make that choice but I wasn’t complaining as she cuffs me to the bed by my wrists.

‘Your mine now’ she whispers and I like it her new dominance is really getting me off.

‘Please what?’ she inquires with a raised eyebrow and smirk on her lips.

I could tell she was enjoying this just as much as I was.

‘please touch me’ I force the words out blushing as I do.

She stops me though and tells me to just lie back and enjoy the ride.

‘you’re such a naughty needy girl, I bet you like to be watched don’t you’ she says rather badly no longer afraid to get what she wants.

I moan my excitement piqued she must’ve noticed the lack of curtains in my apartment and realised the risk of being caught naked turns me on massively.

She gets of the bed turns and leaves the room, I panic for only a moment for she returns quickly, with a camera in hand.

Before I know it the cameras on and she’s live streaming, comments are coming in by the dozen, she tells me to relax and kisses her way up my leg all the way in between my thighs.

Moan after moan after moan escapes my lips and I can’t stop writhing about with pleasure underneath her. I’m convinced I’m being loud enough that all my neighbours can hear and this only excites me more as I picture how many people are touching themselves to the sound of my arousal.

I’m reaching my climax fast and I shriek out even louder as my organisation hits but she doesn’t stop until she’s sure she’s dragged out the organ as long as possible and then she slaps my sopping wet cut making me jolt.

Comments are still rolling in ‘I hope you’re not done with that slut yet’ one says and she looks straight into the camera winks and says don’t worry I’m not.

To be continued... (let me know if you’d like a part 2 and what you’d like to read by hitting me up on my insta just lead with erotica inspo)