Sex by the Pool, continued

by Heather Kinnane 5 months ago in fiction

Dixie had fun with one, but now she wants more 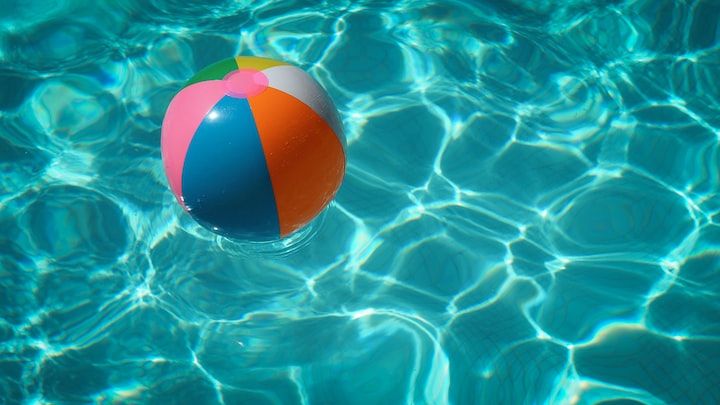 Photo by Raphaël Biscaldi on Unsplash

This story is the third part of an ongoing story - though each story also works as a standalone - however if you'd like to read the first two parts, you can do so here:

Dixie was in the pool early today. She couldn’t help it, her energy was high with the hope of the afternoon to come, and she had to do something to burn it off.

She hoped Josh would be able to convince his friends to come over.

She swam lap after lap, imagining several pairs of hands on her breasts and butt and between her legs, several mouths, several cocks. Her nipples tingled just thinking about it, her cleft contracting at the thought of being filled.

She was so distracted by the fantasy she didn’t hear the cars pull into the driveway, and it was only the sound of someone jumping the fence that pulled her attention back to the present.

She finished her lap and climbed out of the pool to find Josh and three of his friends by the fence, hands shoved deep in pockets.

Their gazes roamed across her naked body, two wide-eyed with astonishment, one with a grin on his face like he’d won the lottery.

The one with the grin stepped forward. “Dixie, right?”

“Tom. And this is Jarred, and Chris. And you already know Josh.”

There was a snigger, and Dixie grinned. Young studs, full of testosterone. Just what she needed. “Tom. You going to make the first move then?”

He approached her, undoing the buckle of his belt. “Josh said you like lots of cock.”

She took a step to meet him, reaching out to rub his erection through his jeans. “I do.” She took over freeing his erection, stroking it as it flicked out. She sank to her knees, her gaze holding his. “I love lots of cock.” She licked the tiny slit at the end of his penis, still holding his gaze as she ran her tongue from base to tip and back again, to suck at his balls.

He nodded. “No one’s ever done that to me before,” he said, his voice husky.

She grinned, and beckoned to the others to come closer while she went back to work on his cock, closing her mouth over his head. She watched him as she opened her throat, taking his entire cock balls deep, a little thrill travelling her body at the way his mouth dropped open.

“Fuck.” The word was a chorus, and in no time the other three had there cocks out, Josh stroking his while she took Jarred and Chris in hand. She stroked them for a while, and stopped sucking Tom so she could suck Chris instead. Josh knelt behind her, his hand coming between her legs to finger her pussy. She pushed her butt out towards him, wiggling it, hoping he’d get the hint.

He did, laying down to lick her pussy while she sucked off his mates.

She’d been so worked up, dreaming of this all day, it didn’t take long for an orgasm to shoot through her body, and she pulled away from all the cocks, and stood up.

“Was that it?” Jarred asked.

Dixie shook her head. “Josh was doing great, but one of the reasons I like multiple cocks, is those cocks are usually attached to hands and mouths, and I quite like being on the receiving end of the pleasure those hands and mouths can offer.” She held Chris’s gaze. “You do know how to give a woman pleasure, don’t you?”

Chris flushed. “Sure. Of course.”

“Great. Then let’s see you work your magic.”

Chris cupped her breasts, his thumbs grazing her nipples as he moved in close for a kiss.

He was a good kisser, that was certain, nibbling her bottom lip, exploring her mouth with his tongue Someone moved behind her, kissing down her neck and across her shoulder, one hand on her hip, the other coming around to slid between her folds.

She spread her legs wider, tilting her hips so he had better access.

Someone pushed Chris aside and started sucking on a breast, and soon Chris was doing the same.

“Mmm… that’s it fellas. That’s fucking perfect.” She threw her head back, enjoying the pleasure tickling her spine. “Wait.” She tapped Chris and Josh on the shoulder. “Let me lay down. Then I can keep sucking one of you while the others are busy.”

They carried her to the pool chair, and she grabbed Josh’s hand and pulled him close to she could suck him.

Soon she was lost in the whirl of sensations, mouths everywhere on her body, not just her breasts and clit, but leaving kisses across her stomach, and down her legs. Someone massaged her feet, then held them together, stroking their cock between her soles.

She came again, and Jarred slid between her legs, his condom-clad cock pressing against her opening.

“God, yes.” She released Josh’s cock long enough to reply, and when she turned back Chris had pushed Josh out of the way. She sucked him for a while, but then pulled away so she could focus entirely on the cock buried deep in her pussy.

Jarred didn’t hold back, his cock slamming deep with every thrust, and soon he was coming, pulling out to move away even while his cock was still pulsing.

Tom stepped in, and Dixie spread her legs wide, wrapping them around his hips as he slid inside.

“Fuck, you’re so wet.” He moaned as he began thrusting, just as enthusiastically as his mate.

It seemed to be enough to send him over the edge, and he slammed into her as he came, groaning and swearing.

She turned to Chris and Josh. “Who’s next?”

She gave him a wicked smile. “I want so much more. I want someone to fill my pussy while someone else fills my arse. Which are you going to pick?”

Chris stroked his cock, sitting on the only other pool chair. “You’d better come sit on my lap.”

Dixie did, kissing him again as she slid down over his erection. “Your dick feels so nice buried in my pussy,” she whispered.

“Feels amazing, doesn’t it?” He wrapped his arms around her and pulled her over so she was laying on top of him. “Alright, Joshy boy.” He called to his friend.

Dixie laughed, and reached back to pat her backside. “Only if you want to.”

Josh licked his lips. “Damn right I want to.”

He grinned. “With four of us, I hoped this might come up.”

Dixie took a deep breath, closing her eyes to focus on the sensations. He gave short sharp thrusts, until he was well inside her, and then both he and Chris rocked their hips, their thrusts sending another orgasm spiralling.

“Oh my God.” Dixie called as the pleasure inside her built. “Fuck. Yes. That’s it. Keep going. Keep going.”

They did, pounding harder and faster until they all came, the sounds of their pleasure loud enough for the neighbours to hear.

“And I’m here everyday.” She glanced at all of them. “One of you, all of you, come anytime. I’m always up for a some hot sex.”

Thank you for reading! If you enjoyed this story please click on the heart below, and if you really liked it, please consider leaving me a tip! Tips mean I can spend more time writing, and are greatly appreciated!