by Melissa Ingoldsby 2 months ago in lgbtq 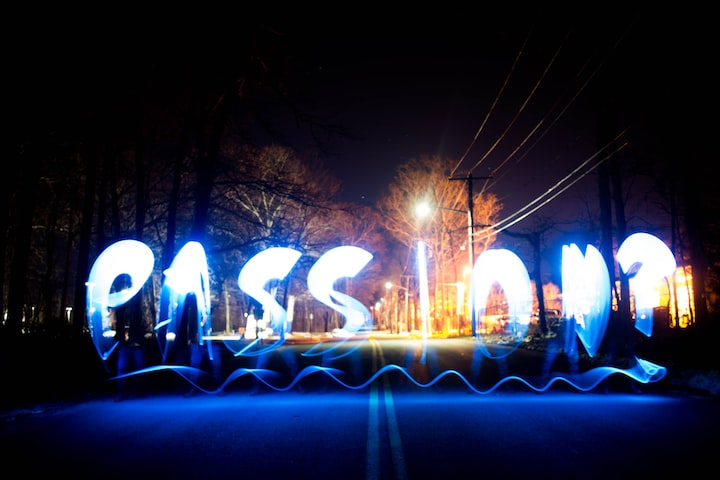 Photo by Kashawn Hernandez on Unsplash

God, I needed that.

I found out through a series of fantasies and images in my head—-that I really wanted to make love with my boyfriend.

The day he helped me when I accidentally dropped our dinner, cleaned it up and wanted me to take a bath—-even bringing me a warm towel and warm clothes, along with flowers, gifts and other homemade things—-I knew we were meant to be.

He cared for me, not just when it was convenient. He loved me, not just to receive something from me. He wanted my company, not for anything, just to be with me.

I always thought he would be the one to initiate our intimacy. But, turns out, it was me.

I had to fight my passion for awhile, though.

I knew my darling Roger was grieving, and in a lot of ways, so was I. Seeing him go through so much pain in such a short time was so heartbreaking. Seeing him lose his mother, then his father (in a different sense) was something that almost broke him. I wanted to be there for him as he has been there for me.

So, we grew and loved and worked and attended classes, and the months flew by.

Roger created a beautiful tattoo of two Scarlet Macaws on a branch, singing notes to the tune of Malena. We both got the matching tattoos.

I couldn’t hold it back anymore after that—-my passion for him was overflowing. It was a bit embarrassing—-I had to usually take care of my “midnight problems,” in the bathroom—-and sometimes Roger would catch on and give me these really hot hand-jobs(kissing me as he did so), which was great, but I really wanted more.

The day we finally went further with one another was a random day after work.

I looked to see Roger come home, and Porkchop started to bark.

“Good boy!” I said to him, petting his ear and head. He calmed down and went over to his dog bed in the kitchen, relaxing.

He was dirty from work and looked tired.

I had been thinking about sex all day, and when he came in and laid down on the couch, I had to go over to him.

“Hey, how was your day, honey?” I asked, taking off his boots for him gently.

I started massaging one of his feet. “Good. I missed you.”

“Oh yeah? Me too.” He sighed happily, closing his eyes.

Then, I decided to be a bit open.

His eyes opened and he sat up straight, his cheeks red.

“Excuse me?” He said in a small voice, shocked.

I leaned in to his face, sitting on top of his lap. I finally starting letting go of all the pressure I had been feeling the last several weeks—-and I kissed him, moving against him, our hips tightly against each other’s.

He kissed me back, moaning for a moment, taking in a deep breath, and then he looked at me seriously.

“Oh my… what’s gotten into you, baby?” He said in a breathless way.

“Oh, man, you are so pent up, I can tell…” He started and I kissed him again.

He nodded, taking my hand. Leading upstairs to our bedroom, I felt more and more nervous about it than I anticipated.

He noticed it, and we laid down on the bed.

I nodded, but our eyes met and he smiled at me in an understanding way.

He sighed, “Lots to do. Had to fix up an old ‘55 Cadillac Fleetwood Sixty Special Sedan. They just had a paint job on it, but needed some work done on their engine.”

I moved in close, “What did it look like?”

Roger got out his phone, showing me as he looked through his pictures. “This.”

Roger chuckled. “Eleven generations of beauty, form and function stemming all the way back to 1938.” He showed me another picture.

I nodded. “I’d love to see you driving in that.”

I nodded. Our faces drew closer. He kissed the side of my face, and he trailed down to my neck, his hot breath making me tremble as his soft kisses tumbled over my skin.

“Remember when we first started dating… and we both wrote down what we’d like to do?” He whispered, still laying kisses on my neck.

“Yeah?” I gasp softly, my hands holding onto his shoulders.

We both suddenly looked at each other eye to eye.

“I said… make love to you while making out with some candles lit. What was yours?” He said with this charming smile.

I sighed happily, “Really? That’s what you wanted?”

He nodded. “Yes. I was too afraid to admit it out loud.”

“That’s so perfect.” I bit my lip. Mine was crude.

Roger eyed me funny. “What?”

I nodded. I went closer, toward his ear and said, “I wanted to have our… you know…ugh, I’m so dumb. I wanted to have you and me touch… rub against each other with lotion until we come.”

Roger looked at me a bit surprised but then seductively, he licked his lips. “That’s not dumb. You’re not dumb.”

I sighed in relief. “You… you’re okay with that?”

I smiled nervously, and felt my stomach churn and flip. “Really?”

I nodded. “And making love?”

I kissed him in response. “I love you.”

“I love you too, sweet stuff.” He nodded and then said, “Take off those cute little pants, baby.”

I grinned and started to, and he helped me, which turned out to be a bit awkward. We laughed together.

“Okay. First time for everything. You still okay with it, babe?” He asked, and I saw he was pausing only to make sure I was aware this was my first time for doing this sort of thing—-ever, and I appreciated it.

Suddenly, I felt my whole world drift away from me as I felt his warm tongue on my length, swirling around and teasing me.

I gasped and moaned, when suddenly I heard him say, “That’s so fucking hot. You should bang my mouth a bit, baby…”

That carnal piece of dialogue from Roger turned me on so badly that I jerked my hips a bit, and suddenly he had my whole length in his mouth, and I felt in ecstasy. He moaned as I moved a bit in his mouth, and then I stopped, letting him be in control.

“Oh, Roger…” I moaned. It was like a million connections of pleasure hit my body all at once. I had never felt this way before.

Then, he stopped, and I saw his face. It was red and his breath was ragged.

“Honey, baby, sweetheart… would you?” He whimpered. I looked down at his own aching problem, and nodded.

I had never done this before, but, I felt safe and passionate and in control. So I just tried to copy what he had done to me. He immediately moaned and started playing with my hair, calling me every endearment and pet name in the book.

I smiled as I heard him but once I had his full length in my mouth, I decided to do something a bit differently—I gently used my fingers to trace varying degrees of pressure and circular movements against his balls.

I didn’t stop there. I let my tongue glide down and licked him all over.

He cried out loudly in an unintelligible manner, and I felt so ready to come just by hearing him, that I got up and said, “Do we have lotion, honey?”

He was almost sweating and didn’t say anything for a good thirty seconds.

Then he finally took in a shaky breath and answered, “Where the fuck did you learn that?”

I laughed, shrugging. “I wanted to make you feel good.”

“I almost came right then and there, Doug. Holy shit. Um… we have lotion in the bathroom.”

I nodded and got up, and went to our bathroom. I found a small bottle of lotion in the left part of my medicine cabinet and then went back to our bed.

He took it from me gently and put way too much on his hand. “Sorry.”

I nodded. I leaned down to kiss him, and we kissed with tongue for a while.

Suddenly, I felt his hand around me and the lotion. He stroked me a few times and then I saw he did the same thing to himself.

Suddenly, we were both close, so close, our bodies were one, and I couldn’t stop crying out his name as I laid on top of him.

And Roger kept cheering me on: “Oh, damn, baby… you’re so beautiful, keep going, mmm…. Oh, yeah…. Don’t stop, don’t you fucking stop…” An intense kiss. “You’re so hard… so hard.. yeah, I loved having your cock in my mouth. So fucking good, baby…”

His dirty talk sent me over the edge as I saw him realize how close we both were to climaxing—he suddenly flipped me over and took control. He took his length and started twisting his tip in a circular motion against mine.

I was so far gone, I was practically crying from how much pleasure I was in, but that was too much, too fast.

Suddenly, I felt it hit me in a haze of slow, intense waves of pleasure, and I came, and immediately after, so did Roger. We laid together, mystified and glowing, holding each other.

He kissed my hand and whispered, “What a fucking trip that was.”

That week, we made love.

It was slow, steady and very passionate—we had prepared ahead of time and that was more fun than the actual deed(that was more mind-blowing), but I’ll just write a little bit of what it was like.

It was a Friday night, and we had taken a shower together(my idea as we had never done that before).

Then, we discussed our first time(our idea).

“Do you want me to… uh, you know?” He asked, his expression looks flustered. “Be on top?”

I nodded. “Do you feel comfortable?”

“Yes. So.. and this is really the main thing I want to discuss… but which position?”

I blushed. “Ummm, can’t we just do it facing each other?”

I took in a deep breath, smiling, “Me too. Anything else?” I asked that because he seemed fidgity and kept looking down.

I scratched my head, and I know my eyes were wide. “You.. you want me to?”

The answer was so quick and sure, I kissed him.

“I saw you fighting. Fighting for me. Fighting for us. You fought through your fears and tears and passion. For me. To keep us safe. And you protected my heart,” Roger said softly, taking my hand and placing it on his chest. “Now, I’m so glad your passion is assuaged. Well,” He smiled, laughing a bit. “Just enough to wet our appetites!”

I laughed. “Our first time won’t be our last, that’s for sure.”

“Not the way you make me feel, Doug. That’s something stronger than passion. It’s real. And it’s ours because we made it that way.”