by Chai Steeves 4 months ago in taboo
Report Story

It was not what we were hoping for, but it was fascinating in its own particular way. 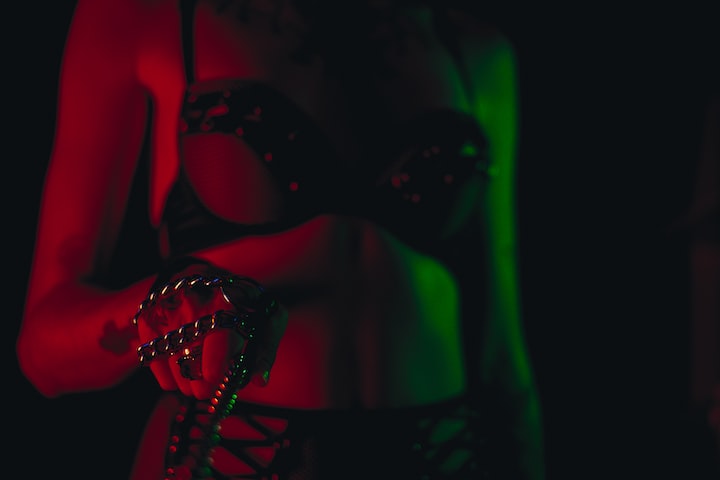 Photo by Maria Vlasova on Unsplash

Have you ever been someplace and you feel like you really like it, but you really and truly don’t want to be there?

So, six of us — two who we knew very well and two that we didn’t know so well — set off for this little adventure. The club was way out in the suburbs in a small industrial park. This was a bit of a yellow/red flag for us downtown snobs. We assumed that clubs like this, because they cannot get liquor licences to sell alcohol, don’t bring in much revenue and therefore need to be in places with cheap rents.

The owner of the club was working the door. An older guy with a bit of an odd vibe — slightly creepy in his sexual comments — you know, the kind of comments that are meant to be funny but are so trite they come off as a bit creepy. But only a bit — he was definitely in the ‘a little odd but harmless’ category.

But it’s impossible not to allow first impressions to be influenced by those who were there. And this is where I feel very conflicted. I wanted to like the crowd but I couldn’t. I will start, though, but saying that they could not have been nicer. No one was mean or pushy and they made us feel very welcome. But they just were not our crowd. I can’t put a finger on it, but every social interaction just felt odd to me. I couldn’t relate to the humor and it felt that we had nothing to talk about. And, while I don’t love being looks conscious, we simply did not find any of them physically attractive to us.

So, simply put, they were not our tribe. But this gets me — finally — to the point of this article. They were each other’s tribe. And that was wonderful. I say this with kindness behind it. They were very odd people. There were two guys there who could not really speak with others (unbelievably shy) and they just walked around staring at anyone doing anything remotely sexy. There were guys who couldn’t look you in the eye but would ask non-stop when we were going to put our partners on the rack. There were other couples who just sat silently on a chair and waited for something to happen (I guess, I couldn’t really figure out how to make conversation with them). And there was the guy who would only pass me my wine if I would let his wife suck my nipple — that was kind of cool actually.

But all of them — misfits in many ways — fit in there. They were nonjudging by each other and having a great time; they all seemed to really like each other, even though they didn’t necessarily interact a lot. I would say, in all honesty, we were the only ones that weren’t having what we would consider being an amazing time.

As a result, we were the ones who were the oddballs that night. And that is kind of all right. My wife and I, and our friends, we’ve been lucky enough never to really feel like the odd person out — the person who doesn’t fit it. If you are really shy, socially awkward, or have a conventionally unattractive appearance — that can be really tough. But at this place, they find community. And I really loved that. It just wasn’t our community.