My Husband Needed Some Female Guidance 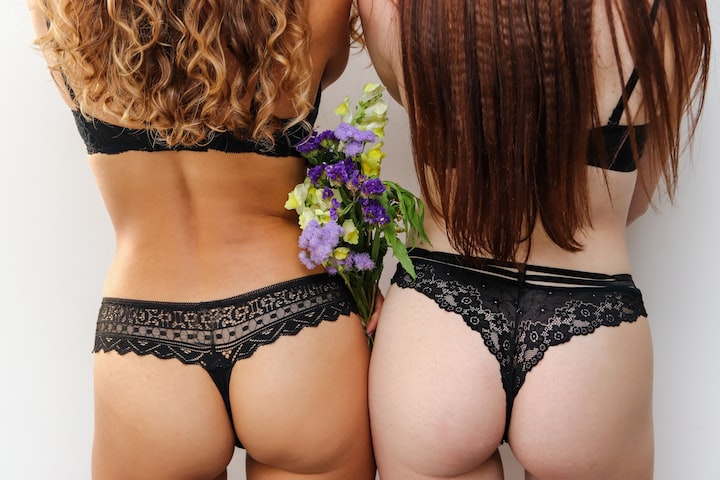 My husband Eric is well-intentioned, if a bit lazy. Complacent may be the best word for it, and this has applied in the bedroom maybe more than anywhere else throughout our marriage.

He knows I love him, so why should he have to worry about being the best at what he does?

Why would he bother to, for instance, do some research when it becomes abundantly clear that his mouth-work is shoddy?

I would do the research. I aim to please. But apparently, that’s just me.

My friend Alexandra — she goes by Alex — is a ladies’ lady. And from the sound of it, she’s quite successful with them.

I mean, from the literal sounds coming from her room when she and I were roommates, I drew the conclusion that she’s very good at what she does.

Now, Alex always joked that if I ever wanted my pussy eaten right, to let her know, and she’d show me a good time. And I’d always declined because a. I didn’t want to shift anything in our relationship, and b. I was afraid it’d be too good and I’d never go back to another man.

But when the day came that I’d finally had it with my husband’s poor performance in this department, I called her up, made my request, and received an enthusiastic volunteering of her skills.

So yesterday when Eric came home and shouted out his greeting, I called him into the bedroom.

And when he arrived in the doorway, he found me in my lingerie and Alex seated beside me on the bed in a tank-top and shorts.

“Sit down, honey,” I said, gesturing to the chair in the corner.

I smiled, trying to soften it a bit.

“So, as you know,” I began. “Alex knows what she’s doing when it comes to pleasing women.”

“And truthfully, honey, I haven’t been very…well, pleased.”

His poor little face had fallen considerably by this point.

“Look, I get it,” I continued. “You don’t have the same parts. Maybe they’re too complicated without instructions. So I brought in Alex. To give a demonstration.”

The look on my husband’s face was somewhere between shock and confusion, and I think there was something else there, but I couldn’t quite put my finger on it.

“Alex is going to eat my pussy, and you’re going to watch and take mental notes.” I smiled. “This is going to be really good for us.”

Eric didn’t say anything. It was like his brain had stopped working — some sort of glitch — and he just sat there staring at me.

“You ready babe?” That was Alex, and I turned to her, taking in a deep breath.

I was more excited about this than perhaps I’d let on. Actually, I was buzzing everywhere, and I was definitely wet where it counted.

“Ready,” I said, scooting backward on the bed.

She began to crawl toward me.

“You romance her first, seduce her,” she said, her eyes only on me.

She’d never turned those bedroom eyes on me before, and I liked them.

Alex took my face in her hands and brushed her lips across mine, moving them along my chin to my ear and then down my neck. I moaned softly — I couldn’t help it.

I stole a glance at Eric, still sitting in the chair, still watching in silence, being a good boy as it were.

Alex began to stroke my skin with her fingers — all those delicious strangely erogenous zones that husbands seem to miss — as she moved her lips and then her tongue down my neck and between my breasts.

By the time my bra was off and she had her mouth on my breasts, I was dying for it. Every flick of her tongue sent a little moan or cry flying out of my mouth.

Finally, she worked her way down my torso all the way to my sopping panties.

“See how much she wants it,” Alex said, again to Eric.

I snuck another glance. My husband didn’t respond. He only watched.

I closed my eyes and went back into the sensation. I felt Alex tease my thighs as she pulled off my panties, kissing and stroking everywhere but where I most wanted.

I felt the sheets getting wet beneath me, although her mouth had yet to make it there.

When finally her lips touched my labia, I cried out, surprising myself. Her tongue, when it came, was another delightful shock.

My pussy felt needy — both incredible and needy at once because everything she did was perfect and made me want more.

Why had I waited so long to let her do this? Was I an idiot?

The words and sounds were just coming out of my mouth — only semi-conscious expression that this was the best that anyone had ever treated my pussy.

I felt Alex laugh into my pussy, but I was too turned on to feel embarrassed.

My legs were beginning to shake, and then my pelvis too. Alex had to hold me down as she continued relentlessly in her work. I felt my pussy beginning to contract, beginning to squeeze her finger.

I came so fucking hard, crying out like that bedroom had never heard before, and Alex, trooper that she was, continued to stroke and suck until the last reverberations of my orgasm had ceased.

I lay there, eyes closed, spent.

It was the most amazing thing that my pussy had ever felt.

When I opened my eyes, I saw Alex rub her forearm across her mouth.

“Any questions?” she asked, looking at Eric, who was still in the same position he had been in the whole time.

“Honey?” I tried through my exhaustion.

“Uh…” My husband made a sound, but no questions or comments followed.

Alex turned back to me.

“I think maybe we’re going to have to do this again,” she said.

“Mhm,” I said, faintly smiling as I searched for the sheets to pull them up over myself.

“Mkay honey?” I said, rolling over and snuggling into the bed. “You can watch again next time.”

Elle A. Wild is a city girl who loves writing character-centric sexy stories that surprise even herself.

Elle writes from a perspective of female empowerment and pleasure, and if you’re not into that, well, she’s probably not for you.

Receive stories by Elle A. Wild in your feed
Elle A. Wild
Read next: A Night at the Theatre