by AlexisB about a year ago in fiction
Report Story

Survival is a Dirty Business 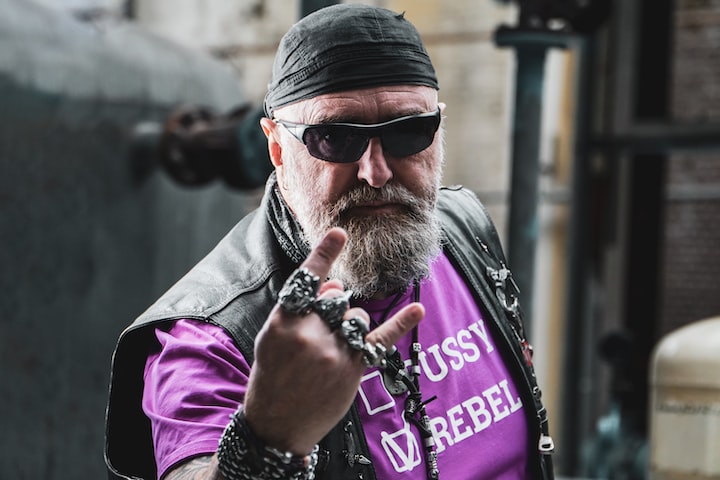 Photo by Petrebels on Unsplash

'Useless fucker!' Spat Monty, zipping up his flies, 'what do they teach you in juvie nowadays, eh? Enough already. Do 'im!'

Olga altered the angle of the camera. 'But instructions are very clear…'

'I don't want to hear about it! OK? Nuff's enough,' he sighed, 'unless Pete, you wanna get in there, maybe?'

Petrie Pete cupped his sallow, wizened face with his long yellow fingers, looked from the whimpering young man to the camera, and from the blow torch in Olga's hand to the new and somewhat disconcerting expression on Monty's face, and considered his options. He pulled out his phone as if it had just buzzed.

'Er, yeah, I just need to show you something, boss?'

He walked over to the toilet door and motioned Monty to follow him through it.

'How else we gonna show 'em how far we'll go to break our soldiers in? They love all that stuff, you've seen their training films, vicious mun!'

'Yeah, but we used to do that sort of thing to rival gangs, not our own. I can't see…'

'It's just a new twist on the classic. You never had a problem with getting more twisted before...'

'I'm just saying, dunno why we're recruiting when we haven't even got the contract yet!'

'And how are we supposed to get in with the damn Russkies, if we can't prove we've got the troops? That out there is 2022, not fucking… wherever you think you are.'

'I just can't get my head around why we don't just rebuild our business locally like, where you still command respect.'

'Locally? Who's buying? Everyone's dead or dying! It's a miracle we're still OK! An' if we stand a chance of surviving while they take over, it'll be by proving our worth to them as security, enforcers, ears on the ground, cos we're the only ones that understand this terrain, and that is why they'll give us their jab! Got it?'

'It's just, all them foreign sharks you're getting into bed with… There's no loyalty to be had. How do you know they won't just take the recruits off us once they've had their training? I just got a bad feeling. It's like we're being, you know, used…'

'You calling me some kind of pimp?'

'I'm just saying, when we get back to normal, we can put ourselves back on the map. We don't need them!'

'Christ alive! What's it gonna take to get it through that thick skull o'yours, there's no fucking 'map' anymore! There's just the world and it's all fucking Russian now! Except yer, on Barry Island, where there's just us, and that wanker Tony's lot, in the ice cream bar. Actually, you heard off him today? That monkey he owes us in interest, bit overdue innit? Why aren't you on top of that instead of standing around with your arse in your hand pouring cold water over my best efforts? It's no wonder I got camera shy…'

A scream came from the office where Olga, skirt hitched up high had her knee firmly planted on the recruit's back, holding him down across a chair, as she applied yet another branding iron. The stench was sickly sweet.

Olga leaned her impossibly tight waist back down to inspect more closely and licked the boy's spine approvingly.

Pete shuffled over to take a peek. 'Do you, really need three separate branding irons? Surely you could get one made that would do the whole rainbow in one go, get it over with, like?'

'And where is fun in that?' she replied.

'Exactly!' Snarled Monty, waving a gnarled finger in their faces, not so much to drive his point home or to remind Pete who the mastermind was in this outfit, but in some vague attempt to wipe away the pleasure dancing in her eyes. He wasn't entirely sure that the lad there was the only source of it.

Never one to have ever been unnerved in his entire criminal career, he was starting to feel all his sixty-six years. This filming lark was a bit overwhelming too. Watching them back, to say the clips didn't quite match up to how he felt it was all going while he was performing new and gruesome inductions with his gang, was the understatement of the century.

But then he was probably being a bit harsh on himself. Every successful man put on a bit of weight, it was the inevitable result of the good lifestyle he'd earned, and with this new flame by his side, he had every chance of his charmed life continuing if he pivoted his business just right. He was a survivor after all and that must mean something. His DNA was superior and he and his were meant to repopulate the earth. Probably wouldn't be with this frigid bitch though, she didn't exactly have childbearing hips.

Three large angry blisters were rapidly forming as Olga slapped a square of cellophane onto the meatiest part of the helpless creature and taped it to his skin with long lengths of surgical tape.

'I'm not sure,' ventured Monty, 'that this company rebrand is having the desired effect… on the team anyway. It's not even in a place that our people can show it off.'

'Yeah,' said Pete, 'see that?' He showed her a faded blue tattoo of a hand flicking the bird on his forearm. 'What's wrong with that? Communicates everything it does!'

'You show me finger one more time, I take hint. I leave and take my business, YOUR choice.'

'Do us a favour Pete,' Monty sighed, 'fuck off and see if that twat Tony's ready to cough up will you?' He poured Olga the last of the vodka he'd had to sell his beloved cat to get, and through grated teeth asked, 'Did we at least get some good footage?'

'Great, well, mind you upload it to that job site. Show 'em what we're made of!'

He leant in for a kiss but she pushed him away.

'Why you ruin film?' she said pulling the most irresistible pout.

'I didn't! Look, I've been thinking about it. I'm known for... chopping off fingers you know. I should stick to what's always worked. Why don't we film my collection?'

'You think my clients have not seen that one million boring times?'

'I… it's just that… what if, you know, the boy had clenched his teeth when you did 'im? End of sports! For both of us! Come on love, you saw how he screamed, I would have bled to death! Truth is, it's a bit off-putting now I've got that image in my head…'

'Is test for both of you, is bondage. He bondaged to you and my client he see you are manly strong for deployment.'

'And exactly how many of these videos does he need to see? It's been what, six this week?'

'You must reveal strong army! Big offices! Is why for I got green screen, to cover up what joke you are. To think I came here for you! In metal box so small I cannot breathe, my skin freezing, sticking to walls with ice! Then boat with waves that drown me like little doll of cloth. But still, I come because you say you have big security company, can look after me, protect me, buy me beautiful dresses. And I find this! Disgusting old man in tin shed!'

'I'll have you know, it's got quite a lot of equity built up, you don't do that overnight! I've got history here, my father crawled through mud all the way from Ireland to build this city and… Anyway, you never said you were coming!'

'Damn wanking right! Why would I come for this? I come with big business for big businessman. You know any round here for me?'

She went to march out of the office but Monty grabbed her arm.

'OK, but this thing you've got me doing, it's not me, I'm putting my foot down. And it's 'bonded' by the way, not bondage, that's whips and chains and what have you.'

'You want I bring whips and chains?' she gyrated. 'That will fix problem?'

'Oh, oh see now… ' he said running his fingers through her hair, pulling strands out from under her impossibly tight biker jacket, then moving in to unzip it, ' you know… exactly what to say…'

Grabbing her hair, he wrenched her head back and forced her lips to meet his, pushing her towards the table. She could feel his teeth bruising her as he ran his other hand down over the breasts of her black leather waistcoat.

'What's this?' He smiled genteelly, 'A memento from the old country?'

'Is nothing,' She lied, snatching back possession of the heart-shaped locket around her neck.

He jolted her head back further and searched her eyes, feeding on the first flicker of emotion he'd ever seen from her. What was it? Pain? Oh yes… He grabbed her hand and moved it down to let her appreciate the return of his long lost bulge.

She held his gaze defiantly as she rubbed and squeezed him till she felt him yield then swiftly sidestepped towards the door.

'Keep that feeling and let's we continue. Perhaps this time you get in character of ruthless, powerful man who can handle big business! Aled!' She threw open the door, 'We need cutaways… You…'

Petrie Pete slithered into view to offer his boss a drag on his joint outside as Olga reset the scene.

'Look boss, I'm not being funny or nothing, but… where on earth did you find that mad bitch?'

Monty shook his head. 'Thing is, I've checked out the names and it's all kosher, she is connected. C'mon, we've got one opportunity now to prove our worth and get vaccinated. We've got to grab it with both hands…'

Monty inhaled deeply, 'Let her do all the donkey work, I've got ideas for cameras she hasn't dared dream of. I'll soon have something on all her people, just you watch. Once we're safe mind, we are going to have to do something about her… Loose cannon!'

They finished the film with renewed vigour then set off to deal with Tony the old fashioned way, leaving Olga to tidy up.

Exhausted, she plonked herself on the sofa to set about pulling off the rest of her leathers. It took her all of twenty minutes. These earth clothes were so difficult! Why? Humans were such a mass of contradictions, she thought as she spat out the vodka and put the kettle on. They torture themselves on one hand but then, oh then… she reached down between the cushions to where she had hidden the last packet of chocolate hobnobs made before the mothership had released the virus that was supposed to clear all these vermin, … they treated themselves to such sweet ecstasy…

But she was disturbed by her locket buzzing.

'Have you secured numbers for our final solution?'

'Yes, Commandant there are thirty-seven survivors of variant six on the island. One dose of variant seven should suffice.'

'And you are fully prepared to clear Russia next?'

Zimfa concurred, closed her locket receiver and took a naked selfie to send to the next target, some Russian 'oligarch', lol, as if…!

Then she put her feet up to examine the stats on his 'pornski' app. Mmm! Excellent! Ten more likes on her latest sordid upload and she was on to win the last ever packet of some other earthling delicacy she'd researched called 'Pot Noodle'.

More stories from AlexisB and writers in Filthy and other communities.