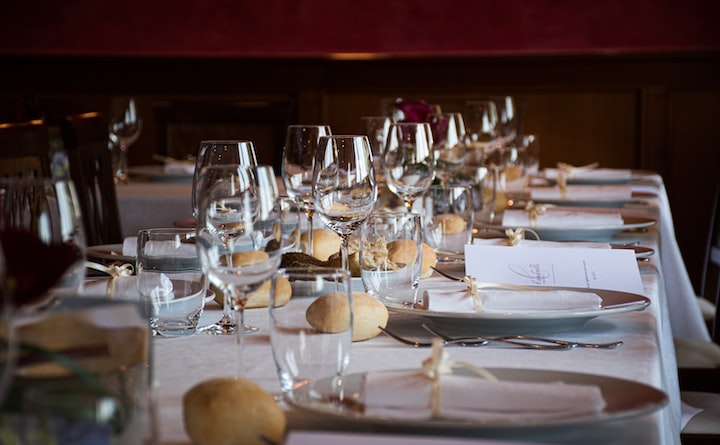 Photo by Fabio Sangregorio on Unsplash

She rings the doorbell, her stomach in knots, a throbbing between her legs. He opens it and welcomes her in.

“Right on time” he says with a smile. “I was just getting things ready, dinner should be ready around six”.

She puts her coat down, follows him to the kitchen, he leans in for a kiss. What begins as something gentle turns rough and raw. She stands on her tiptoes, he cups her ass.

“Screw that” he growls, “I think I want something sweet”.

Without warning she is suspended in air, as her legs wrap around his waist, his hands find her hair. He pulls her head back and bites the hollow of her collar bone. She snakes her arms around his neck, holds on tight.

He walks with her wrapped around him through the living room and into the kitchen, lays her on the oak kitchen table pushing aside the wine glasses, and empty plates with the silver trim he set out hours before.

The wood is sleek and polished, cool beneath lust heated skin. Her eyes close and she focuses only on his touch, as the scent of want and need flows out of her pores.

He kisses her again, her toes curl in response. Her hips arch upward, an invitation spoken without a single word.

He pushes them down, “Not yet” he says. Then goes back to his work.

He unbuttons her jeans, slips them down her legs, takes in the garter and thigh highs hidden beneath.

His fingers trace slow, tortuous circles on her skin, sending off a litany of sparks. She tries to lay still as he commands, her hips have a mind of their own.

Grabbing her wrists into his hand, he pulls them above her head. Removing his tie he binds them together, “Stay still” he demands.

She counts to ten, takes a few deep breaths. Bites her bottom lip, and obeys his request.

His tongue replaces fingertips, he tastes her inch by inch. Methodical and deliberate, his hand covers her mouth, muffles her moans. “Shhhh” he says, “you’re going to scream for me, just not yet.”

She squirms beneath him, her panties now soaked. “Fuck dinner”, she thinks as his mouth nestles between thighs. Tonight she is the buffet and he can dine to his delight.

He rises, she tastes herself on his lips. He spreads her knees apart, slips his fingers inside inside, then has her lick them clean.

His cock is throbbing, straining against its denim cage. His jeans join hers in a heap on the floor.

She wants to scratch, to claw, have his DNA beneath her gelled fingertips. Bound, at his mercy, she revels in a bit of rebellion, wrapping her legs around his waist, pulling him in tight. She slides up and down the table as he claims her again and again. She has become a living, breathing toy and she loves every second of it.

When the orgasm hits it slams into her gut, his name escapes her lips. Her gift is words, he has rendered her mute. Her tongue has gone stupid so her body speaks instead.

He soon joins her, diving head first into her into a tsunami of need, releasing himself inside her, as his lips claim hers, and teeth bite into skin.

Lifting her off the table, he unbinds her wrists, kisses her slowly, and reluctantly lets her go. She stands on weak knees, collecting herself, slips her panties on. Her nipples are hard, her flesh a maze of goose pimples as she tries to catch her breath.

“So,” he asks, a mischievous gleam in his eyes, “Now that dessert is done, how about I make you dinner?”

“I’d like that” she replies, and pours herself a glass of wine, watches him head naked to the fridge.

As a smile forms on her kiss bruised lips. She never thought of herself as a dessert kind of girl, but there is a first for everything it seems.

She takes in the muscles on his back, the ass she could bounce a coin off of and she knows what she needs. Tonight she will become a glutton, binge on her desire and need.

He begins to cook their meal, and she waits as patiently as she can. A beast has woken inside of her and it demands to be fed. She will feed it as often as it wants, again and again and again…