“Say it,” he instructed.

A smile twitched in the corners of her lips. And her eyes — damn, those eyes — they twinkled when she looked at him that way. She glanced up at the straps that bound her. The way the light flickered and played off the curve of her jaw stoked a wave of desire in him.

This woman who’d stolen his heart could awaken his body with only a wink. She was teasing him. It was working.

But he still wanted to hear her say it, and he would have his way. With a coy bat of her lashes, she giggled, voice like tiny bells.

“Make me,” she tinkled, and made a sudden motion of sitting up so he could watch her jerk against the restraints. Wrists, ankles, her graceful neck. Secured. Beautiful. His.

He raised an eyebrow and pushed into her gently, delighting in the rolling of her mesmerising eyes, the arching of her back, and the lascivious sensation of piercing into her with his cock. He withdrew again, leaving only his tip hovering just inside her, warmed by her delicious body.

“Hmm, Jared,” she hummed with mock disapproval. “You really are going to make me say it, aren’t you?”

In response, Jared carved into her again. He kept it torturously slow. Pleasure squeezed a tiny sigh from her supple body. He knew she was ready for a proper fucking, but he liked to draw it out, make her wait. Make her say it.

She’d hold out as long as she could, and sometimes he wondered if he really was the one in charge. He fucking loved it when she was tied to the bed, helplessly wrapped around his dick. It had him wrapped around her little finger.

And sometimes it almost wrecked him when she finally said it. He’d feel the rush, the surge; he’d have to take a moment, and muster his bravado, to keep from coming before things could really get going.

He was ready for it this time, though. The signs were there: her precarious breath, the tension in her stomach under his pressing thumbs, that half-lidded gaze somewhere between imploring and seductive.

“Say it,” he instructed.

He thrust into her. Hard and forceful now. Her tiny sigh became a squeal each time his cock rammed her, nudging her toward the head of the bed, nudging the bed into the wall while the cracks in the plaster deepened. Her wrists strained against the straps and her fingers curled around them; restraints became braces under his barrage.

He loved the way her face looked when he fucked her. Mouth open, lips and eyebrows contorted in unbridled, agonising pleasure; eyes clamped shut as he swept her up and up and away. She always opened them just before she came. It always sent him over the edge.

When the cry escaped her, he caught the wave; the tension, the slippery squeeze, the gush of her hot cunt, and then, as she looked up at him in utter submission, his own exquisite release deep inside her.

Eyes still blurred, he fumbled at her bonds. When she was free, she wrapped her arms and legs around him and, spent, he sank into her warm glow. Every breath was sweet air that rushed past her post-coital skin. He imbibed it with relish, drunk on aftersex and bliss.

“With all my heart.”

Under his body, she seemed to swell at his confession. He was pleased. His arms and legs grew heavy and sleep encroached upon him. Before he gave in to it, he wanted her, needed her, to know.

“I love how that sounds, Jared,” she whispered. “Please say it again.”

“I love you with all my heart. I’m yours, I think. My heart is yours.”

He looked at her and smiled. She beamed at him, brighter than the candlelight. Had she grown more beautiful in just these last few moments? No, of course not. That was just the shadowed fingers of sleep brushing across his face and chest, gifting him with a dream as he shut his eyes. 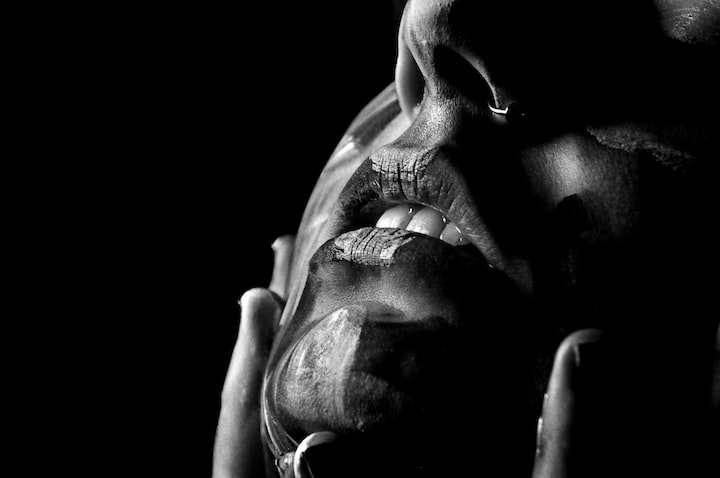 By Emiliano Vittoriosi on Unsplash

She tucked her hair behind her ears, running her toe, regretfully, along his right calf. With the back of her hand, she wiped her mouth. His arm lay idly across the bed, same as when he fell asleep. He was so flushed before and looked a little paler now, but still beautiful to her.

With a sigh, she slid off the bed and got dressed, swiftly but meticulously. She slipped her coat on and stepped into her shoes. After a last look at his still figure, she pulled the blanket over his gaping chest and blew the candles out.

It was almost a shame. Jared was a nice guy. And they were getting along so well too. She’d promised herself she wouldn’t do this again, but she couldn’t help it. It had been too long since she’d eaten properly, and his heart was so pure and full of adoration. It was so big and juicy too.

And, besides, he did say she could have it.

JL Peridot is a 3rd-culture 1st-generation Aussie raised by tiger parents, sweet-smelling books, and a love-hate relationship with words. Find more of her work at jlperidot.com.

See all posts by JL Peridot →