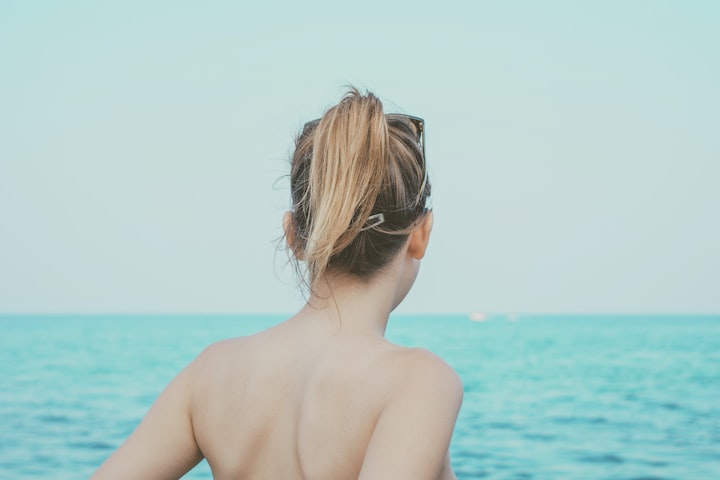 Photo by Nestoras Argiris on Unsplash

It was closing time at the small club I worked at serving drinks. It was a topless bar. We also had dancers on stage most of the night. It is a fun job most of the time. My name is Darren, and I am the bar tender and the bouncer at times. It is usually quiet though. I have a wonderful tale to tell.

I called last call and got the orders filled, all two of them. It was late so most everyone had gone home. The girls had all got their end of shift coffee to unwind from the night while our last dancer finished up. The girls all usually rode together unless they had something going that night after work.

That night the girl who drove had an emergency with one of her children and had to go home. She was the one who drove. I told the girls I would drive them home, but I had to clean up and lock up first. They all pitched in and helped. They did not even bother dressing back up. It was the first time I really noticed them as more than my coworkers. Looking at their breasts all bouncing around as they cleaned up the place while I did my receipts.

I went into the office to lock up the cash in the safe. When I stood and turned Erica was standing in the doorway. She was very tall. At least six foot and even taller in the heels she had on. She stood in her long flowing blonde hair that went to her booty. All she had on was a thin thong that barely hid her bush and a heart shaped locket that the club handed out last Christmas. Her huge breasts were shining from the lights in the office. Her nipples were so perky and hard.

Erica giggling as she was talking said, " We have been talking out there about you. In all the time you have worked here you have treated all of us with respect on and off the job. Like tonight you are willing to take us all home after work and did not ask for anything in return. You have been with us for five years now. Tonight, is the first night we have even seen you get hard watching us. We want to know if you are gay or have a girlfriend? What is the deal?"

I blushed and answered, " I respect you women. This is your job and you guys share your tips with me all the time. I am happy working here and never wanted to cause trouble. I am not gay. I do not have a steady girlfriend. Tonight, is the first night I slowed down and watched you ladies while you were cleaning up the place. You are all barely dressed, and you look so hot. I could see your love monkeys from the bar each time you picked up a chair. "

Erica blushing a little bit said, " So if we were all to have our way with you, we could count on you to keep it from our boyfriends and husbands? Because we are all ready to pop tonight. By the time we get home our lovers are in bed, and we are tired of using toys. Plus, we are all off tomorrow night. "

My jaw just dropped, and I was speechless. Erica came over and grabbed my hand and hauled me out onto the stage and totally stripped me down naked.

She dove on my staff with her mouth. She was like a wild woman slurping my staff all the way to bottom in her throat.

Tina and Jesse came up and set beside me while Lilly straddled my face with her love monkey. She lowered herself down so I could lick her lovely bare nubbin. She was dripping her sweet juices into my mouth even before I got my tongue licking her button. She was moaning loud too.

Erica was not wasting any time. As soon as she had me standing tall, she straddled my rod and started riding me hard and fast. She was so talented. She was thrusting me so hard our bodies were making a slapping sound with every thrust. I was moaning just as loud as the women. Erica bounced about three or four more times and yelled so loud. She drowns my rod in her juices and it sent me over the edge. I exploded deep inside of her.

Erica got up and went to the dressing room as far as I could tell. Tina and Jesse moved their attention from my chest down south.

They started rubbing me and massaging me in the juices that I was covered in. They massaged me back to life most of the way. Tina helped Jesse mount me. She laid on my mid-section eating Jessie while she slowly rode me. Tina was licking her nubbin with every slow stroke.

Jesse was now moaning and creaming on my shaft. It was so hot and so different. I could feel her velvet slick insides move up and down my shaft. Every so often I would pop out and Tina would suck on my rod a few times. Tasting Jesse's juices and then rubbing her button with my tip. Making Jesse moan even louder and drip her juices over my rod and balls. She would stuff me back in and slide to bottom.

Between Tina licking her nubbin and my shaft deep inside her she was moaning so loud. She let loose a waterfall on my shaft. It was gushing down my rod and out of her love machine. She was quivering all over but managed to slide off and trade spots with Tina.

Tina knew I was close, so she took it easy. She was stopping on each upstroke and letting Jesse lick her love button for a while. Now I know why Tina and Jesse were so close.

Lilly was still riding my face and enjoying every minute of it. She had already drowned me three times with her hot sweet juices. She was so into being tongued by me. She was a little older than the other girls but still had a very hot body.

Jesse had Tina moaning super loud now and she started pounding me. Her thrusts were so wild. She was taking it sideways into her love. Then she would just pound to bottom. Other times she would just grind on bottom. It was so intense. She was exploding her juices all over my shaft while she was grinding me deep in her. I had to let go and explode. It was just too much to take.

Jesse and Tina giggling said, " Come on Lilly let's get dressed we know you want to take him home since your boyfriend left you last week. "

Lilly laughing, " That was to be a surprise girl, now you ruined it. "

Lilly got up and helped me up. We all walked in and got a quick shower and dressed up to go outside. I locked up the club and set the alarm. We went to my car and the girls were all giggling. Lilly was just getting over to the car she had dropped something when we came out.

I was busy putting the seats back up when I noticed all the girls behind me. Lilly had a small box wrapped in tissue paper. She handed it to me as all the girls were laughing all at once now.

I was blushing when I said, "Thank you, this night has been wonderful."

I replied, " I never knew. This is a wonderful night. Ok girls climb in the Martian rover, and we will get you home for the night. I live in the singles section of pods so I will need some help finding your new section of living pods for couples and roommates. "

Our small village in the middle of this Martian wasteland was a great move. It is just like earth. You get up, shower, and go to work. You do not have enough time to do anything but work anyway. Mars is just as good as Earth. Especially since Earth has been declared uninhabitable now due to the nuclear winter it is in.

I dropped off all the girls except Lilly. She lived a little further out in the old section. She came with the first settlements. I drove out and finally found her place. She invited me in for the night. My rover would need to charge before I could go home anyway.

I got inside of Lilly's house, and she had her own surprise waiting for me. We went straight to the bedroom, and she satisfied herself using my tool. The words escape me to describe what a wonderful experience it was. She was so caring and so full of passion. It showed with every move of her body.

I awoke the next morning a little sore but feeling good. I rolled over to kiss Lilly and to my surprise there was a weird looking alien next to me.

The alien quickly grabbed hold of my shaft and changed her head into that of Lilly. It said, " Don't worry baby. I am Lilly. I chose to show you, the girls already know about me. "

She changed her hand into a vagina and was stroking my now hard shaft in a very tight very nice love monkey. She changed the rest of her body over and over while stroking me. She became each one of the girls at the club.

She changed her hand some more and put a mouth on my tip while she was stroking me with her velvety love nest. It felt so wonderful. I was being sucked while I was inside of a love machine. It threw me over the edge so quick. I unloaded gallons of my juices into her hand which she drank up somehow.

After she drained me, she transformed back to her resting form. She was the same height as Lilly. She was a female of her species with four bumps where her breasts should be. They were big and had nipples, but her skin was orange. She had a perfectly shaped circle where her love nest should be. She could open and close it at will. She even had lips beside it, but they could form around anything and pull it into her.

She explained, " I am a Martian and I love being a human and playing with you men but as myself I can do so much more with you. "

Lilly had me stay over all weekend and made love to me in so many ways that made me explode each time. It did not matter if I was hard or not, she even made me explode when I was limp.

With this heart shaped locket, I know what I want every night.

More stories from DS and writers in Filthy and other communities.