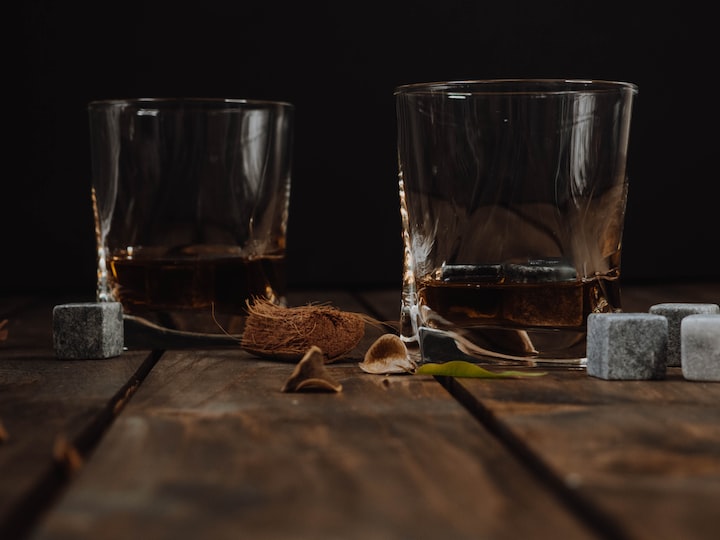 Photo by Anastasia Zhenina on Unsplash

He eased his car to a stop at the end of the long, gravel driveway. The area was beautiful. A pond, lots of trees, several acres, all hers. He’d never actually been to her home before, only seen pictures. He was looking forward to seeing her, to seeing the inside of the place she lived.

He walked up the steps to what could best be described as a cabin. The screen door was slightly open, and he texted her to let her know he was there. No response. He waited a minute, listened, thought he heard her voice from somewhere inside. He said hello, yelled into the house. The voice seemed to beckon back.

So, he stepped inside, the door creaking as he walked on the aging wood.

It was definitely her voice he’d heard, or at least sounds from her. He thought she’d be ready as soon as he got there, but she was working on something. He could hear a low humming. Maybe she was drying her hair. He kept walking, heading past doors and rooms as he followed the sounds.

He admired her body. She was fairly tall, about 5’7”, long, beautiful legs. Her thighs and ass were thick and perfect and welcoming. Her breasts were incredible, round, full, delicate pink nipples eager to be touched.

But, it was her eyes and smile that won him each time he saw her. That and her reddish hair, strawberry, short, like a fairy.

He placed his phone on her nightstand and kissed her full lips as she continued to pleasure herself. He loved the pale skin, the thin strip of red hair just above her pussy. He loved the way she tasted, the way she moaned as his kisses danced on her neck and shoulders. She loved the feel of his hot breath on her breasts, the sucking at her nipples.

He moved his head up to meet hers, gazed into her eyes. She welcomed him to her home, told him she was basically ready.

She got out of bed, threw on some sweatpants and a t-shirt, slipped on ankle socks and tennis shoes. She led him around the house, a brief tour. Then, they were in his car.

The trip would take about three hours. Louisville. They had tickets for a ballet and plans to enjoy the city through the weekend.

He guided his car through the country roads toward the interstate. Still, the stretch of road they were on was very lonely. They’d pass the signs for the Kentucky Bourbon Trail - Jim Beam and Heaven Hill and more. Just the two of them, some music, talk of politics and literature and magic and life.

She couldn’t wait three more hours to have him, she thought. And so, she didn’t. She placed her hand in his lap, eased up to his crotch. Cupped his balls through khaki pants and let her fingers trace the line of his cock. He became aroused almost instantly, and she stroked him through his pants as they continued talking. She loved the sly smile he gave as his car cruised past 85 miles an hour.

She unzipped his pants and reached in to pull his cock out from his boxers. She flicked his head with her tongue, tasted his desire in the throbbing veins of his thick shaft. Her head was in his lap now, all of his cock in her mouth, down her throat. He loved glancing down at his steering wheel and seeing her head there, feeling her mouth on him. He looked to his right, saw her body, her skin peeking out under her t-shirt. He loved the full, round shape of her ass. Thought of the nights ahead of them.

He saw the sign that told him they were entering Louisville. He told her it was time. She smiled inside, her pussy wet with hunger. She took all of him in, cupped his balls in her warm hand. Then sucked tight all the way up. Then back down, and up. Slowly, letting him feel her mouth, her lips, her tongue on every inch of his flesh. She knew he was close as he started fucking her back.

She took some napkins from his glove box and wiped him. He looked at her as she sat up and saw his semen on her lower lip. She helped him zip up his pants, and they found their way to the parking garage at the hotel.

They entered the lobby, found the front desk. There was still a bit of a stain on the front of his pants. She talked to the clerk with the mouth that had spent the last two hours pleasing his incredible cock.

Now, they were in their room. A two-room suite. He took a quick shower, put on a suit and crisp white shirt, no tie.

He sat on the couch in the outer room and turned on the television. She had about an hour to get ready before they would head to the ballet just a few streets over.

He was stunned when she came out of the bedroom.

She had on a simple black dress and thigh high stockings with a garter belt. She had on a hat with a semi-sheer sort of veil that suggested she was hiding . . . something. But, most stunning of all was her shoes. They were bright red leather with 5 inch razor thin steel heels. He didn’t really think much about how she walked in them, just about how amazing they made her look. He wanted her right then, but he knew he could wait. He finished the glass of Woodford Reserve he’d been drinking and they headed downstairs.

They took a Lyft to the ballet, no way she was walking through town in those shoes.

He loved helping her out of the car, loved noticing everyone else noticing her. He admired the curves of her legs, the firmness of her ass, the shape of her back, the way her breasts spilled out of the front of her dress.

As they were seated, he got them both drinks, double old fashioneds. They enjoyed the ballet and enjoyed having hands in each other’s laps. He especially enjoyed admiring her shoes.

They returned to the hotel and stopped for a drink at the bar. Manhattans, this time. Up to the room, kissing on the elevator.

Their door closed and locked and he led her to the window. They could see most of the city from their top floor suite. The windows were floor to ceiling. He stood behind her and kissed the back of her neck.

She heard him unzip and felt her own desire shock her body.

His hands on her waist, then under her skirt, then fingers massaging wet, pink folds. Opening her. He pushed the lace of her panties to the side and guided his heavy cock into her aching cunt. He pushed her against the window, let her see the city as he bit her neck and shoulders, as his cock claimed her as his. He was as deep inside her as he could go, grinding against her, looking down to see the red shoes that had set him on fire. He turned her face to his, looked into her eyes, and pushed deep into her. He kissed her, held her close, and pumped his cum inside her.

He held her there, held them there. Their eyes now facing the city, seeing the world. He told her she should make herself comfortable, take off the dress and heels and just be with him in bed. When she returned to the bed wearing nothing but a robe, he’d poured them both glasses of Old Forester over ice.

It was the start of a beautiful weekend.

More stories from A. and writers in Filthy and other communities.