After the Pub, Part 1

A shared taxi ride leads to a sexy encounter 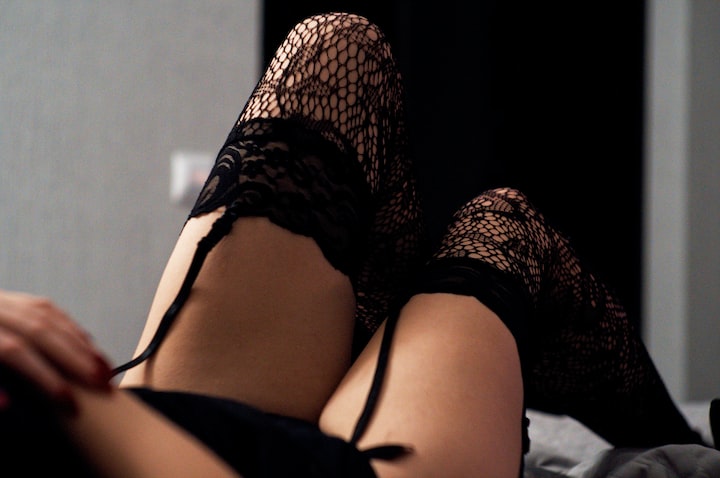 My Friday evenings followed a pattern; pub, drinks, chatter, then – hopefully – a hook-up with a beautiful woman.

This week was no different except that, despite my best efforts, I was taking a ride-share home to Shoreditch on my own.

“Just gotta pick up another fare, mate,” said the driver as he headed east.

“Another fare. You chose the cheap option, and there’s someone else going the same way as you.” He pulled over to the side of the road before my slightly booze-muddled brain could think of anything else to say.

The door opened and a young woman in a very short dress slid in. The dress was cut low to expose maximum cleavage, and the dark hair that fell across her shoulders merely highlighted her assets.

“Budge over, there’s two of us,” she said. I scooted across as another woman in her mid-twenties — a blonde in painted-on jeans and a top seemingly made of loosely joined triangles of gold — ducked into the car. “That’s us loaded,” she said.

The driver checked the destination — a pub only a couple of hundred metres from where I lived — then set off.

“Celebrating anything special?” I asked, more to fill the time than because I really wanted to chat.

“On the pull,” said the girl sitting furthest from me with a leery smile. “Heard this pub might be a good hunting ground.”

I blinked, surprised. I could almost feel the driver straining to hear what we were talking about. Our eyes met briefly in the rearview mirror.

“Oh, really? Anything in particular?”

“Tall, dark, handsome,” said the other girl, the one sitting next to me. She laid her hand on my leg and squeezed. “Know where we might look?”

I cleared my throat and licked my lips. At six foot two with dark hair and — if I say it myself — rugged good looks, she could have been describing me.

I grinned. “I might have a few ideas. What’s your plan?”

“Try the pub, snare a likely victim, and take him home for a boozy night of debauchery and lust.”

“Two victims, surely? Or are you hoping a single man will satisfy both of you?”

“I fancy having one of my own,” said the blonde. She leered at me across the back of the car. Her top did little to conceal her breasts, and when she leaned forward I was treated to a view of almost everything.

“You’re so unadventurous!” said the brunette, pushing playfully at her friend. She held out her hand. “I’m Julie, and this is Sandy.”

“Simon,” I said as I shook first Julie’s hand then Sandy’s. “Anything special going on at the pub?”

“There’s a band playing, The Swinging Cocks, or something,” said Sandy. It didn’t sound like she was a big fan.

“Musicians are always good for a guilt-free fuck,” said Julie.

“Touring, see? One night here, back to their hotel for a fumble or three, then the next day they’re off to their next gig.”

That made them laugh but they seemed happy — eager, even — for me to join them. We chatted for the rest of the journey. Nothing earth-shattering, just ‘getting to know each other’ stuff. It was almost ten by the time we got there and the pub was crowded. I pushed my way to the bar and ordered drinks. It took me about ten minutes to find the girls, who’d worked their way round the room till they had a good viewpoint near the stage. I could tell from their expressions that they weren’t entirely happy.

“What’s up?” I said as I handed over their drinks.

“They’re not really shagable,” said Julie, leaning over to shout in my ear.

I ran my eyes over the band. Three chubby blokes in, at a guess, their early forties, and a drummer in her mid-twenties who was absolutely going for it. I couldn’t help wondering what her drums had done to upset her as she bashed them to hell and back.

“The drummer is cute,” I said, trying to find a silver lining.

“I’d do her,” said Julie. She must have seen my surprise. “Like you said, she’s cute. I like women as well as men.” She shrugged. “You jealous?”

“Never been with a woman,” said Sandy, “but I’m a bit curious about what it would be like.”

“You are? Maybe we can fix that for you,” said Julie. “What do you think of her?” she asked, nodding at the drummer.

“Maybe,” said Sandy. She bit her lip. “Bit intimidating, though. Know what I mean? Gorgeous, but would she be into me?”

“Everyone’s into you, babe,” said Julie. I nodded my agreement.

“You’re way hotter than the drummer,” I said.

Sandy smiled. “Thanks.” She sipped her drink then slugged it all back and slid the glass onto a nearby table. “The music isn’t really working for me, and neither is the band. You wanna head off?”

Julie nodded and downed her drink. They both looked at me.

“Sold to the stud in the tight t-shirt,” said Julie. Sandy nodded again and we made our way out of the pub. Outside, the air was cool and fresh and we could suddenly hear ourselves talk. I led the way.

“So, er, how do you want to do this?” I asked. “I mean, I’m up for anything, but if Sandy wants her own cock to play with…” I left the sentence unfinished and pasted a hopeful expression on my face.

Sandy gave an exaggerated sigh. “I’ll make do, I guess.” She winked.

“I’m thinking that little Sandy needs to get out of those jeans. I want to get between those gorgeous thighs and taste your pussy, my dear,” said Julie. There was no hint of humour in her face, only lust.

Sandy coughed. “Wait, what? Are you serious?”

“Deadly. I want to kiss you all over, finger your cunt, lick you out then sit on your face and grind myself to orgasm on your tongue,” said Julie.

“Well, now you do, and having blurted out my secret fantasy, I now want another drink because I’m scared I’ve just ruined our friendship,” said Julie. The atmosphere was a little weird for the last part of the walk and it was a relief to have a reason to break the silence.

“It’s in here,” I said, turning into the courtyard of the apartment block and buzzing open the front door. I led the way up the lift. The girls were silent as we rode up to the top floor.

“Welcome to my humble abode,” I said, throwing the door open and stepping aside.

“Oh, wow, this is amazing,” said Julie. She walked through the short hallway into the open-plan living space. Floor to ceiling windows gave expansive views over London’s night sky. It was, I had to admit, pretty impressive.

“Like it?” I said with a grin. I kicked off my shoes and dumped my jacket.

“It’s making me super-horny,” said Julie. She turned to look at Sandy, lust in her eyes.

“It’s not bad,” said Sandy with a casual shrug. I thought for a moment we’d lost her, that she was going to bolt for the door and head home. Instead, she smiled and stepped up to stand right in front of Julie. “How do you want to—“

Julie kissed her. Just a light one. They stared at each other for a moment, then their hands were everywhere and they were kissing like love-starved teenagers.

I busied myself with drinks and by the time I was done they’d moved to the sofa. Julie had her hands up Sandy’s top, groping away. I set the drinks down and took a chair to watch. They broke for a moment and Julie let go of her friend’s breasts. Sandy giggled and snatched up her glass. She slugged down half the drink, coughed, then licked her lips.

“If we’re doing this,” she said in a calculating tone as she looked from Julie to me and back, “I want to see more of what I’m getting.”

“It zips up at the back,” said Julie, leaning forward. Sandy reached behind Julie and fumbled the zip. The dress fell open. Julie stood and shrugged her way out of it. No bra, I couldn’t help noticing, and a pair of thin black knickers that covered essentially nothing. Her breasts were amazing, her body toned and tight. She shook her head and pulled her hair away from her shoulders.

“Wow indeed,” said Sandy huskily. She looked at Julie’s breasts then down at her knickers. She licked her lips again. “But we need to see it all,” she managed to say.

“You first,” said Julie, pointing at Sandy’s top. She looked at me. “And you.”

I pulled my t-shirt over my head and unbuckled my belt. My jeans slid to the floor and I kicked them away to stand before them in only my boxers. In any other situation, boxers tented by an enormous erection might have been embarrassing, but it was a struggle to keep them on.

“I work out,” I said modestly. We both looked expectantly at Sandy, who was still sitting, fully clothed, on the sofa.

Sandy hesitated. I could tell she wanted to go further but something was holding her back. Julie must have sensed her reluctance.

“Oh, for fuck’s sake,” she muttered. She slid her knickers down and stepped closer to Sandy, practically forcing her smooth pussy into her friend’s face. “Is that what you wanted to see?”

Sandy blinked and looked past Julie at me. I pushed down my boxers and let my cock stand free. Julie looked around and grinned, then Sandy reached out and slowly ran her finger up Julie’s leg to her hip. Julie stepped back.

“Oh, no, that’s all you get without showing some commitment,” said Julie. “Come on, kit off.”

Sandy stood up slowly. She looked hopelessly nervous, and she took her time unlacing her boots, setting each aside carefully, glancing from naked cock to naked cunt. She undid something on her top and it fell away to reveal her breasts. Not as large as Julie’s, but every bit as beautiful. Julie made a ‘hurry it up’ motion with her hand and Sandy smiled broadly. She was enjoying this. She unbuttoned her jeans, taking her time, and turned around. She wiggled her arse then pushed down her jeans. Her knickers went as well, and when she turned back, completely naked, we got our first glance at her neatly trimmed bush. She was gorgeous.

“Well, that’s lucky, because I want to fuck you both as well,” said Julie.