He may have been busy in his office, but that didn’t stop him teasing me in our bedroom 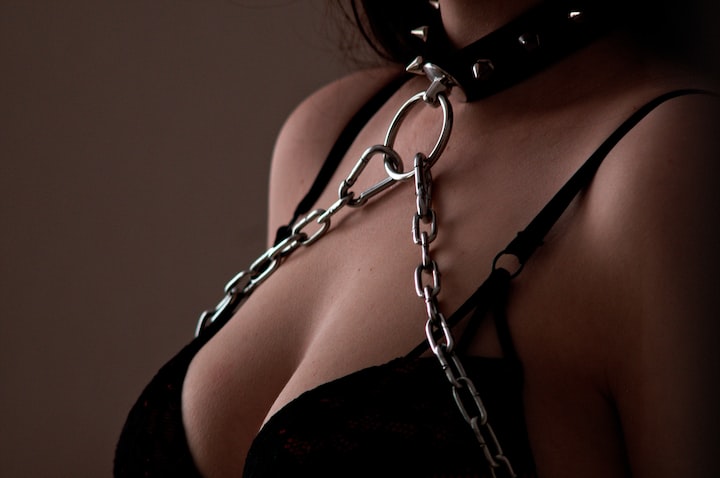 I felt the delicious sting of his hand as he walloped me on my backside, barely covered by a pair of skimpy satin panties. I giggled like a cheeky imp and poked my tongue out at him.

“Hmmm, c’mon Sir,” I teased. “Give me the very best of your worst. Pretty please?”

I lay prone on the bed, my upper torso raised on my elbows while the black lace bodice I was still wearing from the previous night revealed the creamy slopes of my breasts. I was being a bratty temptress, I knew it. But I didn’t give a damn.

I just wanted to play.

I watched as he selected a silk tie from the rack inside the wardrobe door and ran it through his hands a few times. My pussy began to tingle; I had seen him make that same gesture many times before when preparing to restrain me with one of those neckties of his. I was hoping he planned to do exactly that to me again. Right now.

“Baby, can’t you stay here in bed for a while?” I whined, twisting a lock of my thick brown hair around my finger and fixing my features into a sullen pout.

“What’s gotten into you this morning?” he laughed, folding his crisp white shirt collar over his now neatly arranged tie.

“I know what could be getting into me,” I purred playfully, jutting my hips upward so that my ass rose off the mattress invitingly. “Doesn’t that sound much more appealing than boring old work?”

“That boring old work is paying off the mortgage and keeping our bellies full,” he scolded, shaking his head and raising a stern eyebrow at me. God, I loved it when he admonished me. “We can’t all lie around in bed all day like a lazy slapper.”

“It’s my day off,” I retorted. “And why are you getting all dressed up anyway? Aren’t you working from home?”

“Shareholder meeting via Zoom,” he explained, giving himself a final glance in the mirror. His deep brown eyes met mine in the reflection, and he must have seen the mischievous look on my face, because he turned around and glowered. “A meeting that you WILL NOT be disturbing. Understood?”

“I would never disturb your meeting, darling. I — ”

“And you won’t be disturbing me while I’m in said meeting, either. Will you?

“Oh, fucking hell, baby,” I begged, squirming and writhing on the bed beneath him. “I was just kidding. You know I was just taking the piss.… Babe, please…Sir…”

“Sorry, darling, but this is a very important meeting, and I just can’t take any chances,” he countered, facetiously. “I’ll grant you release later — if you behave — but for now, I’m afraid…..”

He reached into the bedside drawer and, with a lascivious wink, drew out the Desire Luxury app-controlled panty vibe. Its purple bike-saddle-shaped curves always made us think of that odd purple McDonalds character and, as my Master clicked the on switch on the body of the vibe, syncing it to the app on his Android phone, I cried, “No, not Grimace! Please. I’ll be good, Sir!”

As I groaned and grumbled, he scowled and walked purposely towards the bedroom door, upon the back of which hung many of our bondage toys. For example, the large silicone ball gag.

“There you go. This should keep you distracted while Sir’s busy at work,” he soothed. “You be a good girl, now.”

After a few minutes, the vibrations stopped. Then moments later, there was another quick buzz, more intense this time. Sir letting me know that he was firmly in control. As if I weren’t fully aware of that already.

I’m not sure how long I lay there in silence, splayed out on the mattress like a human sacrifice. After what felt like eons, but was probably only about twenty-five minutes, I heard Sir’s voice from downstairs; the strong, authoritative baritone he used to assert his confidence and take control. It was a tone he used with me whenever he was Domming, and it aroused me no end to know that he used that same powerful timbre at work.

As I mused on how sexy Sir’s “Boss” voice was, the vibrator suddenly hummed back into life. I squealed behind the ball gag and nearly flew off the bed as the pulsing began again, stronger this time. I wiggled and shimmied, but could not seem to shift the vibe into the position I needed to get me off. As Sir toyed with the various settings on the app, expertly building my arousal up to fever pitch before changing the strength, tempo, and vibration pattern, my orgasm wavered in front of me like a desert oasis before suddenly vanishing like a cruel mirage.

The sensual torture went on for what seemed like forever. Sir would build me up to a frenzied crescendo, then change the vibration setting or switch the toy off all together, leaving me panting, and balancing on a knife’s edge. As each climax ebbed and flowed, the strength of my approaching orgasm grew. I knew that when I was finally allowed to come, my climax would be truly mind-blowing.

Unfortunately for me, I had no idea how long it might be until I would be permitted to ride that soaring wave and tumble into orgasmic bliss. Can you even begin to imagine the frustration of being toyed with like that, only to be denied the mercy of a much needed climax?

Enjoyed the erotica? Please send me a tip below so I can keep writing.

Receive stories by Jupiter Grant in your feed
Jupiter Grant
Read next: The Man with the Master Key