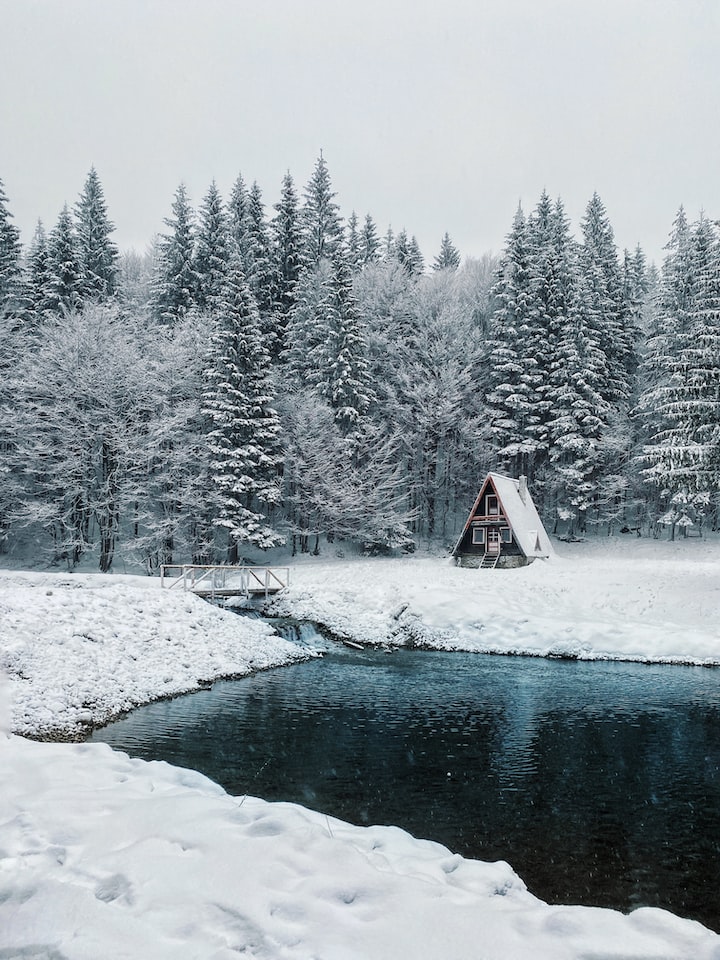 Photo by Gloria Cretu on Unsplash

We drove up the snowy, winding road towards the cozy A-frame cabin. This isn't the typical cabin found on Airbnb that you plug into your GPS and it takes you directly to the front steps. No, this is the type of cabin that you have to remember the landmarks that your mother vaguely mentioned before the condescending comments about your failed marriage and after questioning your parenting skills. Have to love mothers, am I right? Even so, she believed that Emilia and I should get away from what's becoming our norm as of late and spend some quality bonding time. Just two girls taking a road trip to my late Aunt Helen's cabin in hopes of finding a smidgen of inner peace and some much needed clarity; well at least I could use some of that. Her directions were overly simplistic at least. "Veer right at the fork after heading down a bit on Turner Creek." Mother uttered as she scratched it down on a napkin. "If you pass the red rooster on the left, you've gone too far." She added. "Look for trail marker #113 and follow that all the way and you'll see the mouth of the creek open up on the right and boom! You're there!" She concluded with an exclamation point. I asked her why she couldn't just text this to me and she answered with dramatic hesitation, "I felt as if I was drawing you a treasure map and once you arrived, well 'X' marks the spot!" What a drama queen.

I remember coming to this cabin once before. My dad had brought me here for a week during the summer of 98'. His sister, my Aunt Helen, had just purchased it from an ad in the newspaper. She bought the cabin for a bargain on just the views alone. Tucked into the crease of a valley, the cabin was far enough from the city, but close enough to the county dry goods store for supply runs. I reminisce viewing the swans splashing in the creek from the front window, while relaxing on the nook my dad built. Every night he and I would unroll our sleeping bags and place them by the fire. We would lie there and stargaze and that was when he showed me the different constellations and taught me about the solar system. Emilia never met her grandfather. Oh would he love her as she would him. They would've been two peas in a pod. I see a lot of similarities of him in her and I wouldn't change it for anything.

We parked the car and unloaded our duffel bags and just as I started making my way through the stout snow, I was under attack! Emilia had thrown a snowball and hit me dead center of my back. It was so on girl! I dropped my bag and bent over to grip the snow and make my own ammo and just as I packed my first snowball nice and tight, 'WHAM'! she nailed me again! I stood up and wiped my backside and yelled, "I surrender, I surrender"! Emilia chuckled and laughed and it dawned on me that I haven't heard that laugh in quite some time. In that moment, as most of my body was shivering with defeat, I had a big smile on my face and a warm heart. We made our way up the porch and I jiggled the jingling keys and found the correct one that unlocked the door. The wall-mounted space heater my dad installed hasn't ran in I don't know how many years. I asked Emilia to please be patient as I had no directions, even worse, no cell service to YouTube how this old piece of junk turns on. There was a firewood box on the side of the cabin and I found a box of matches after opening all of the kitchen drawers. I gathered scrap receipts from Dunkin' and various other drive-throughs to use as kindling; and yes, I did throw in my mother's napkin as well.

Dusk has settled over the valley. Peaking out from behind the curtain on the front window, I scanned the tree line to reassure myself that we are safe and alone. We are safe, but we aren't ever truly alone in nature. Emilia joined in the hunt as we both cuffed our hands around our eyes for make-shifted binoculars and pressed firmly on the frosted glass. We started from the right side of our viewing frame and slowly shifted focus across as we saw the faint edge of the creek water. The moonlight trickled over the frozen creek and highlighted a fluorescent warm white except for one spot. Lone behold, we witnessed the most majestic deer that we've ever seen. In its natural habitat. In the soft, plush snow, the deer pranced with grace and a sense of elegance as it searched and sought out its on freedom.

In that moment as Emilia was gazing over that deer. I saw a part of myself through the animal. I saw that once I simplified things and allowed myself to be free of my past and focus on the journey that I would be okay. I saw Emilia in the animal as well. I saw what great adventure my beautiful daughter has in store. But for now, we can enjoy the comfort of this cabin and add to the memories that once faded me.

I'm a big kid at heart and enjoy fictional stories where teenagers are the main characters and have to 'Save the Day'. I write poems and short stories recreationally and now I would like to share stories with anyone that can find comfort.

More stories from Daniel A. Pope II and writers in Fiction and other communities.