Under the Pear Tree

by Sapphire Blackgaard 9 months ago in Short Story
Report Story 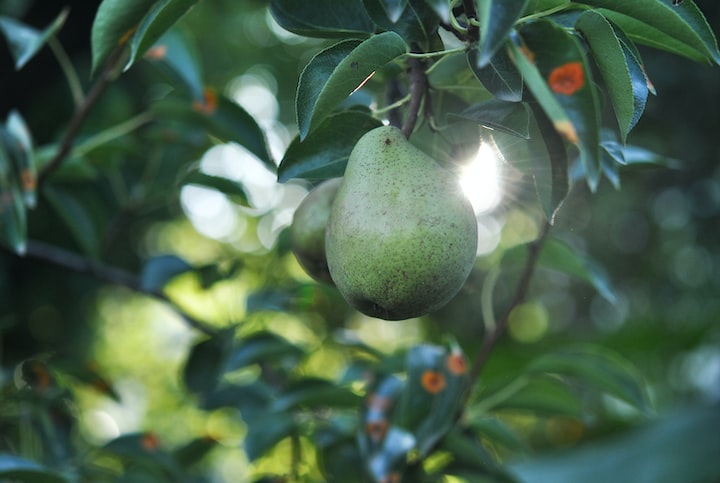 The land had really changed since she was a little girl. The only thing remaining of the great orchard, that once stood on this land, was the great old pear tree that still bore fruit where all the other trees had died off. That was her pear tree or at least she’d come to think of it that way over the years. If that tree could talk it would have so many stories and so many precious memories to share.

Some memories were wonderful and others were sorrowful and still others a combination of both. She imagined that the tree had a better memory of events in her life than she. Her first memory with the tree was when she was ten years old.

Her family had just moved to the area only one week prior. It had been an awful week, that was perhaps because she’d been in an awful mood. It came to a head when she’d met the local bullies. She’d been so upset that she’d fought back and then ran. She’d run all the way to that big orchard and plopped down at the foot of one of the trees panting and crying for home.

That was when she first met him. He was just one year older than her with brown hair and bright blue eyes that were full of concern.

“Are you alright?” He asked looking at her from where he stood.

“Then why are you crying?” He pressed.

“I’m not crying!” she denied, though the truth was very plainly seen.

“Yes, you are.” He countered, stepping closer.

“Go away!” She stubbornly turned her face away from him.

“But this is my home.” He replied bluntly.

She looked back up at him with a befuddled expression. “You live in the trees?”

He gave an amused snort and shook his head. “No, silly. This is my family’s orchard and part of our land.”

“Oh.” Was all she could respond with as embarrassment set in. “Sorry.”

She nodded and they went off to play on the big expanse of his family’s land and he became her first friend.

She smiled at the memory, the first of many good ones. They had played and had many adventures that summer and then been delighted to find each other at the same school. The tree he’d found her under had become their meeting place and the starting point for so many more wonderful memories. However, it also became her retreat when things went wrong.

She was fourteen when they lost the dog they’d had since she was five. It had been a beautiful black lab with the sweetest personality and its life was cut short by a car. Of course, her parents had offered to get a new dog, but it wasn’t the same! So, she’d done the only thing she could think of and run out the door all the way to the pear tree where she’d cried a good long while.

It was an hour later that Jonny found her and she’d cried again only this time on his shoulder. He understood and after she’d cried herself out, he had tried to cheer her up with their favorite activities. It took the whole of the afternoon before she started to smile again and when she finally did, he looked like he’d won the lottery.

A week later he was able to lure her into looking at puppies, which melted her heart and made her agreeable to the idea of a new dog. She’d come home with a brand-new puppy, much to her parents' chagrin. That puppy became part of hers and Jonny’s adventures and they even named it together.

That was a bittersweet memory for her as she rested on the bench in front of the pear tree. She leaned her head back to look through the branches as she let another memory wash over her. This one occurred when she was sixteen.

Jonny had brought her to the pear tree and surprised her with a picnic.

“Oh! Jonny, this is so nice!” Lily exclaimed in delight.

“I hoped you would like it, Lily.” He said, sharing her smile.

“Like it? I love it!” She all but squealed. “You even set it up under our pear tree!”

“Will, it was the place we first met. It seemed only fitting.” he smiled.

“What do you mean?” She tilted her head in question.

“I mean, Lily O'Connell, if you’ll allow it, I would like to court you.” He explained. “I’ve already obtained permission from both your parents.”

Lily stared at him in stunned silence. He was actually asking to court her? Her? He’d even gotten her parents’ permission before hand. She thought it the sweetest thing he’d ever done since she met him, barring paying for the puppy.

She placed a finger to his lips. “John Riley, hush up. Of course, I’ll accept. I’ve been waiting for you to ask since I turned fifteen!” She grinned at him.

He gave a sheepish grin. “Well, I didn’t think your father would permit me to ask then.” He replied.

“You’re probably right. He might have killed you instead.” she laughed and he joined in soon after.

They went on to enjoy their picnic and she was more than happy to be his girl, of course he was her man in return. Many a date took place under the pear tree after that.

She smiled with her eyes closed. She still remembered how she felt when he’d asked her permission to court her. John “Jonny” Riley had almost always been the utmost gentleman. It was hard to be considered a gentleman at only age eleven or even up to thirteen. He waited a whole year of courting before he asked her to marry him. That was another memory that took place under the pear tree.

“John, what are you up to this time?” Lily laughed as he guided her, blindfolded, to another planned surprise of his. He always did love surprising her.

“Just one more minute, love. We’re almost there.” He replied.

“I can smell the fruit.” She said, sniffing the air. “Are we in the orchard?”

“Just be patient a little longer.” The laugh in his voice at the very least confirmed her guess. Finally, they stopped. “Don’t take off the blindfold yet.”

“Alright, but you better not be playing a trick on me.”

“I would never play a trick on you, Lily.” He responded in a tone that made her almost melt. “Okay. You can take the blindfold off now.”

She did so and blinked as her eyes adjusted, recognizing the familiar spot before she gasped. Jonny was on his knee, surrounded by beautiful potted flowers all of which were her favorites, and holding up a simple but elegant ring.

“Lily O’Connell, will you do me the honor of being my wife?”

There was only ever one answer for her. “Yes!” She squealed as she tackled him into a hug.

That had been one of the three best days of her life. Unfortunately, the second-best day of her life was postponed by the war. He didn’t even have to ask, she willingly waited for him those long years. Ever the gentleman, though, he had asked.

John had taken her to the pear tree that day. She knew what was coming, so she’d waited silently for him to gather his thoughts.

“Lily, I know you understand why I have to go, but may I ask you to wait for me? I’ll make sure you get the biggest wedding ever after the war, I promise.”

“John, I don’t need a big wedding. It can be the simplest wedding ever for all I care. Just please, come home safe.” She rebutted.

He’d kept that promise and come back alive, though scarred. She’d loved him anyway and they’d gone on to get married under the pear tree. In the following years they had five wonderful children, three boys and two girls. They’d grown up to be fine people and adults to be proud of and she was proud of them, each and every one of them.

John inherited his father’s farm and they all thrived there. Until the trees started to get sick and they had to cut down the entire orchard. She’d begged him to spare the old pear tree that held so many memories and he’d allowed it on the condition that it lived. She’d kept careful watch over it until it was certain the tree would live. As she’d watched the tree, it had almost been like something protected the tree, something unseen. In any case, she was grateful.

That was when the stone barrier had been erected as a sign that the tree was to never be cut down unless it was dead. John had even built the benches around the tree for her when she became unable to sit on the ground. It was on one of those benches that he’d slipped away in his sleep, leaning against her shoulder.

She was unable to stay after that and had moved in with her oldest daughter where she helped as she was able. The years passed and it began to seem she would out live each of her children as they started to die. One in an accident, one to sickness, one to assault, and one of simple old age. All that was left to her was her youngest son.

With a sigh, she lowered her head to her chest. She was ninety-two today and had finally come back to see the old tree. She knew this would be the last time she looked at it. “It’s been a long time, my dear friend. I pray you live to see my great, great grandchildren and I’m grateful for all the wonderful times and even the terrible times we’ve had over the years. My youngest son and grandchildren will have to tend to you now.” She looked back up at the pear tree with glistening eyes and a sad smile. “Good-bye.”

She didn’t rise from the bench, though. Instead, her head lowered to her chest once more and she drifted off to sleep in the shade of the tree that soon seemed to droop with an air of sadness. An hour later, a man with brown hair and blue eyes, approached the elderly woman.

“Mama? It’s time to go now. You’ve been out here long enough.” He said softly, but received no response. “Mama?” He knelt in front of her and gently tried to wake her, but she would not wake. With tears in his eyes, he softly kissed her cheek, and then gently picked her up. He paused to look at his mother’s beloved tree and it seemed to droop with its own grief. “Thank you for watching over her.” He said softly before turning away and leaving. The breeze gently brushed the branches of the old pear tree that now stood alone.

Its stone wall was left in place as were the benches, both carefully maintained, and eventually a new pear tree was planted as a family memorial. Perhaps one day someone else will come and make new memories under the pear tree.

I've always loved stories, both reading and writing. I always have a story in my head. I've been wanting to make money with my stories and decided to give Vocal a try. I hope you enjoy my stories!

More stories from Sapphire Blackgaard and writers in Fiction and other communities.