There is More Than One Way to Do Every Thing

by Steve Kravetz 10 months ago in Short Story
Report Story

Old Critters Donot Get to be Old Without Being Clever Themselves 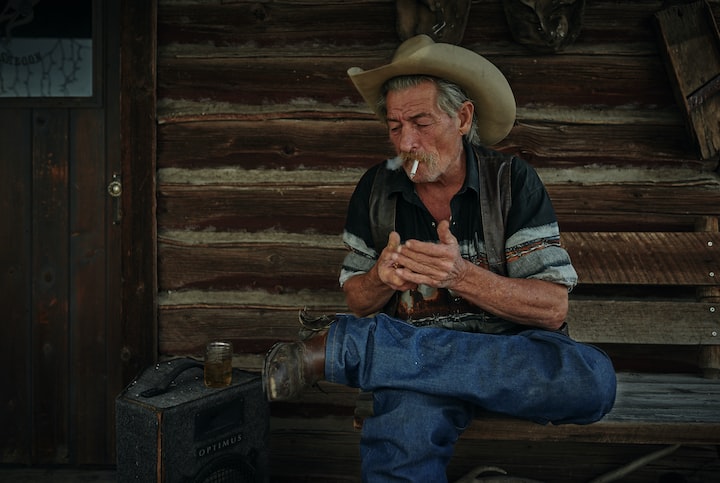 I guess for a old cow hand, who spent a better part of his seventy year old life, observing Mother Nature, her beauty and her strengths, Old Jake Wadworth thought, He had felt, and seen, just about every thing, that one woman could throw at a person. Boy was he ever wrong.

Jake over the years had worked most of West Texas's and New Mexico's large ranches, looking after live stock, doing what ever maintance the property or equipment needed.

Being a cowboy was never not an option inhisy family, whose members have been living in Texas since right after she became the twenty eight State in 1845. So a cowboy he was.

This one particular day was just like a thousand summer days before it. Jake arose early before sun up, grabbed a couple of biscuits of the stove, pored himself a hot cup of coffee and headed out to get as much of the days work done before the sun got too far up. If you ever stuck your head in a four hundred and fifty degree oven and hold it in while trying breathing at the same time. Well, you just begin to get what it feels like during August in West Texas. Not a cloud in the sky, or hardly a tree to find any shade under.

Returning came back to the kitchen about one for a late lunch, and a short nap. By two he was busy changing tires on one of the ranches tractors. By four o'clock that afternoon, Jake still had to finish one late day chore before his day was to be over. The far north end pastures had not been inspected in awhile, so that was his destination that afternoon.

Old Jake and his equally old horse rode out taking in the baron scenery that filled their horizon and continued once there, with another quick look around before getting to what he was here for, to follow the fence lines. A job most cowboys hated but so very important. If any of of the barb wire was broke, or fence post down, the live stock could get out and be easily prey for preditors which their were several. As luck would have it, only one post was bent down and a easy fix. The barbed wire in a few spots needed attention, but nothing serious that he could not quickly repair with a few three foot pieces to weave back in place.

The sun was now still high enough in the setting sky that though the temperture had dropped from one hundred and six degrees down to a balmy ninty six degrees, it was still hot.

In front was the old spring feed stock tank. Now a very inviting looking destination. 'Why not'? he thought, a quick dip to cool off before starting back sounded like a perfect plan, to him.

A long the far end of the tank along it's edge grew a small group of trees mostly Cotton Woods and Wheeping Willows. So thats where they headed.

Jake had tied the horse to a tree close enough that he could drink from the water, and had sat down on a fallen log, begining to take a boot and sock off. Just as he had started to remove the other boot he looked up across the water and saw movement along the fence line far off. The trees gave them some cover, so he just froze and waited. As the animal came closer and closer, it was apperent that it had something bright white in it's mouth. By the animals size and gate he was pretty sure it was a coyote with a rabbit in his mouth.

The animal was still far enough away that every thing was blury. So Jake just sat still and waited patiently, Most people who spend alot of time out doors in nature learn over the years of observation, that animals have their own time clocks and with time all good thing come to pass. So too with this coyote. Soon he also noticed that it was not a rabbit in his mouth but several cotton bolls. The ragged coyote slowly approched the water, then took a long look about. Seeing nothing threatening he walked to the waters edge, slowly turning around and backed in to the water up to his knees, then stopped. Nothing happened except the canine seemed to have froze in the water. After ten minutes or so he begain continuing his descent futher into the deeper water. This time he stopped as the water came to his belly, and again he took the staue pose for more than fifteen minutes. Jake just sat as still as he could, not believing what his eyes were viewing infront of him. The next move was back, so now only his head was above the water line. Tick, tick went the clock, and not a muscle moved. Finally he backs up so only his black nose and the white fluffy cotton bolls were being seen. The ranch hand totally confused by what his is seeing and beginning to think he is viewing a mirage. After what seemed like an hour the canine jumped out of the water , tossing his head and fling the white fluff in his mouth far away from him. With great satisfaction he walked totally out of the water, shaking his body just like his dog brothers would. He looked around again, took a long draw from the pond, then headed back up the fence line from where he came.

Jake sat dumb founded, 'what did i just see'? he said to himself. As he looked over the water where all of this just happened, nothing was left to prove it except the floating cotton bolls. Now rushing to put back on his feet, the sock and boots, then headed to the waters edge. Easy to spot, the sill floating white bundel was now just a foot from the shore. He took a quick glance, then a double take back. "Oh my God," and from deep inside him rose laughter, and no way could he stop. Before him was the very cotton boll that came out out of the coyotes mouth just moments before. Now it was covered with moving black spects. Ticks and fleas were covering the whole area not under water. In all his years he had never seen a animal rid themselves of invaders like this before.

So today, if you were to ask that old cowboy," Have you seen every thing," his reply, I am surly be a simple.

More stories from Steve Kravetz and writers in Fiction and other communities.