The Summer of The Swarm

by Leigh Hooper 2 months ago in Short Story 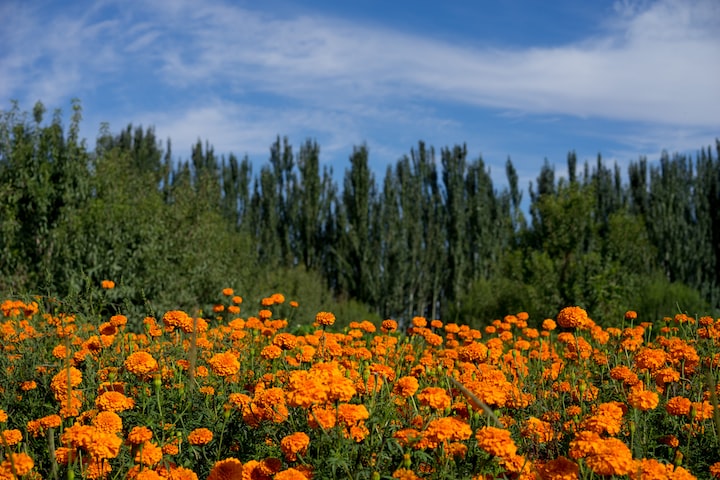 Photo by lauren barton on Unsplash

Tally, a year and four months after finding her mother in the Swarm, makes her way into the edge of the forest. Her dog, unironically named Cat, walks beside her. The long grass rustles under the dog’s swishing tail. Bringing up the rear of the group is Tally’s newest and only friend, a guy who calls himself Chip. Chip is the only survivor from the hospital gang Tally rescued all those eighteen months ago, and he’s his only family member yet to get bit. He falls in line behind Cat, carrying the supplies.

It’s the height of summer, and the Swarm is the biggest it’s ever been. The city, now renamed Swarm-Central by the trio, is now buzzing with the undead, but a ghost town to any humans. It’s overrun with shuffling hoards of snapping teeth and dragging limbs. At night, the groans carry in the wind and leave Tally with goosebumps.

“Is it ever going to rain?” Chip whines, and Tally holds back a laugh. Chip, although four years older than her, is a cry baby. His scrawny build, patchy beard and gangly legs make him look like the least survivor-like person Tally has ever seen, but he’s made it this far and that’s good enough for her.

“Nope. Let’s keep going.” Tally says, taking a sip from her water bottle. It’s river water, and tastes like crap, but at least she’s keeping hydrated. She passes the bottle to Chip, who in turn takes a sip. He pours some on Cat’s fur and she shakes it off, relishing in the cool feeling.

Truth be told, Tally is having fun away from the city. The Swarm is easier to deal with here, with only a couple of strays a day crossing their path. She’s good with the bow now, and her arrows never miss. Chip has proven himself useful with some knives, and Cat barks when there’s danger up ahead. They’re a good team, and Tally can’t help but smile. A year and a half ago she had been all alone, feeling like the world left her as the only human to not be a part of the Swarm. Now, life was different.

With the sun high in the sky, keeping cool is the main priority. Before leaving the city the trio raided an old charity store at the edge of the city, a place where even the Swarm didn’t want to shop. They found some ill-fitting shorts for Chip, a couple of t-shirts that were a few sizes too big, and a “I’m A Sexy Grandma” cap that Tally took a liking to. It was the silly things that made the day count now, and if Tally’s group ever encounter another survivor, she wanted them to know she truly was the sexiest grandma out there.

Their summer gear makes the heat more bearable now, and the summer breeze offers no relief apart. It just shakes the trees as the trio pass, and Chip and Tally take turns in trying to name all the different species.

“Maple? Oak?” Tally guesses, “I was never really good with this stuff as a kid.” She slaps the nearest tree as she passes and continues on their journey. The trio aren’t heading in any direction, just moving away from the city, trying to enjoy the heat, and looking for a place to set up camp. They zigzag through the trees, letting Cat lead the way as she explores the unknown forest.

Behind Tally, Chip lets out a small laugh. “Okay. How about eye-spy?”

The game lasts for about ten minutes, naming things they can see. A tree, a flower, a dog named Cat. It’s all fun and games, and for a minute Tally struggles to know what Chip is looking at.

“I spy with my little eye, something beginning with S…” He repeats again, and Tally just can’t seem to find it. Her eyes track the trees, craning her neck back towards the sky in hopes to see a bird. She’s about to give up on her guess when she hears the familiar, tell-tale signs of the undead.

It doesn’t take long for her to find it then, her eyes locking onto the disgusting corpse at the base of a large tree nearby. The whole body is practically overgrown with grass and moss, to the point where the tree and the bone have become one. The thing can’t move, and Cat sniffs at it cautiously.

“Cat, get away!” Chip hisses, pulling out one of his knives. He moves towards the Swarm member, ready to kill it, but Tally grabs his arm.

“Hold up.” She tugs the boy away, wanting to look at the body closer. For some reason, Tally finds it mesmerising. The milky white eyes, the constant chewing jaws, the dull and decaying skin that is tinged green. Tally can see the ribs of the undead, the skin completely worn away. Weaved between them is the most beautiful thing Tally has ever seen.

The yellow flowers are striking, sticking out of the undead body in a jarring yet wonderful way that makes Tally smile. They’ve woven themselves throughout the skin, some big and flourishing, while others are still small, only just poking out of the ribcage. The mixture of orange and yellow flowers seem to glow in the sunshine. It’s the symbol of the unnatural versus nature, and the undead lost the battle.

Tally stares for too long, before realising Chip is looking at her with a frown.

“You’re going to laugh at me, I know.” Tally gives him a look, and he prompts her to go on, “But I think it’s beautiful. The whole damn world is plagued with the Swarm, and mother nature has reclaimed him. He’s a part of nature now. Feeding bugs, the soil. It’s like mother nature is doing us a favour. One less Swarmie that’s able to kill us.”

For a second, Chip doesn’t say anything. He just stares at the yellow flowers that have grown out a man’s chest and then shrugs.

“Yeah I guess you’re right. Pretty cool, but also pretty gross.” Chip stares for a second more, then makes a conclusion with a satisfied nod. “Nice.”

The trio decide to move on, towards a new adventure they don’t know is waiting for them. Tally, already daydreaming of what they’re going to do tomorrow, has a smile on her face. For many, these days were the end of the world, but for Tally her world was just beginning…

For those of you interested in Tally's little world, her story starts here, in "The Swarm":

This is my fourth SFS Challenge entry, and so far my favourite out of all the SFS Challenges I have done! If you want to read my 3nd entry for the Brown Paper Box Challenge here it is:

If you enjoyed this little story too then make sure to leave this article a little heart to show your love! Tips are greatly appreciated but no pressure!

Receive stories by Leigh Hooper in your feed
Leigh Hooper
Read next: THE BROOCH