The Squawking of the Barn Owl

by Trisha Dunbar 4 months ago in Short Story
Report Story

Owls are not just wisdom, but the announcers of death... 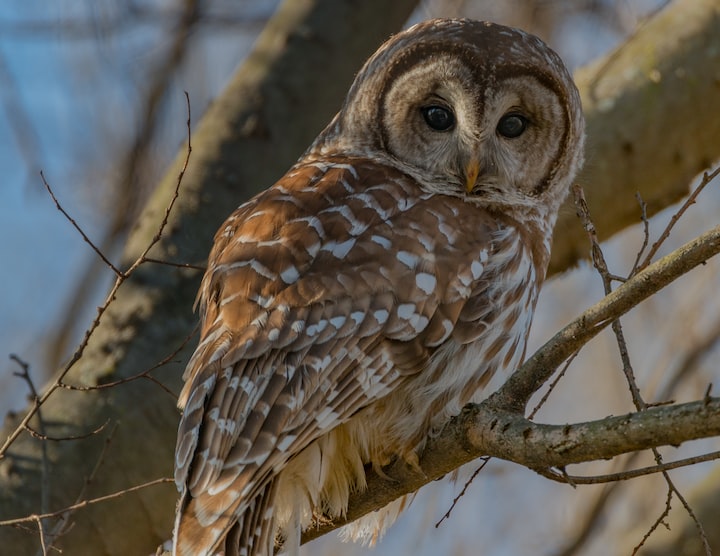 Photo by Richard Lee on Unsplash

The small bedroom looked rather cosy, but was filled with a strong musky smell that was overbearing.

"It's nearly time," a son said to his wife and children who were all gathered around a bed. As he held the delicate hand of his dying mother he noticed they were being watched through the window...

Each breath was now a battle for the old lady, but she looked with pride at her beautiful family. In her final hours, she would not be alone. She no longer feared death, she welcomed it. Her legacy was her family.

As she turned to see what her son was looking at she noticed a barn owl perched on the window ledge. She smiled and her last words to her family would be... "It's him, he's here."

Owls are often seen as a sign of wisdom, but the traditional meaning of the owl is as the announcer of death and transformation. Visiting the families of those that had lost ones. They are the bringers of hope and transformation during the darkest of times. They are sacred, spiritual animals.

However, the owl that was watching the old lady with intent wasn't just any old barn owl...

As a child, Beatrice had saved and raised a little orphaned barn owl. His mother had been killed by a fox. He was all alone.

Beatrice knew all too well how that felt, she had moved from London to a stranger's farm on the outskirts of society during a war. Her family never returned for her.

Her father and older brothers had been killed in action in Europe. Her family home bombed during a blitz, her mother's body was never found.

The family that had taken her in had been kind. They were not able to have children of their own so they adopted Beatrice and the farm became her home.

The little rescued barn owl was named Oscar. A rather fitting name for a proud-looking owl. He lived on the farm for a couple of years before he flew away. Beatrice missed the owl dearly but knew he would return one day.

And return he did, almost a year later. With a family of his own. He introduced them to Beatrice. who cared for them just like she had done for Oscar.

Every year after that the owls would always return to the old farm for a few months, generations upon generations for over 60 years paying a visit for gradititude of a good deed.

But slowly the countryside was built upon to make way for more houses and roads. The owl population started to dwindle and although not a globally threatened species. The hustle and bustle of a newfound town seemed to impact upon the breeding of this family of owls.

Upon the 70th birthday of Beatrice, the barn owl visits were sadly no more. For over 60 years they had returned to the farm. It was the end of an era. The beautiful friendship between a human and a family of birds.

Now, almost a decade later, a barn owl with the same unique markings as Oscar was perched upon the window ledge, There to comfort and guide Beatrice to the next realm.

As the final breath left the body of Beatrice the owl looked to the moon and let out a high pitch squawk.

The man looked at the owl as it prepared itself to fly off. He knew at that moment that his mother had taken her last breath. He took comfort that Oscar the barn owl was the one that had come to escort his mother.

More stories from Trisha Dunbar and writers in Fiction and other communities.