by Amanda Wilson 11 months ago in Short Story
Report Story

Of all the magical gifts, Stormy inherits the most coveted of abilities 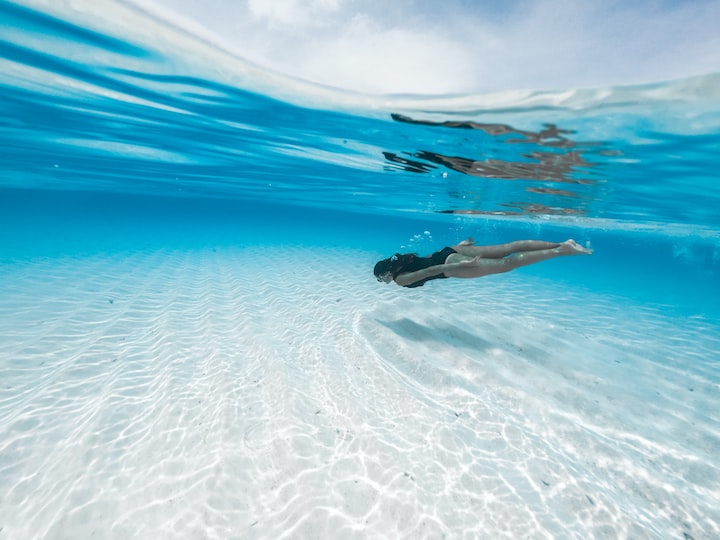 Photo by Zidhan Ibrahim on Unsplash

Stormy's long, lean, body bulleted through the water, her strong legs propelling her beyond the bay and into the open ocean. She knew her gift had to do with the sea- her grandmother always told her she was more salt than sugar and she had a feeling this wasn't just a jab at her temper. As the ocean floor dropped, Stormy slowed her pace. She looked toward her home, the island key of Sol, allowing herself a moment of contemplation before taking the plunge. Her dream last night told her what to do, but did she trust her magic well enough to take the dream seriously?

Shaking her head and narrowing her eyes, Stormy turned to the horizon, her eyes the shade of the sun glaring back at her as it drooped lazily over the edge of the world. She would make it down and back before Lady Luna, the moon, triumphed over the sun. She had to -her life depended on it. She quickly twisted her hair into a long braid so the silky black curtain wouldn't get in her way once she reached the sea bottom, and started fussing with the canvas bag slung across her chest, but stopped and scolded herself aloud:

Stop stalling! You're a Storm! You charge forward, you don't slink and you don't shy away!

She was afraid of the sea, once upon a lifetime ago. Her father wouldn't hear of it, though. He took her out in a canoe, told her why he named her Stormy, and threw her overboard. She panicked and splashed about for a moment, only to realize she was treading water. No one told her how- she just knew, as her father suspected she would. Everyone born on Sol had two things in common: they had gold eyes, and they were as comfortable in the sea as they were on land. Some parents coddled their kids, letting them wait until they were as old as 5 or 6 before taking them to sea to learn to swim, but Stormy was barely 2 years old that day her father chucked her into the sea. Her mother was pissed, her grandmother laughed, and Stormy beamed with pride. She has been swimming every day since.

Since she turned 18, however, her family was starting to worry she was spending too much time splashing around the sea. Her magical gift hadn't made itself known yet, and they feared if she didn't take the time to learn what it was that she'd be doomed to be a Mundy- a mundane human. Her father, Ray, could shapeshift into a water dragon. Her mother, Mina, could communicate with spirits of land and sea- of the water itself, for that matter. Her grandmother had a few magical gifts- one of the five known Multi-Mage's in Sol's history, and, ironically, the only member of her family who didn't worry about Stormy's magical awakening. Quill, the matriarch of the family, had the gift of Sight, and the ability to Shift. Her son inherited his gift of shapeshifting from his mother, but he could only transform into the water dragon, while Quill could be anything she wanted. She earned her name when she was 18 months old and turned herself into a parrot. She plucked a feather from her tail, then shifted back into the babbling baby she started as. This was how her mother found her- giggling, playing with a feather, holding it like a quill. With such a strong magical background, Stormy's family fretted for her.

The afternoon before Stormy's 'mission', during lunch, Stormy's parents started their lecture about how Stormy should see the shaman, that she didn't want to be exiled to the Luna key as a Mundy, and just when they got to the part of their shpeel advising against swimming every evening, Grandma Quill spoke up.

Stormy is not, nor will she ever be a Mundy. I'm surprised it never occurred to you, Mina, seeing how you can talk to the water and all, that it's possible that Stormy must be in the sea to realize her magical ability.

Stormy had to stifle a laugh, as her parent's faces were priceless. Then Quill's eyes locked onto Stormy's:

Take a nap. When you do, you'll dream. When the dream comes to an end, make your way to your world.

Without elaborating, Quill stood, pointed a finger at Mina and Ray, threw a wink at Stormy, and strode out of their cottage. Stormy's parents were too stunned to respond. Stormy flashed them a grin, pushed away from the table, and practically skipped to her room to do just as her grandmother advised. She wanted her magical gift as badly as her parents did, but she always wanted the water more. The thought that the water was the answer, however, excited her.

Her lungs screamed, her muscles felt as though they'd tear away from her body, but she kept swimming down. Down. Down.

a voice in her head advised...

Brother shark must keep swimming- should he stop, he will die. Swim to live, swim to breathe, swim to your birth.

So Stormy swam. She kicked fiercely, knowing instinctively that if she touched the sandy bottom, her Gift would be born. Her heart pounded in her ears, and shadows crowded her vision. She gave one final kick, resolving to hit the bottom or die trying, when her fingers brushed the silty floor. Rather than stopping, however, she kept moving. She was pulled into the sand, breaking through the other side in a shape unfamiliar to her. Her body was large, sleek, undulating. She turned her head to look at her body...

Stormy said a quick prayer for protection, threw it up to Cousin Cloud to carry the words to her ancestors, took a deep breath, and dove into the water. She had to swim 20, maybe 30 feet straight down to reach the ocean floor. Her aim was toward a circle of pure white, strangely smooth sand- there were no striations from the current, no tracks from lobsters, just a perfectly smooth circle. It was because of this strangeness that Stormy knew she had found the right spot.

Her ears popped as she reached the cool depths, and her lungs started aching. She could make it- she's gone deeper, and held her breath for much longer. Stormy furrowed her brows and kicked harder, her sculpted arms pulling her through the water towards her target. When the floor was a few feet away, Stormy's line of sight dimmed. The light was fading- how could that be? She wondered, knowing sunset was another hour away. Regardless, darkness descended with every kick, every stroke. The floor was almost within reach...or was it?

She could barely see her hands, much less anything beyond them. Muscles in her legs and arms screamed in resistance as she ordered them to move faster, harder. Her lungs were reaching their limit- if she didn't make for the surface soon, she would take the breath of death. Shaking the thought from her head, Stormy recalled the voice from her dream:

Swim to live, swim to breathe, swim to your birth.

She stretched out an arm and gave one final kick, closing her eyes in desperate hope of reaching something- anything. Her hand broke through a curtain of silk, and all pain ceased. Her muscles no longer screamed, her lungs were no longer frantic.

Stormy opened her eyes and turned her head. She was a shark! She was a shapeshifter, like her father and grandmother!

That voice! Stormy tried to speak- her massive jaws moved, but no sound escaped. She directed her thoughts to the speaker:

Who are you? How are you in my head?

You just turned into a shark and that's what you ask?

The voice chuckled, and as it did, the water around her rippled.

It was the water! She could shift, and she could Speak. She was a Multi-Mage, like Quill. Stormy turned towards shore, her thick body propelling her through the water like a bullet. When the ocean floor rose to meet her, she willed herself back into her human form. Gracefully, she stood and ran, eager to tell her family they no longer needed to fret.

Writing is my passion, my art, and my career. Through writing I share my experiences, lessons I've learned, and stories I create.

More stories from Amanda Wilson and writers in Fiction and other communities.