"The thirteenth. I promise." 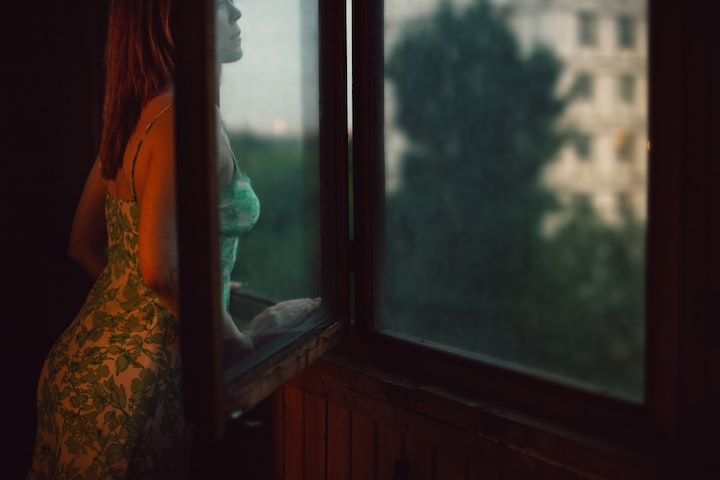 Photo by Marina Khrapova on Unsplash

Three in succession. It used to be that such a noise would bring her comfort, as the small pebble hitting sharply against the delicate glass pane greeted her and guided her to its master down below. Even now, memories crept their way past her defenses and up to the surface of her mind. Memories of sliding through the window, falling blissfully as the wind rose up to meet her, and two arms catching her before she could unite with the earth in a fatal embrace. Most would be horrified by such a descent, but knowing what awaited her below made the fall feel as though she was floating. She knew no danger would reach her as long as those faithful hands remained outstretched.

She shifted restlessly beneath the layers of warmth that she had stacked upon herself when she settled in for the night. She bid herself to ignore it. If she could only ignore it, the noise would fade so that it remained alive only in her mind.

Ignore it and he’ll leave.

“Tap tap tap,” the pebble called against the window. Sounding ever so urgent, one might imagine it was an important business man, hemming and hawing at his watch impatiently.

She sighed in disdain. The 13th. 1 am. As promised. If anything, she could certainly not call him inconsistent

Was it louder than before? It almost screamed at her in its intensity, its insistence.

She growled in frustration at the sound and pushed her sheets aside, ignoring how her past self had tucked each layer around her tightly to stop her from doing precisely what she was about to do.

“What?,” she whispered pointedly into the blinding darkness as she flung the glass aside within the frame, a smooth green stone landing with a harsh thump against her floor.

She was met with a sharp intake of breath below and a moment of silence thick enough that only the strongest will or the sharpest blade could break through. And when she thought the silence would never cease—

“God, you’re as beautiful as ever.”

She sighed at the sound of his voice, though she was unsure whether it was in relief to hear him or in displeasure that he had returned once again. His face was invisible amongst the inky black, but she had come to expect that. Just a voice in the darkness.

“You know you can’t be here. You know the rules. They’re trying to keep it from spreading,” she recited from memory, feeling rather like a needle stuck in a loop on a broken record. “If they catch you, or, God forbid, both of us, we could be…”

“We’ll be fine! We just have to make sure we’re not caught,” he retorted. “Besides, we made a promise.” A sly, sumptuous grin slowly dripped itself into the sound of his voice. “It’s the 13th, remember?”

She did remember. Though, by God, she would trade everything she had, her very soul, for the chance to forget.

“Don’t tell me you forgot? And here I was thinking you had such a great memory—"

“I don’t care, ok. Just go, please,” she said, though she hated every word as they slipped past her lips, a thick and bitter feeling gushing over her tongue as remorse swelled heavily behind her eyes.

“You don’t want me here?,” he asked, though it was somewhere between a question and a statement.

I do! The angry thing inside her longed to cry out, the words squeezing inside her lungs, squealing like hogs in a pen. But the script was written for her, the words copied and pasted across her lips which crackled like ruined pages of some ancient book. She had tried, once, to erase the past, to remove permanent ink from the pages she’d so stupidly stained, and to rewrite the words she had said that night. It had done nothing but make it all begin again. Three taps. Three taps on repeat until she played the pebble’s game.

“We’re to stay in our homes. We’re to remain at a distance of 5 feet at all times.” She steadied her voice as much as she could.

“Don’t recite those damn rules to me” he said softly, but with a sudden and quiet venom. “They do nothing and you know it -”

“We’re to lock and seal all windows and doors.”

“And we’re to report those who cannot comply.”

“I asked if you want me here.”

“We’re on lockdown. You know that. You know what will happen if we are found out. Even by my mother. No, especially by my mother. They will follow the rules no matter the cost.”

“That’s not the question.”

She braced herself for what came next, it was the hardest part, the cruelest play in this hopeless chess match. It made her wonder what would have happened if she had only given some other reply, if she had hesitated for a moment and answered as she had truly wished to. Perhaps it wouldn’t have made a difference at all and it was only a matter of time, but hot tears seared lines down her cheeks even so. Because nothing may have changed. But maybe, just maybe, it would all have been different, and this haunted nightmare wouldn’t ever exist. She wished she could change her answer, but it was useless.

“I don’t want you here,” came the rotting, filthy words through the gaps in her teeth, her voice breaking past the streams that flowed at the corner of her eyes.

A silence like shattered glass and dreams held the air just long enough for her to catch her breath.

And then he walked away. She could not see, feel, or hear him do so, but she knew. Something in the air shifted, crackling before it snapped. And then he was gone.

“I miss you,” she whispered to the wind, knowing full well it was as deaf to her tears as it had been to her pleas for his safe return to her arms, her hands, her lips.

The authorities had finally picked up their enforcers and buried the lockdown a few months ago. They buried him with it.

Glancing down, she stooped to grab the green rock on her floor. She could not bring herself to get rid of it. Instead, with a kiss, she threw the pebble among the grass where he once stood waiting.

“The thirteenth. I promise.”

She slid the glass closed on the night, and the memory who roamed in the dark.

The world is poetry and I've fallen in love with its words.

I'm an artist in many forms (actor, singer, visual artist, writer) who adores good story. I'd love to create worlds for other people to escape into even if for just a moment.

More stories from Bianca Christiansen and writers in Fiction and other communities.