The Bull on Wall Street

by Avril Doucette 10 months ago in Short Story
Report Story 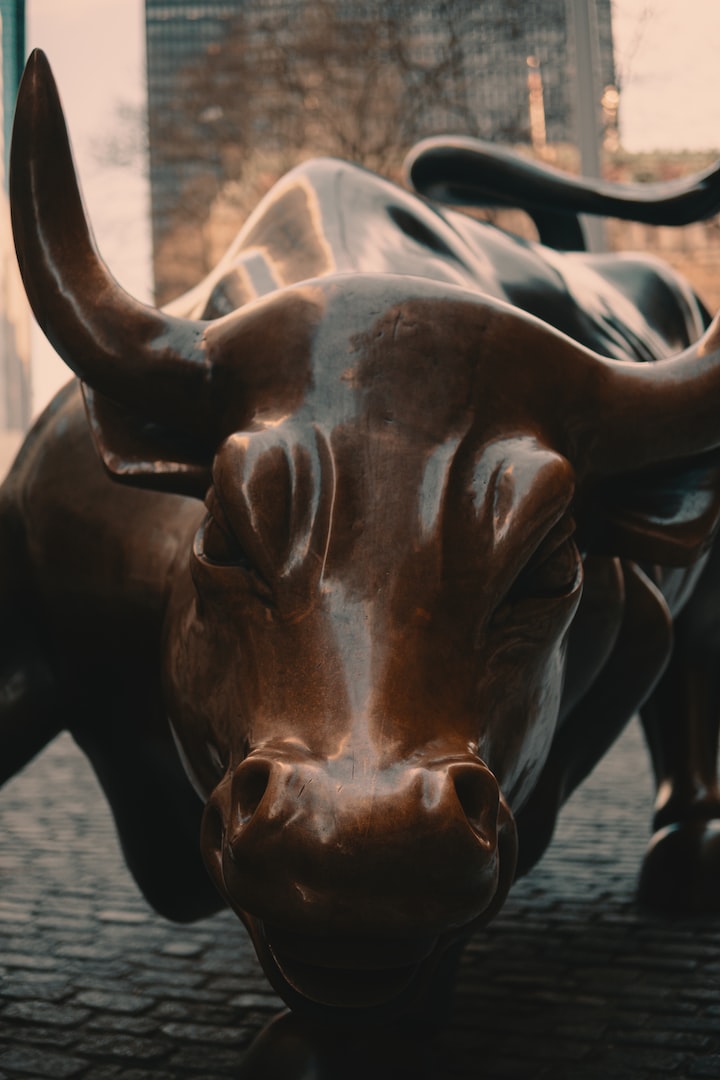 Photo by Alec Favale on Unsplash

DEFINITION of The Charging Bull.....The Charging Bull is a bronze sculpture by artist Arturo Di Modica that stands near Wall Street in Downtown Manhattan. The 7,100 lb charging bull, a forceful allegory of market optimism, has become the symbol of Wall Street and the Financial District and one of the most popular tourist attractions in New York City.

John walked the streets of New York and looked down the quiet New York Street. Soon however they would be flooded with people, who would be walking, cycling and running to work. They would head to the Wall Street and Financial District. After all they were all in Manhattan, even people who lived outside of Manhattan would flee downtown to the old desk. Chained to their desk and chairs to make the next best investment, deal, real estate, tech or marketing discovery. It was a tight community even though Manhattan was huge, word spread quickly about who to watch and details about their lives and business.

John looked over the skyline and had seen the high towers that sprawled along the sunrise. The sunrise poked out from the Buildings, reflecting off the glass onto other structures in the Financial District. The buildings seemed to all bask in the golden sunrise, John saw it as a sign that a lot of money would be made today, call it an omen. The "golden sunrise" signaling a golden day...blessed by the god's or whoever you want to call it. John would take a positive sign today, it has been a tough past few weeks.

He walked through a heavy chestnut door, stepping onto cracked tiles until he reached a wooden counter and an eldery woman standing behind it smiling. John had loved to walk in and feel the warmth and happiness every morning from the Elderly Woman to start his day. John had been a great patron of the Cafe for the past 5 years. He even walked the extra few blocks to come to the cafe. She smiled and handed John his latte, John tipped well as always and wished her a good day. He walked back out through the Chestnut Door, to continue on his morning walk to work.

Being caffeinated usually made John smile, next to making a decent commission during his work days. He loved the rush of closing a client, adding them to the excel spreadsheet and then emailing the boss to tell them how amazing it was to close another client. They would usually email John back and call them to the office to congratulate him on the success. If it was a larger client that would purchase a larger value, John would get invited out by the boss for lunch the next day. That meant an amazing steak, potatoes and wine.

John smiled as he walked and thought to himself about the steak and the way it tasted. He already made the decision right then, today he would close a larger client so that he would be invited for a steak tomorrow for lunch. He sipped his latte happily, still thinking of that delicious $150 lunch he would be having tomorrow as a result of his hard-work. John was persistent and when he set his mind to anything he achieved it. He looked over the top of the coffee cup lid and saw a bronze figure shimmering.

He took the same steps coming closer to the bronze statue, this was John's favorite part of his morning and why he had left home so early. As he neared his favorite park bench, which he sat at to stare at the Massive Bronze Bull by his work. He sat down, began sipping his latte and stared at the Bull. It usually hypnotized John for 15 minutes as he would sit and finish his delicious latte. It was a ritual he had developed over the past five years and had paid off for John, so he kept the tradition.

John got up from the wooden park bench, walked over to the nearby trash can. Continued down the sidewalk, now it was more hectic as John had walked down the street. People were preparing for their day in the Financial District, suits and briefcases filled the sidewalks now. People talking loudly on their phones about business or personal lives. John walked quickly and tried to avoid the crowd as much as possible. He slowly saw his building approaching, as he flew by the men and women in suits.

He quickly crossed the intersection as he saw the cars stalled and stuck at a light. He moved in between the Yellow Cabs until he crossed and stepped onto the sidewalk. He glanced up at his building before entering in through the side door. He walked through the scanner, flashing his identity badge to the morning security politely. He walked to the nearby elevators which just opened in time for him to enter. He reached over and pressed on 25, the elevator let a few people off on different floors on the way up. The elevator flashed 25, John bolted out of the elevator and walked to his office. It wasn't anything too fancy, just a chair, desk, lamp, telephone and computer.

John sat down at the desk, turned on his computer and then checked his phone for messages. He then began to comb through his sales and closing list, who would be his big closer of the day. The one that would get him the invite with the boss to lunch tomorrow ?? He immediately saw a name on the list that seemed to jump out at him. John picked up his phone and dialed the number, which had been immediately answered by the secretary. The secretary said that the owner was in and available that she would patch him through. John got excited as that had rarely happened first thing in the morning.

John heard a man's raspy voice through the phone. John immediately remembered this client had a daughter who liked horses. He asked if she had been out to see the races lately, the owner had replied that he had been too swamped with work and that's why his voice was so raspy. He's been working so hard, John quickly had an idea hit him. John told him he wanted to solve two of his issues, that he could hire John and eliminate a lot of his problems and that the company had free tickets he could send over for him and his daughter. The owner got really quiet as John listened a bit nervously, John then heard him say that he would love to hire them for two times the normal work and be happy to take the tickets.

John smiled and quickly replied that he didn't want to take up too much of his time since his voice was raspy. He would then send the contracts over through email for the owner to review. The owner agreed and thanked John for all his great service and thinking of his daughter. John jumped out of his chair as he hung up the phone. Then he immediately emailed the boss to explain that he closed a huge deal and needed two free company tickets to send with the contract of the deal for horse races, as that's how he had closed him and he hit send on the email. Immediately John's phone rang, it was the boss who asked John to join him up in his office.

John got up from his desk with a huge smile on his face. He could already taste the delicious steak, and wine in his mouth. This morning's ritual paid off for John. Today was the day John thought it would be and more.

More stories from Avril Doucette and writers in Fiction and other communities.