The Battle for Dominance

by Edison Ade 9 months ago in Love
Report Story

It was a chilly Saturday morning in September when John got out of bed to get ready for his important meeting with potential investors. 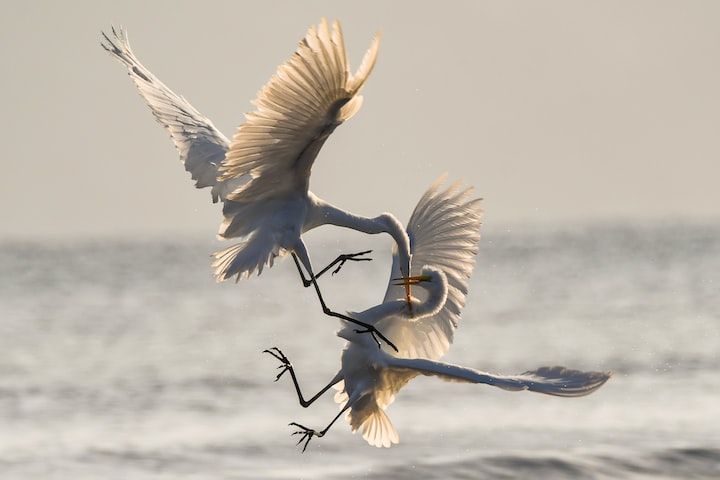 Photo by Chris Sabor on Unsplash

It was a chilly Saturday morning in September when John got out of bed to get ready for his important meeting with potential investors.

John had been looking forward to this meeting all week. He was confident that he could impress the investors and secure the funding he needed to take his business to the next level.

As he walked outside, John noticed the sun was shining and the leaves were starting to turn yellow and orange. He took a deep breath of the crisp autumn air and smiled. As he walked to the subway station, he thought about how excited he was for the meeting.

He boarded the train and took a seat, thinking about all of the different ways he could pitch his business idea. The investors were sure to be impressed by his plan!

Suddenly, the train came to a stop and John heard someone announce that there was an emergency up ahead. He sighed and got off of the train, deciding to walk to his meeting instead.

As he walked, John couldn't help but feel a bit nervous. What if something happened and he didn't make it to the meeting on time? He prayed that nothing would delay him.

John arrived at the meeting on time despite the delay. He was greeted by his colleagues with relieved expressions. "We were starting to worry," one of them said. "Thank goodness you're here."

The investors finally arrived and John began his presentation. He talked about his company's history, its current successes, and its future plans. He outlined the future plans for the company, emphasizing how important this new investment would be. But as he talked, it quickly became clear that the investors were not impressed. In fact, they didn't seem interested at all! John felt his heart sink as they decided not to invest in his company. He was so sad - it seemed like every time he tried to make something great, people told him it was terrible. Maybe he just wasn't cut out for this business thing after all…

John had always been a bit of an introvert, preferring to spend his time alone in his workshop, tinkering with new inventions. But when he came up with a brilliant new idea for a company, he knew he had to share it with the world. He just didn't expect all the rejection from investors, who told him his idea was awful and wouldn't see the light of day.

Out of desperation, John decided to go get a job and forget about his invention. But every time he would interview for a position, he just couldn't seem to sell himself. He knew he was smart and had the skills, but something always held him back.

Finally, John decided to go back to his workshop and work on his invention. Maybe if he could perfect it, he would feel more confident when pitching it.

He had always been a bit of a mad scientist, and his latest invention was definitely proof of that. It was a radical idea, something that had never been done before. But he believed in it, and he was determined to make it work.

For months, he worked tirelessly in his garage, trying to perfect his design. And finally, after countless tweaks and revisions, he had created the perfect prototype. Something that could truly change the world.

He couldn't help but feel proud as he wheeled the prototype out of his garage and into the sunlight. It was sleek and looked like it could fly. But would it work? He had no idea.

He climbed into the cockpit and hit the ignition switch. The engine roared to life, and he felt a surge of excitement as he lifted off the ground. This was it! He was finally going to change the world.

He knew that people would be sceptical at first. It was a radical idea, after all. But he believed in it, and he was determined to make it work.

So he pitched his invention to the biggest companies in the world, and to his amazement, they all turned him down.

Yet another rejection from investors, but he refused to give up. When everyone told him that his idea wouldn't work, he just doubled down. He knew that they were wrong, and he was going to show them all.

He knew that his invention was revolutionary, and he was going to make sure that it saw the light of day.

But then he saw the news story about Linda, who had developed a similar product in China and managed to get her first investor. John was devastated. He'd worked so hard on this project, and now it seemed like he was going to lose out to Linda.

John couldn't help but feel disappointed and bitter. It seemed like everybody else could succeed except him.

John's phone chimed, interrupting his pity party. It was Linda from China.

"Hi John It is so nice to finally reach you," she said cheerfully. "I was wondering if you wanted to work on my project together. I have heard of all the amazing work you are doing and can't wait to work with you."

John hesitated for a moment before answering. He really didn't feel like working on the project with Linda, but he didn't want to seem like a loser either. "Sure thing," he muttered eventually.

"Great!" Linda replied. "I' am taking the next flight to the United States and we can discuss the details"

Linda arrived looking as if she had just stepped out of a fashion magazine. John felt even more inferior when she started talking about all the great ideas she had been working on, but he keep his cool.

"I've been working on some great ideas for the company," Linda said, looking John straight in the eye. "I'm really excited about them."

John felt his heart sink. He had been working on some ideas too, but he knew they couldn't compare to Linda's. She looked so put together and stylish, while he felt like a schlub.

But he didn't want her to know that. "That sounds great," he said, trying to sound upbeat. "I can't wait to hear more."

Linda smiled and launched into a long explanation about her latest project. John listened politely, but he really wasn't paying attention. All he could think about was how much better Linda was than him.

Want to know what happens next? Watch out for Part II. This is the first in a set of chapters. I am going to attempt to write the book by compiling all the chapters and incorporating all your feedback as well.