by Mark Ludas 4 months ago in Short Story
Report Story

"The true revolutionary is guided by a great feeling of love." -Che Guevara 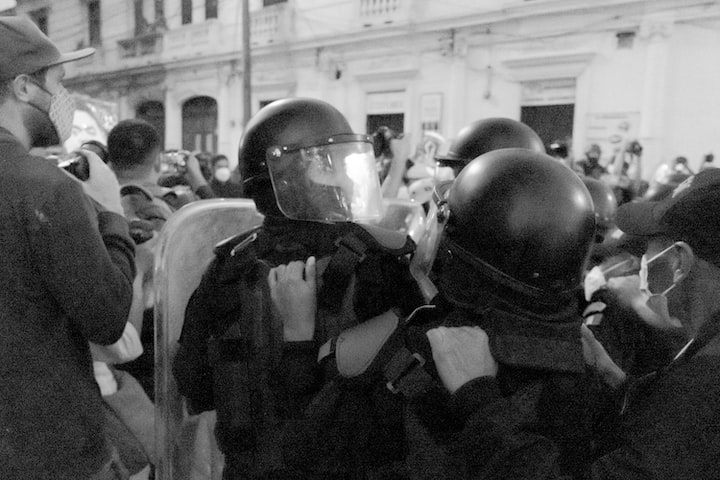 “Come close to me, Riordan,” Madigan said, his head resting on the asphalt surface of the park's sprawling interior. Lying and looking up, he saw the city skyscrapers looming over him like steel and concrete statues: epic, eternalized, and destined to outlive him.

His arm-long hair was strewn about on the ground, among the spent bullet shells and tear-gas canisters, the spilled red paint and pepperspray, and among the blood. The chanting throng, with their broken bricks and banners gripped tightly in wind-chapped hands, continued on towards the center of the park while the platoon of riot police pressed them towards the boundary, attempting to drive them out. Another and another protester fell under the bash of baton or the rap of rubber bullet; each was tended to by someone who loved her, by another comrade.

“Madigan,” Riordan said. He drew the faded red scarf from around his neck and placed it under Madigan’s head, whether to cushion it or to stop the bleeding, he knew not which, but he chose his actions as carefully as his words. “They got you, those fuckers.” He couched one hand in his hair while the other brushed away some falling flakes of ash from Madigan’s eyelashes. “I’m with you.” Riordan learned long ago the uselessness of lies, so he didn’t say, ‘you're going to be all right,’ despite the temptation.

"Somebody help!" he yelled, but his voice was lost in the rising din of yelling crowds, firecrackers, stones landing on shields and helmets, the screams of women being assaulted by armored men, and a small army of drummers pounding and beating and raging the resistance to greater zeal, greater resolve.

“Come close to me, Riordan,” Madigan said again. He reached out; his black-gloved hand fell on the back of Riordan’s neck. Riordan leaned in closely, so that Madigan wouldn’t have to strain and lose more blood, for what secret is worth endangering one’s life?

Riordan still saw the cop in Madigan’s fading eyes, his baton held high like a tree branch, while another raised a can of pepperspray in front of him as though to cleanse a garden of weeds. The liquid spluttered forth, the tree branch came down, and all of his safety gear given away, Madigan was buffeted behind the ear, his long hair splaying out and reaching to the air around him like a flock of birds before fluttering just behind his head to the ground. There was little Madigan could tell his friend now, no anger or confusion, not even fear; many months prior, while inspecting the column of would-be freedom fighters, he’d told Riordan something curious.

“You know, Riordan, when we’re out there, doing what we do against the fascist police, there’s one thing that keeps me from worrying, and someday I’ll tell you what it is. I just hope you have one too. I think you do.”

Madigan watched his friend descend over him, and knew what he was about to say, what it meant, but not what the effect of it would be. In an egotistical way he’d hoped for this day more than any other, for he would never have another chance, another excuse, to tell his friend the secret after what felt like a lifetime of concealment. He had never been able to let Riordan completely into his heart; never could they be as brothers, for the confusion and conflict that continued to complicate Madigan’s conscience even now could only exist between two men who hide parts of their souls. Two soldiers. And part of him felt guilty, for in this secrecy and bitterness was the source of his hunger, his reason for living. It was why he was all right now, though his skull was broken.

“Come closer, Riordan,” Madigan said, “look into my eyes and know that I love you. Know that you are my friend.”

“Of course, I know,” Riordan said, gently cradling Madigan’s head in his palm.

“There is something I need to tell you,” said Madigan, his eyes struggling to remain skyward.

“Tell me anything, I’m right here.”

“I need you to know. It’s the thing that’s kept me on the streets everyday with you, it’s the reason I get up in the morning, it’s the way I live, it’s my freedom, it’s why I fight.”

Then, Madigan’s heart slowly rolled to a stop, as the umpteenth utterance of the phrase that defined his life—‘your wife’—overwhelmed it at last. He heaved his final breath back at the world, and with Riordan’s eyes staring into his, he smiled. His hand fell from his friend’s neck, landing on his chest and clenching into a fist for the last time.

Riordan only watched, his breaths quickening, his eyes squinting as if to bring the fate of his friend into focus. And when he realized that Madigan was dead, his mouth trembled open. His eyes closed as explosions gutted the buildings around them, and protesters began to fight back in earnest with rage. A medic finally arrived, kneeling beside him in the pool of blood and saying "let go." But Riordan didn't listen; he simply held his friend's hand and kept his head elevated, and wept into Madigan’s neck until his tears touched the ground.

I've been writing fiction, nonfiction, poetry, essay, and ad copy for 20 years. Interested in ideas of freedom, reality, and identity. My fave scifi author is PKD.

More stories from Mark Ludas and writers in Fiction and other communities.