by Nati Saednejad 6 months ago in Love

What can appear when hope is planted? 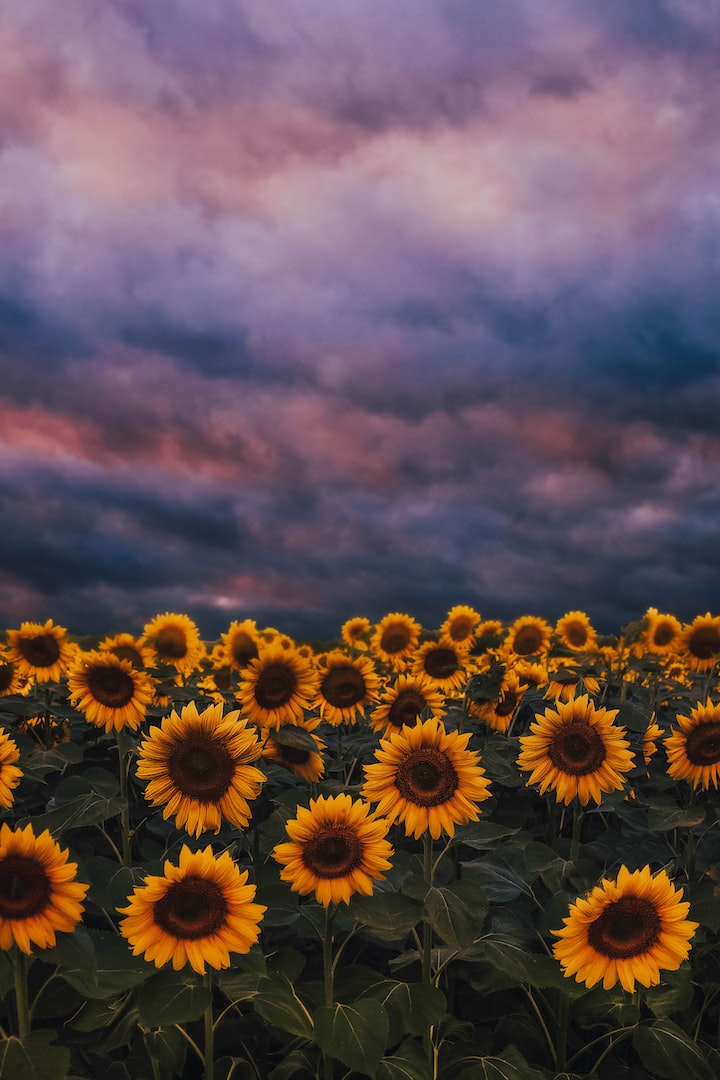 Photo by Gaspar Uhas on Unsplash

It was the cursive that caught her eye first. Ally could've sworn she recognised the swoops of the double 'l' placed carefully in the middle of her name. The paper was a yellowy white, gently folded in the middle, and propped up against a vase of freshly picked sunflowers.

'Make your way down to the barn, I'll meet you there.' it read.

Ally was surprised that her first reaction wasn't fear. Any other sane human would, upon discovering such an ominous note placed on her kitchen table whilst in the shower, probably reach to dial 911 without a second thought.

Ally wasn't like everyone else, though. She lived outside the crowd, beyond the norms, and on her own little planet, population: 1. So, no, Ally's first reaction was not to imagine that a new Ted Bundy was luring her to the dilapidated barn at the end of her field for nefarious ends, but to take a mental inventory of everyone who knew sunflowers were her favourite of all the flowers.

It was an incredibly short list. As an orphaned product of the care system, Ally naturally looked upon others with mistrust, and built walls around herself so high that sometimes she couldn't see the path ahead of her. She didn't really have 'friends', as such, merely acquaintances with different social zip codes - work, yoga, the baristas she saw way too much of - that was about as far as her social circle expanded.

Where to begin with the story of Jett? He had tumbled into Ally's life on a night where all she'd wanted to do was stare down at the bottom of her glass of bourbon, and then watch it fill up again. Maggie, her bartender 'acquaintance', knew the drill by now - every Friday, 9pm like clockwork, and keep filling up the glass 'til last orders. It was habit for the both of them by now.

That particular night, however, Ally's liquor-laced solitude had been pierced by the army boys just off the bus from the base downtown. They had barged in and filled O'Donnelly's Irish pub with their booming chants, shots slammed down like clockwork every 15 minutes, and wailing attempts to match the classics pumping out of the jukebox. Ally had not signed up for this.

"I'm sorry - I would hate us too if I were you." Ally could smell the patrón before she turned to face him, eyes ready to roll.

"Well you have got my wishing I was deaf so, there's that". She looked over to Maggie, ready to refill her full glass already.

"On behalf of myself, Lieutenant Jett Thulrow, and my men, I apologise profusely, and would like to recompense you by buying that bottle of bourbon behind the bar there. If you'll let me, ma'am"

"We're nothing if not polite and armed with a good vocabulary! Now about that bottle..."

Ally took a break from shaking her head to properly get a look at Lieutenant Jett Thulrow, and instantly knew that she'd made a massive mistake. As her eyes met his, their green auburn swirls read her her future - this was the man she was going to marry. This was the man that was going to single-handedly smash down each and every one of the walls she had so meticulously built, and call back her emotions from the void. In summary, she was totally and irrevocably fucked.

And so it went. Jett came and took Ally off her desert island, and onto the shores of married life. It turned out that a soldier was nothing short of the perfect partner for her - sure, she worried about him, but his long missions away gave Ally the reprieve of solitude that her deep, unfaltering love had taken from her, but that she needed in order to feel like herself. Jett loved her so wholly and completely that Ally sometimes wondered how a human could be capable of such depths of emotion; where did he find the strength to fight for his country, keep himself alive, and keep her feeling like she'd never been unloved in her life?

Well, he did, until the day that he didn't. There had been something about the knock on the door that had told Ally the dream was over before she'd even opened it. Time passed in flashes once she'd recognised their official army lapels. Snippets of conversation - 'IED', 'died in action' - interspersed with sobs that sounded only half-human, hers she supposed. Jett had done what he'd promised he'd never do - he'd left her.

The days and months after passed under the clouds of grief that plagued every moment, waking and asleep. Why was she mourning? Why was she even surprised? Happiness was never meant to be a permanent feature in her life, and she'd been foolish to allow herself to wallow in it whilst it was loaned to her. Never again. Ally would find those bricks that Jett had thrown away, and build her walls taller and taller, until they were insurmountable. Hope and happiness no longer lived with her anymore.

But that morning, as the yellow petals of the sunflowers caught the glint of the pale January sun, the first cracks began to appear in those bricks. Something flickered inside her as she picked up the note and read each word three times over. She pulled on her boots without thinking.

As she padded her way through the long, wet grass, the sides of the ramshackle old barn came into view. She really needed to pull the whole thing down and start from scratch. That was yet another thing she knew she'd never get round to doing. The roof leaked, the door was falling off its hinges, and she wasn't sure the wood it was made out of could truly be considered 'wood' any longer.

Something was different, though. An orange glow was seeping through the cracks in the wooden panels, and Ally wondered for a second if the neighbour's kids hadn't gone and set fire to the place. Nothing was burning, however. Stepping closer, the hanging door gave her a glimpse into the barn, but it was a barn that surely wasn't hers. Every available space was filled with candles, some long and thin, others short and squat, but all glowing with welcome warmth on this misty morning. For once, the incessant train of thoughts in her head came to an abrupt halt.

As her eyes began the lift from the orange lights strewn across the floor, it was the boots that she recognised first. Just off-black enough to get him into trouble on his first day of training. The camo legs cuffed at the bottom because they were always that tiny bit too long for him, were next. The belt that was always buckled on the third hole, almost worn through from use, came in quick succession.

Heart in her mouth, it spoke before her brain could stop her.